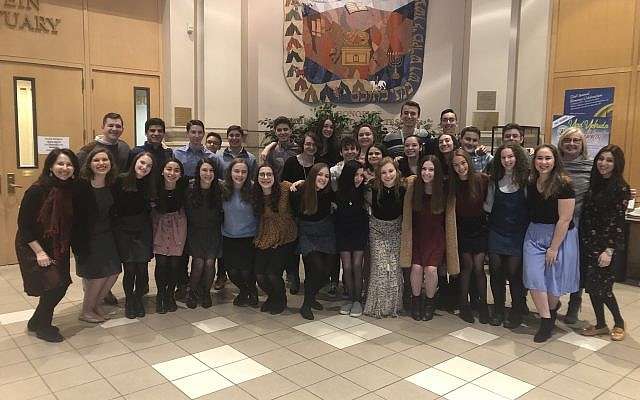 Last Shabbat, January 11th-12th, Beth Sholom Congregation and Talmud Torah in Potomac, Maryland hosted its eighth annual Shir On Shabbat, a Shabbaton devoted to Jewish a cappella curated and founded by indefatigable, Debbie Snyder, a Beth Sholom member and a cappella musician. Growing up in Maryland, Snyder remembers attending Chassidic music festivals that she felt connected her to her Jewish soul. She said, “That music is still with me today.”

This year, several veteran groups performed including JewKvox, founded by Giorgio Kulp, Snyder’s husband and the musical arranger behind many of their songs. Shir Madness, the Charles E. Smith Jewish Day School’s a cappella group has participated since the inception of Shir On. Ethan Kulp, a member of Shir Madness for three years says having growing up at Beth Sholom watching Shir On inspired him to audition and join various a cappella groups when he went to high school

Shir On Shabbat’s presence at Beth Sholom also influenced Joy Drexler, a Beth Sholom member and a cappella parent, to spearhead an a cappella group for first – sixth graders at Beth Sholom. She said, “There are so many musically talented kids in the community. I happen to have one, so I thought I’d try to create this for our community.” 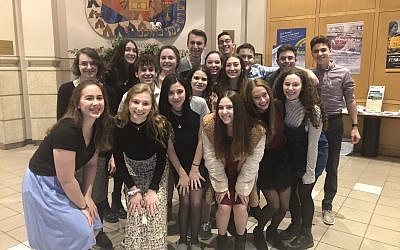 She teamed up with Tova Rubin, Beth Sholom member and musical leader extraordinaire and together they created Kol Tuv, Shir On’s youngest a cappella group to perform. Rubin’s goal as the director of Kol Tuv is to, “find songs that kids would have fun singing, to spark joy in them.” Her philosophy is inclusive. “Each child gets a chance to shine,” she said. The main thing is that the children at this age, ‘have a shared experience of singing together.”

The new groups to sing at this year’s Shir On included, Marak HaYom, a teen lead a cappella group founded fourteen years ago at Beth El in Bethesda, Maryland by musician and then teen Beth El member, Micah Hendler, who arranged most of the groups current songs.

Lilah Katz, the group’s manager, said that her group includes “high school students who want to sing Jewish a cappella music from Reform, Conservative and Orthodox backgrounds, from various schools and shuls.” She enjoyed the welcoming atmosphere at Beth Sholom. 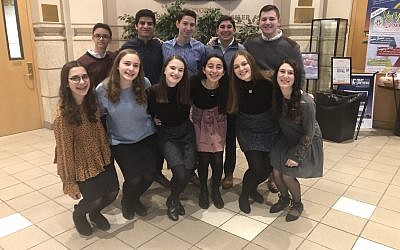 Making their inaugural debut at Shir On was the first co-ed a cappella group from the Berman Hebrew Academy in Rockville, Maryland, a Modern Orthodox school that follows halachic boundaries around ‘kol ishah’, the voice of a woman, in the public sphere.

Maya Goldberg, Berman Hebrew Academy senior and co-president of the Matanotes said, “We felt a lack in the school. Last year we did not have a group perform at the Yom Ha’Zicharon/ Yom Ha’Atzmaut celebration. Starting a new group was a necessity.”

Two years ago, the Berman Beats, a male only a cappella group disbanded after most of their members graduated. Goldberg, a member of the still flourishing girls’ choir that performs for women only, approached Benji Riffkin, a beat boxer and former member of the Berman Beats to collaborate and start the new co-ed group. 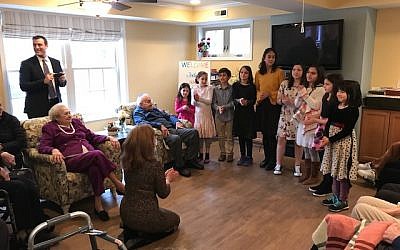 Goldberg and Riffkin met with administrators and students to discuss the possibility of forming this new group. She said according to the p’sak, or rabbinic ruling that the school received, in order for female students to sing publicly, “the number of girls must be close to the same as the number of boys in the group,” so their singing can blend and no one voice can be distinguished.

In addition, she said that “the possibility for girls singing duets is under discussion.” Furthermore, Goldberg noted that fitting the group’s singing into the halacha on kol ishah “… is a compromise. It is really hard. We have some phenomenal girl voices but we have to find arrangements that fit within the p’sak halacha. However, we are being modest and cautious, and I think that is a good thing.”

All of the groups enjoyed the warm community and the large audience for their music that Beth Sholom offers. The audience’s feeling was mutual. Jack Drexler, a 4th grade Kol Tuv singer noted, “I think that singing is just an awesome thing and everybody should have the opportunity to sing and in this way everyone can.”