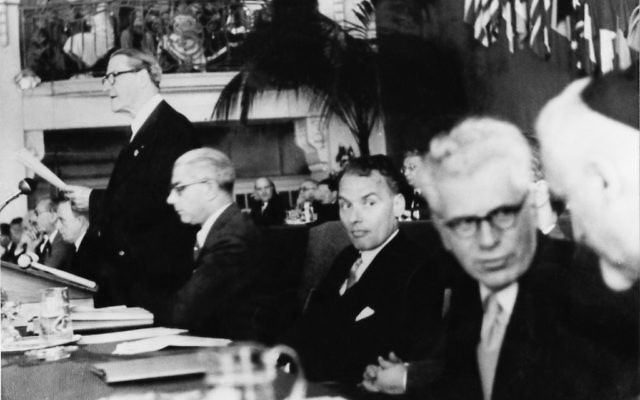 My late teacher and mentor Elie Wiesel once explained that, “In my tradition we have the expression ‘to be like a bow.’ You pull the arrow and you are tense, but you don’t let the arrow go, ever. The tension must be there; you don’t release it. Well, this is what . . . a book should be.” This was my goal for “The World Jewish Congress, 1936-2016,” the newly published history of the preeminent international Jewish human rights organization that I was privileged to compile and edit. The book had to reflect the different tensions and the diversity of voices that have characterized the World Jewish Congress (WJC) ever since its founding in August of 1936 in the shadow of ever increasing persecution of Jews in Nazi Germany.

The WJC has been intrinsically involved in most of the dramatic events that have defined Jewish history over the course of the past 80 years, from the darkest hours of the Shoah to the fulfillment of the Zionist dream. It was the WJC that first alerted the free world that Nazi Germany was implementing a plan to annihilate European Jewry, and it was the WJC’s Swedish Section that devised and financed Raul Wallenberg’s mission to provide life-saving visas to the Jews of Budapest.

After the end of World War II, the WJC became the principal political advocate on behalf of the Jewish survivors of the Holocaust forced to live in Displaced Persons camps in Germany, Austria and Italy. During the 1950’s and early 1960’s, the organization engaged in its high-level diplomatic negotiations that enabled Jews from Morocco, Tunisia, and Algeria to emigrate to Israel, France, and elsewhere.

In more recent years, the WJC has been a key force in the efforts to persuade European governments to provide restitution for property looted from Jews during the Holocaust. The WJC has also been a stalwart ally of the State of Israel in the international arena, and is today at the forefront of the fight against any delegitimization of the Jewish state.

About two years ago, when World Jewish Congress President Ronald S. Lauder and CEO Robert Singer first told me that they wanted to publish a comprehensive account of the WJC’s first eight decades, we opted not to have a single historian write an academic, chronological study based primarily on archival research. Instead, wherever possible, we invited individuals who had personally participated in the WJC’s activities and accomplishments to write first-person accounts for the book. In addition, we asked scholars with particular expertise to contribute chapters about notable episodes of the WJC’s history.

Thus, Monsignor Pier Francesco Fumagalli, vice prefect of the Biblioteca Ambrosiana in Milan, recalls the pioneering role of the WJC’s Gerhart M. Riegner in crafting a new Catholic-Jewish relationship. Gregg J. Rickman, who led the US Senate Banking Committee’s examination of Swiss banks and their treatment of Holocaust-era assets during and after World War II, describes how the WJC and its then President Edgar M. Bronfman spearheaded the campaign to force Swiss banks to disgorge more than one billion dollars they had wrongfully withheld from Jewish Holocaust victims and their heirs.

Eli Rosenbaum, the longtime head of the US Justice Department’s Office of Special Investigations, who oversaw the WJC’s exposure of the Nazi past of a former UN Secretary General and Austrian presidential candidate, gives a fascinating insider’s account of the notorious Waldheim Affair.

Natan Lerner, the director of the WJC’s Israel Branch from 1966 until 1984, writes about the WJC’s relationship and interactions with the State of Israel. Evelyn Sommer, chairperson of the WJC’s North American Section, depicts the instrumental part played by the WJC in fighting against and ultimately rescinding the UN resolution equating Zionism with racism. Maram Stern, the WJC’s deputy CEO for diplomacy, reminisces about the complexities of attempting to maintain relations with Jewish communities in communist countries during the Cold War years.

Author Gregory J. Wallance chronicles the WJC’s rescue efforts during the Holocaust years; legal historian Jonathan A. Bush discusses the invaluable assistance provided by the WJC’s legendary Jacob Robinson to the prosecutors at the post-World War II International Military Tribunal at Nuremberg; Professor Suzanne Rutland describes the WJC’s internal controversies over how best to address the plight of Soviet Jewry; and Professor Michael Brenner writes about the moral and intellectual debate over the post-Holocaust future of Jewish life in Germany.

WJC CEO Robert Singer describes the organization’s broad array of present-day diplomatic initiatives, programs, and activities, including its intensified efforts to support and protect Jewish communities across the globe threatened by resurgent anti-Semitism and terrorism.

For the past 10 years, the WJC’s persona has been shaped primarily by Ambassador Lauder, who has imbued the organization with a distinct sense of purpose focusing on the challenges confronting the Jewish people and Jewish communities across the globe in the 21st century, as well as, perhaps most importantly, on providing opportunities for the young Jewish leaders of tomorrow.

“There is an old Hasidic tradition,” Ambassador Lauder writes in the book’s concluding chapter, “that inside every Jew there burns a flame. Sometimes that flame is obscured, and the person can’t see it. But it is always there, it is always burning. All you have to do is dust off your heart and you will find it. … And this is the job before us now. We have to help our children and our grandchildren dust off their hearts. We have to help them rediscover that Jewish flame inside them.”

The book also contains speeches delivered by the WJC’s former presidents at critical moments in the recent history of the Jewish people.

“We Jews do not profess to be neutral as between democracy and dictatorship,” Rabbi Wise declared prophetically at the WJC’s War Emergency Conference in Atlantic City, New Jersey, on Nov. 26, 1944, “as between freedom and enslavement, as between religion – which is the worship of God the Father and the doing of justice to one’s brother man – and … idolatry, which is the worship of man and the unjust enslavement of one’s fellow man.”

“The State of Israel requires a strong Jewish Diaspora,” Dr. Nahum Goldmann said at the WJC’s second plenary assembly in Montreux, Switzerland, on June 27, 1948, “just as the Jewish [Diaspora] requires the State of Israel. The greatest reserve line in support of this Jewish state … will for years be a strong and united Jewish people, ready to support it morally, spiritually and practically. The existence of the State of Israel, on the other hand will … give the Jewish people a voice among the nations of the world, and put an end to the anonymity of Jewish existence.”

These words remain as relevant for us today as they were when they were first uttered. It is our hope that the WJC’s past accomplishments will continue to be a foundation for its future, and that The World Jewish Congress, 1936-2016 will take its place as an essential resource not just for an understanding of the World Jewish Congress, but for anyone interested in Jewish political history of the twentieth and early twenty-first centuries.