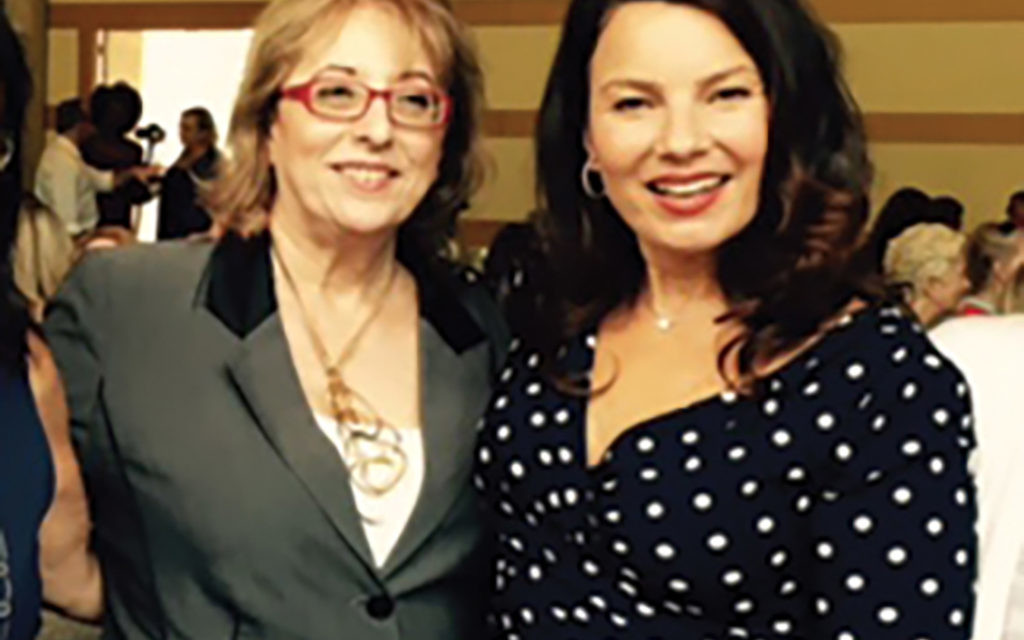 Dr. Tamar Peretz is the director of Hadassah’s Sharett Institute of Oncology in Jerusalem and interim director general of the Hadassah Medical Organization in Jerusalem; at Hadassah, she leads the team whose genetic research and clinical studies have led to groundbreaking discoveries on BRCA1 gene mutations in the Ashkenazi community and new prevention, diagnosis and treatment approaches.

We caught up with her earlier this month when she was in New York to participate in a panel at the Cancer Schmancer Women’s Health Summit, which was organized by actress Fran Drescher, a breast cancer survivor, and co-sponsored by Hadassah. This interview has been edited and condensed.

What is the best cancer screening protocol?

There are two genes, the BRCA1 and the BRCA2, that we know a lot about; we know more and more that there are other genes that are involved in the disposition to develop breast cancer and other tumors.

Statistically, out of 10 women that we know have a genetic disposition, only five will test positive for BRCA1 and BRCA2, and the other five have other genes [that also are associated with cancer]. Some of them [the other genes] have been already identified and some of them, we know that they exist, but they are not really well identified or well described. So today — and I think this will be more true in the future — it’s not enough to test only for BRCA1 and BRCA2. It is rather more important to test for the [entire] panel [of genes associated with breast cancer].

Most of this kind of research is still underway but the most important gene that [has been identified so far] is called PALB2.

Should every Ashkenazi woman be tested?

In the Jewish non-Ashkenazi population, we are not sure about the frequency, but at Hadassah, we’ve identified mutations common in other ethnic groups, mainly Jewish communities that came from Yemen and Kurdistan as well as Sephardic Jews.

How important is family history?

That is why we have to discuss with the woman the pros and cons of the test, because on one hand, it may save lives but it can also ruin lives.

If, for example, a woman who is 25 and who doesn’t have a family history of cancer tests positive for BRCA, I’m not sure what she’s going to do with the information. For example, we recommend the carriers do a hysterectomy at the age of 38 or 39. She’s 25. So this woman has the information, but there is no outcome for this information.

In addition, for some women, testing positive has a very negative emotional impact. It can affect their lives. I have had the experience of some women who became very depressed, upset. So I think it’s only after thorough discussion and evaluation and understanding [of] what is the meaning of testing, only then the testing should be pursued.

So what kind of general guidelines should a woman follow — should she wait until a certain age before she is tested?

If a woman doesn’t have any family history of cancer, I don’t think there is any point before the age of 30 to do any genetic testing.

Now about the consequences of the testing: We know today that the BRCA genes make you disposed not only to breast and ovarian cancer but also to pancreatic cancer and prostate cancer — particularly after the age of 50. So when we find out a woman is positive for BRCA, she should enter a high-risk clinic with frequent testing.

You mentioned the risk of 1 in 40 is for men and women. Do men have the same risk of having the BRCA gene as women and therefore are as likely to get cancer as women?

Men have the same frequency of being a carrier, but for men, predisposition is not as great for having cancer as women. Men could have breast cancer. Men, and particularly men with the BRCA2, they can have prostate and pancreatic cancer and also colon cancer. So if they are tested positive, especially if they are after the age of 50, they should enter a screening program. And obviously if they have the gene they can pass it on to their daughters.

You mentioned that testing can ruin lives and mentioned depression. Is there any other way that having testing could ruin lives?

I think the major factor is the emotional part, but also there are some women that — and this is my opinion — they go too quickly into unnecessary operations. So every step should be thought out carefully and they should proceed very, very slowly.

I don’t think it should be done quickly, like a vaccination or like a blood pressure test. It’s not so simple.

And when you say family history, are you talking about any kind of family history or only if her mother was diagnosed with breast cancer below a certain age?

No, no. Once we thought that only [a] younger [diagnosis] was a sign of being genetically predisposed. Today we know that even cancer at an older age can be a result of genetic predisposition.

What’s the latest research on how often women should have mammograms, and beginning at what age?

For women who are high-risk, for example, those that test positive for BRCA and that have a strong family history, I think that they should not have mammograms before the age of 35, because mammogram is radiation. And we know that women that carry one of the genes are probably more sensitive to radiation than the rest of the population, particularly when exposed to radiation at a young age.

On the other hand, we know today that an MRI is a very good tool to screen for breast cancer in carriers. So women who test positive should have MRIs every year from the age of 25, combined with the ultrasound.

I think that in general — not in the predisposed situations I was speaking about before — a woman should have mammograms after 50 once every two years.

Below the age of 50, you get a lot of false negatives — about 40 percent — because of the hormones that a woman has before the age of 50.

The sensitivity of the test is not 100 percent. In addition to the hormones, there is a type of tumor — the lobular carcinoma — that does not show on mammograms. Sometimes they grow to two or three centimeters and the mammogram is normal.

So if there is anything suspicious, if the woman is feeling crappy, if she is high-risk, that means she should also have an MRI. And obviously physical examination is very important — it’s part of a physical exam that a woman should have once a year.

How important is it for a woman to examine herself?

I think that a woman should be aware of her body, should look at herself, should examine herself in a superficial way and see if there is any change generally in her body, including the breast. Is there a change in the nipple? Is there a discharge? Is there a retraction of the skin? A change in the size?

Anything else that people should know about breast cancer right now?

I think it’s important to know that we divide breast tumors into five different subtypes and that for the types that develop very fast, if there is no recurrence with and four or five years, then really it’s been cured. And for those where the rate of doubling is lower — these are called luminal — there may be a recurrence even after the seventh, eighth, up to 12 years. So a woman has to know that if she had breast cancer of this type, she should stay in follow-up of her breast cancer from more than five years.

I think it’s important to add that today there are many good treatments for cancer, and every day there’s a new development, so we have good reason to be very optimistic and very positive.