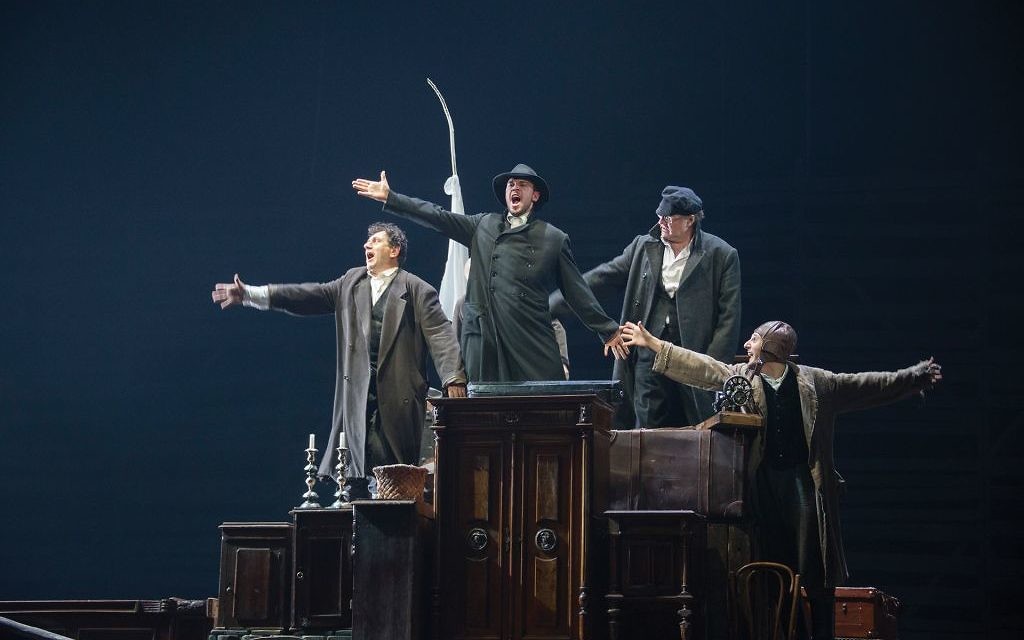 Actors are typically front and center in our own theater, but the Russian stage has been dominated, for at least the last century, by the director. Konstantin Slanislavski, Vladimir Nemirovich-Danchenko and Vsevolod Meyerhold famously reshaped their actors’ bodies and minds in order to enable the expression of profound emotion.

This weekend, the Moscow-based Vakhtangov State Academic Theatre of Russia, helmed by Lithuanian director Rimas Tuminas, will present “Smile at Us, Oh Lord,” a play by the Lithuanian Jewish playwright Grigory Kanovich that metaphorically examines the Jewish experience in the first half of the 20th century. The play is presented under the auspices of the Cherry Orchard Festival, which last year brought the Vakhtangov’s adaptation of Alexander Pushkin’s “Eugene Onegin” to New York. “Smile at Us,” which is performed in Russian with English supertitles, runs for four performances at City Center.

Adapted from two of Kanovich’s novels, “Smile at Us” takes place in a Lithuanian shtetl where the son of an elderly Jewish stonecutter has attempted to assassinate the governor general; the perpetrator has been thrown into jail in Vilna. The play centers on the father, Efraim Dudak (played by three different actors in rotation), who travels on a horse cart to the city, along with two of his friends, to visit his son before the son’s execution or exile to Siberia. Along the way, the three men face a series of calamitous setbacks, including being attacked by wolves and drafted into the czar’s army.

Kanovich, 85, is a prolific poet, prose artist and playwright. He was born in 1929 into an observant Jewish family in the town of Jonava, near Kaunas; he miraculously escaped the pogrom carried out by the Nazi occupiers and their Lithuanian accomplices in the summer of 1941 and made aliyah in 1993; he was feted last year on his 85th birthday at a ceremony in Tel Aviv.

Tuminas, 63, directed many acclaimed productions in Lithuania before being hired to direct the Vakhtangov (the most popular troupe in Russia) in 1997. In a program note, he called the characters’ journey a “pilgrimage to the Promised Land” of Vilna, where the bulk of the Jewish population of Lithuania resided. The horse cart on which they travel, which is made up of various suitcases, is, he noted, an “Ark of Hope” they protect despite horrifying prophetic visions of the Holocaust. And the Holocaust, in turn, is symbolized by a milk-giving goat (played by Yulia Rutberg), which, as in the paintings of Marc Chagall, ultimately faces sacrifice.

The characters, Tuminas wrote, “trust to their destiny but forebode the final catastrophe.”