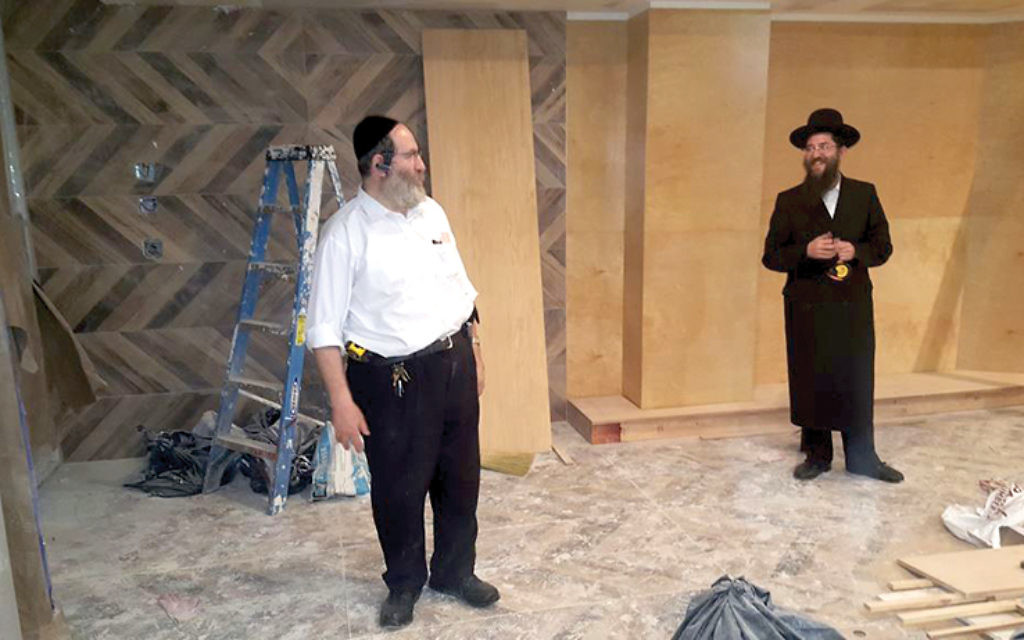 A middle-aged, unmarried member of the area’s chasidic community asked him, “So, when are you opening?”

The question was about Masbia’s new Borough Park storefront location.

Rapaport, executive director of the Masbia network of kosher soup kitchens, had good news for the down-on-his-luck man, a longtime regular at Masbia’s former site in the neighborhood. That site closed last year after a decade, when the landlord decided to redevelop the property. It reopened in the Boro Park Y but closed down again about two months ago.

The new Borough Park site will open in the next few weeks, Rapaport said.

Rapaport is in the middle of a fundraising drive including a crowd-funding campaign that went online this week to help cover Masbia’s annual budget of “close to $3 million.” That money will fund all three of Masbia’s sites; the organization has soup kitchens in Rego Park and Flatbush as well as in Borough Park.

The new location on New Utrecht Avenue, in a former grocery store near the heart of the neighborhood, is a block from the 24-hour Shomrei Shabbos synagogue that has become a drop-in center for needy members of the community, and a block from the 55th Street D-train station. With polished wood floors and cloth-covered tables, it will be more than 1,200 square feet, nearly double the former site, and will have seating for almost “double the amount” of the 30 to 40 people that the soup kitchen previously could accommodate for dinner.

The new, ecologically “green” site will include a food pantry. It will also be open daily and for longer hours and will, for the first time, serve meals on Shabbat and Jewish holidays, Rapaport said.

While most of Masbia’s diners and donors are Jewish, the ranks of men and women who eat the organization’s meals (which are served at the tables by volunteer waiters) include many non-Jews, both Christians and Muslims, he said. Literature distributed at Masbia comes in six languages: English, Hebrew, Yiddish, Russian, Spanish and Mandarin.

“We happen to be kosher,” under the supervision of local kashrut certification organizations in nearby Flatbush (home to a large “black hat” yeshiva-type population) and in Queens’ Rego Park (where a large number of émigrés from the former Soviet Union live).

The Borough Park location served eight meals the night it opened 11 years ago. “The Restaurant with No Cash Register,” People magazine called the effort that it termed an “experiment in feeding the hungry.”

As the need grew in the Jewish community, the two other sites opened. There was also one in Williamsburg that operated from 2009 to 2013.

Masbia’s three locations now serve some two million meals a year, including hot dinners served onsite and groceries given to people who prefer to prepare their own meals at home, said Rapaport, who co-founded Masbia in 2005 with Mordechai Mandelbaum, a fellow member of the chasidic community.

“There are those … who prefer to be eating in their own kitchens,” Rapaport said. “We prepare groceries so that every member of the family will have food for three meals for three days.”

The establishment of Masbia (Hebrew for “satiate”) followed the release of a 2003 report by the Metropolitan Council on Jewish Poverty that found that 30 percent of Brooklyn’s Jews were living at or below the poverty line.

Each year the number of people who turn to Masbia for daily sustenance goes up, Rapaport said. “More people are ending up at our doors. Every year we serve more and more.” For many hungry people, it’s a place of last resort. “Word spreads and we get people from all over the city, not only the immediate neighborhood,” he said.

Masbia raises 90 percent of its funds from “plain old charity,” donations from thousands of supporters, Rapaport said. The rest comes from the city and state. Food, 30,000 pounds each week, is donated from farmer markets’ unsold produce, and from several food banks, including City Harvest and the Food Bank for New York City. “Our chefs have become masters of randomness” in preparing each day’s meals, he said. “We don’t know what our donations will be.”

Among Masbia’s diners are individuals who have lost their jobs, who are suddenly poor, who don’t qualify for government benefits or lack the language skills or ability to apply for government aid. “We get the people who are on the fringe [of society],” he said.

The organization’s website (masbia.org) features giving opportunities for such items as tables, a “ritual hand washing sink,” a mezuzah, naming rights for the soup kitchen and “a beautification project” at the soon-to-open location. Masbia has also opened a registry on Amazon.com for donors to purchase other needed items.

What have Masbia’s diners done since the location at the Boro Park Y closed around Passover?

They turned to relatives or friends or sought out other soup kitchens, Rapaport said. Some, he said, made their way to Masbia’s other sites.

That’s probably what the man whom he encountered on the streets of Borough Park last week did, Rapaport said. “I would guess he might go to Flatbush.”

To donate go to: masbiaboropark.org/capacitycampaign.