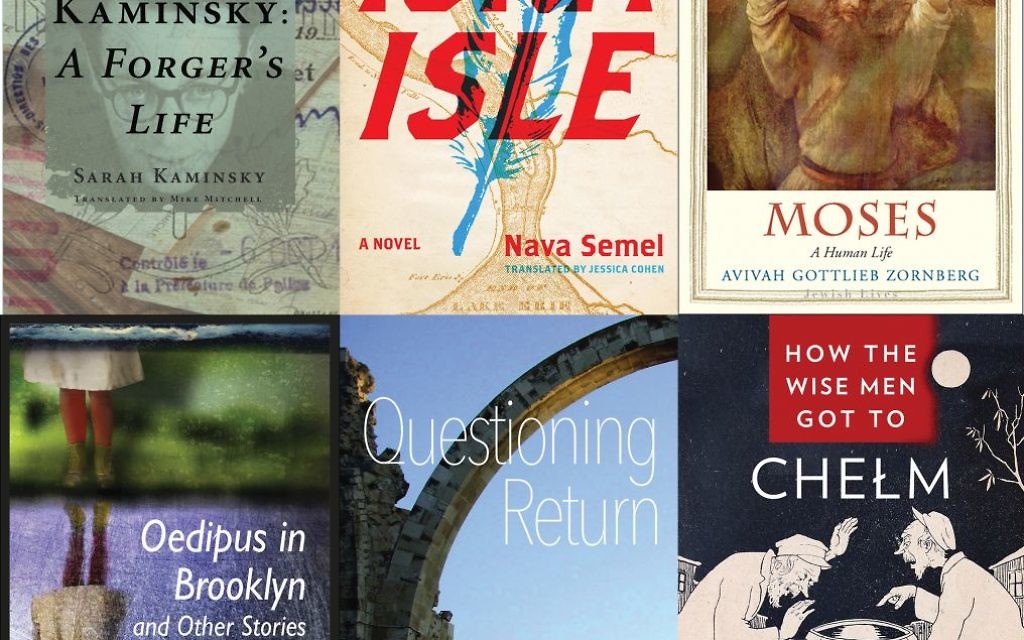 An English-language debut of author Yiftach Reicher tir, a former brigadier general of intelligence in the Israeli army, “The English Teacher” (Penguin) is a psychological spy thriller featuring a female former Mossad agent who disappears. (September)

“Mischling” by Affinity Konar (Lee Boudreaux) is a tale of brave twin girls — narrated by both of them — who survive the evils of World War II, including Dr. Mengele at Auschwitz. (September)

From Meir Shalev, “Two She-Bears” (Schocken) unfolds in 1930 on a moshav. It is a story of violence, retribution and love that plays out into the present. (September)

Inspired by true events, “Karolina’s Twins” by Ronald H. Balson (St. Martin’s Press) is the imagined story of a Holocaust survivor’s return to Poland to fulfill a promise to track down a pair of sisters lost during the war. (September)

“Questioning Return” by Beth Kissileff (Mandel Vilar Press) explores issues of faith, identity, authenticity and community as an American graduate student sets off to Israel looking into the lives of those who choose to “return” to Judaism. (October)

A novel of alternate Zionist history, “Isra Isle” by award-winning Israeli author and playwright Nava Semel (Mandel Vilar Press) is inspired by the true story of Mordecai Manual Noah who dreamed of a Jewish homeland near Niagara Falls. (October)

“Judas” by Amos Oz (Houghton Mifflin Harcourt) involves a trio sharing an old Jerusalem stone house in 1959 — a brilliant but difficult old man, a young biblical scholar serving as his caretaker and the 40-something daughter of a deceased Zionist leader. The book is about love, faith and Israel, with parallels to the biblical tale of its title. (November)

Told as a deathbed story, from grandfather to grandson, “Moonglow” by Michael Chabon (Harper) is inspired by a visit the author had with his own grandfather when he was terminally ill. The novel shifts between a Jewish neighborhood in South Philadelphia in the prewar years to wartime Germany to a retirement community in Florida, evoking an era with focus on family, faith, wartime adventure, the space program, love and the act of storytelling. (November)

A debut novel, “The Waiting Room” by Leah Kaminsky (Harper) is set in Israel, where a doctor, the daughter of Holocaust survivors, tries to come to terms with the traumas that her parents faced — that shaped her own early life — and the present conflict between Palestinians and Jews, shadowed by threats of terror. (November)

Aphrodite and the Rabbis: How the Jews Adapted Roman Culture to Create Judaism as We Know It” by Burton L. Visotzky (St. Martin’s) offers a historical perspective on Jewish life in the Roman empire and its connection to Judaism today. (September)

A memoir of perseverance, Elizabeth Rynecki’s “Chasing Portraits: A Great-Granddaughter’s Quest for Her Lost Art Legacy” (New American Library) details her search for the art that her great-grandfather lost during World War II. (September)

“Adolfo Kaminsky: A Forger’s Life” by Sarah Kaminsky (DoppelHouse Press) is the author’s story of her father, a photographer who was recruited to help the Resistance during the Nazi occupation of France, and became their primary forger. He later used his skills to help Jewish refugees get to Palestine, and to fight other injustices around the world. It was only when Adolfo was almost 80 that his daughter convinced him to tell of his clandestine past. (September)

“Asylum: A Survivor’s Flight from Nazi Occupied Vienna Through Wartime France” by Moriz Scheyer (Little, Brown) is a recently uncovered memoir written by an Austrian-Jewish literary critic and essayist who served as arts editor at one of Vienna’s major papers before the Germans invaded in 1938. His stepson, who disliked the anti-German tone of the book, destroyed it, but a step-grandson recently found a copy, translated it and provides an epilogue. Here, Scheyer details his persecution in Vienna, his flight to France and the brave people who helped him, and his hidden life in a convent. The memoir was written at the time of the events and completed in 1945; Scheyer survived with the help of the French resistance, and died in 1949. (September)

In her memoir “Treyf: My Quest for Identity in a Forbidden World” (NAL), Elissa Altman describes her Jewish upbringing in the 1960s and 70s, an emotional landscape full of contradictions, yearnings and dark secrets. (September)

“Let There Be Laughter: A Treasure of Great Jewish Humor and What It All Means” (William Morrow) is compiled by Michael Krasny, a scholar and public-radio host who has been telling jokes since his bar mitzvah. (September)

A comprehensive biography of the scholar who is considered the father of modern Jewish studies and has written more than 1,000 books, “Jacob Neusner: An American Jewish Iconoclast” by Aaron W. Hughes (NYU Press) covers the contours and controversies of his long career. (October)

“The Jews of Harlem: The Rise, Decline and Revival of a Jewish Community” by historian Jeffrey S. Gurock (NYU Press) delves into New York’s urban history as well as the subject of African-American Jewish relations. Gurock traces the beginnings of the Jewish community in Harlem from 1870, and then its flourishing to become the second largest Jewish community in America by World War I. He follows the dispersal of residents and then the more recent return, which is, still, as he says, a work in progress. (October)

A collection of original essays by the Tony Award-winning playwright, Richard Greenberg’s “Rules for Others to Live By: Comments and Self-Contradiction” (Blue Rider) includes the author’s artful musings about friendship, writing, parents, health and hypochondria, and New York City, where he has lived along the same 3-block stretch for decades. Greenberg’s newest play “The Babylon Line” will open in Lincoln Center this December. (October)

“How the Wise Men Got to Chelm: The Life and Times of a Yiddish Folk Tradition” by Ruth von Bernuth (NYU Press) is a lively scholarly study of Chelm stories and their historical and literary context, with references ranging from Woody Allen to folklore to contemporary reworkings of stories about these foolish souls who turned up in one Polish village. (October)

“Israel: A Concise History of a Nation Reborn” by Daniel Gordis (Ecco) follows the growth and development of the State of Israel, from its birth to present times, tracing cultural, political, military and economic threads, and looking ahead to its future.

“We Were The Future: A Memoir of the Kibbutz” by Yael Neeman (Overlook) tells of the experience of the children of the kibbutz movement, as their parents pioneered an attempt to live under total equality. The author, a best-selling Israeli novelist, writes in the first-person plural, the way she and her fellow kibbutznik kids grew up talking, and thinking. (November)

In “Thinking about the Torah: A Philosopher Reads the Bible” (JPS), Kenneth Seeskin, an author and professor at Northwestern University, draws on Western and Jewish philosophy to look closely at 10 core biblical verses, their deeper meanings and the ideas they suggest about ethics, holiness, love and existence. (November)

“The Resistible Rise of Benjamin Netanyahu” (Bloomsbury) by Neill Lochery, a British scholar of Middle East politics and history, is the first English-language biography of the prime minister of Israel. (November)

“Moses: A Human Life” by Aviva Gottlieb Zornberg (Yale) is the newest title in the Jewish Lives series, with the renowned teacher and author turning her distinctive scholarly, psychoanalytical and literary eye to the inner life of Moses. (November)

A much-admired book on contemporary spirituality, gathering more than 3,000 years of Jewish inspirational thought on the metaphor of light, “The Lamp of God: A Jewish Book of Light” by Freema Gottlieb (Amazon) is newly available again, in a Kindle edition.