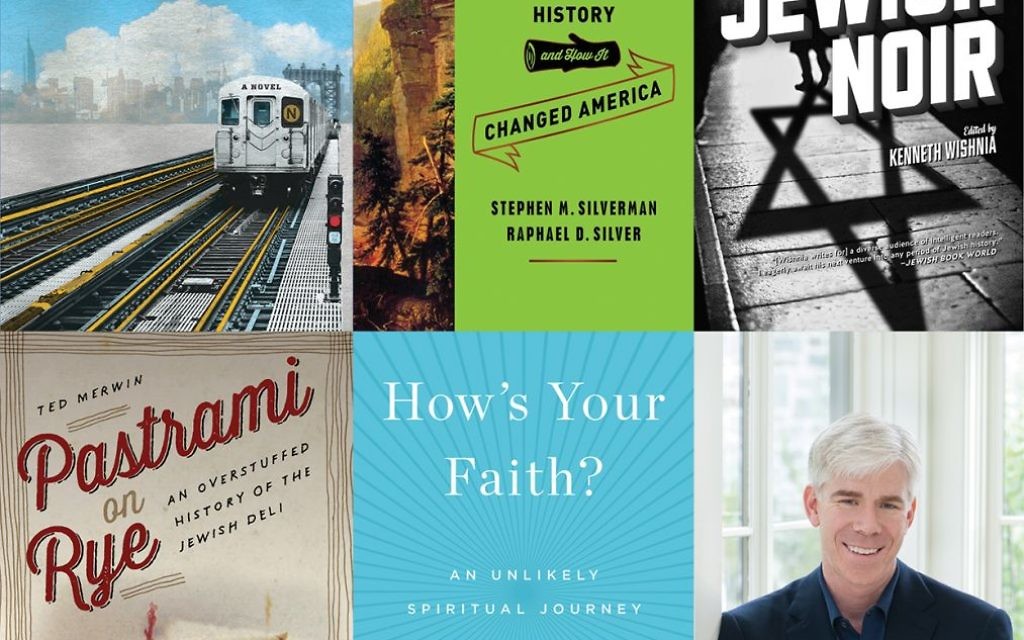 ‘The Ambassador” by Yehuda Avner and Matt Rees (Toby Press) is a fictional revision of historical events, based on the premise that the State of Israel came into being before the Holocaust. In 1937, the new nation’s first ambassador to Berlin works tirelessly to save Jews. (September)

Inspired by the true story of Suleiman, an Ottoman sultan who rescued thousands of Jews from the Inquisition, “The Debt of Tamar” by Nicole Dweck (St. Martin’s) is an imaginative family saga set over centuries, intertwining two families, one Jewish, one Muslim. (September)

A landmark three-volume set, “The Complete Works of Primo Levi” (Norton) includes all of the books by the esteemed Italian writer who survived the Holocaust — memoirs, poetry and fiction — in new translation, with an introduction by Toni Morrison. (September)

In this coming-of-age story, “The Sea Beach Line” by Ben Nadler (Fig Tree Books), a young man searches for his estranged father after his mysterious disappearance. Along the way, the son gets tangled in his father’s dealings and also with Talmudic and chasidic tales. (October)

“Jewish Noir” edited by Kenneth Wishnia (PM Press) is an anthology of new crime and other dark stories by leading writers, including S.J. Rozan, Marge Piercy and others, along with two vintage reprints. (October)

An inventive debut novel, “The Mystics of Mile End” by Sigal Samuel (Morrow) is set in the Montreal Jewish neighborhood of Mile End, with questions of faith, religion and identity swirling about, as each member of a family dabbles in the Kabbalah.

“The Muralist” by B.A. Shapiro (Algonquin) is a story of art, history, politics and mystery, involving the disappearance of an American painter — friend of Eleanor Roosevelt and noted artists — in New York in 1940; her great niece searches for answers 70 years later.

Peter Golden’s “Wherever There is Light” (Atria) tells a story of 20th century America, through the long and complicated romance of a German-Jewish immigrant (who makes a fortune in bootlegging and real estate) and a photojournalist who’s the granddaughter of a slave (November).

A timely study of Israel’s water mastery, “Let There Be Water: Israel’s Solution for a Water-Starved World” by Seth M. Siegel (St. Martin’s) suggest a way out of the looming global water crisis by following Israel’s innovations. (September)

The title of David Gregory’s new book, “How’s Your Faith: An Unlikely Spiritual Journey” (Simon & Schuster) is drawn from a question President George W. Bush asked the author when he was covering the White House for NBC-TV. Gregory, who was raised in an interfaith family, was inspired to examine his own faith when he married a Protestant woman. (September)

“Black Earth: The Holocaust as History and Warning” by Timothy Snyder (Tim Duggan/Crown) is both a provocative historical analysis — based on newly available archival sources and the voices of survivors — and an admonition for our times.

Another chapter in the unfolding story of Holocaust art and its provenance, “Hitler’s Art Thief: Hildebrand Gurlitt, the Nazis and the Looting of Europe’s Treasures” by Susan Ronald (St. Martin’s) provides the background of a story that came to light when more than a thousand works of art, valued at more than $1.35 billion, were found in a tiny Munich apartment. (September)

“Rywka’s Diary: The Writing of a Jewish Girl from the Lodz Ghetto” (Harper) is a teenager’s notebook found at Auschwitz by a Red Army doctor in 1945. It is now published in English for the first time, with essays and commentary. The diary ends in the middle of a sentence. (October)

A collection of true stories by an award-winning novelist, “My Father’s Guitar and Other Imaginary Things” by Joseph Skibell (Algonquin) touches on the small moments in life — the daily annoyances, slip-ups, intimacies and mysteries. (October)

Told with insight, delicious details and wisecracking waiters, Ted Merwin’s “Pastrami on Rye: An Overstuffed History of the Jewish Deli” (NYU) is a culinary and cultural study. Merwin, who covers theater for The Jewish Week, skillfully captures the theatrical nature of this American institution and its historical significance. (October)

“Between Gods” (Harper) is best-selling novelist Alison Pick’s memoir of reclaiming her history and identity as a Jew. She undergoes conversion in mid-life, after learning of her family’s secret, that her paternal grandparents were Czech Jews who fled to escape the Nazis.

“Here and There: Leaving Hasidism, Keeping My Family” by Chaya Deitsch (Schocken) stands out from other books in this new genre of memoir, in that the author remains connected to her Lubavitch family even after she decides that she can no longer follow their path. (October)

“When religion turns men into murderers, God weeps,” Rabbi Jonathan Sacks cites from the book of Genesis, as he opens his latest work, “Not in God’s Name: Confronting Religious Violence” (Schocken). He goes on to show that religiously inspired violence is based on misreadings of the text. (October)

In “Killing of a King: The Assassination of Yitzhak Rabin and the Remaking of Israel,” (Norton), Dan Ephron provides a detailed account of the two years leading up to it, closely studying the lives of Rabin and his assassin. Ephron hints at the question that none can answer, of what might have been. (October)

“The Catskills: Its History and How It Changed America” by Stephen M. Silverman and Raphael D. Silver (Knopf) is an illustrated history of “America’s original frontier,” including the region’s role in the Civil War, its appeal to novelist Washington Irving and the Hudson River School painters, and the evolution of the Borscht Belt. (October)

“Emblems of the Passing World: Poems After Photographs by August Sander” by Adam Kirsch (Other Press) is a gem, presenting new poems by the noted writer and critic. The poems were inspired by (and appear next to) Sander’s well-known portraits of ordinary people in Weimar Germany.

Beginning with the birth of the State of Israel, Dennis Ross’s new book, “Doomed to Succeed: The U.S.-Israel Relationship from Truman to Obama” (Farrar Straus Giroux) is full of historical detail and an insider’s analysis. Ross has been at the center of Middle East policy in four administrations, and has worked closely with every Israeli prime minister since Yitzhak Shamir in 1980s. (October)

“The 613” (Blue Rider Press) presents a series of paintings by celebrated painter Archie Rand. They transform the 613 commandments into striking and original images. (November)

A literary memoir that covers territory rarely explored, Elliot Jager’s “The Pater: My Father, My Judaism, My Childlessness” (Toby Press) probes the meaning of life for a Jewish man without children. The author looks back at his own father — a Holocaust survivor who deserted Jager and his mother — and then reconnects with him many years later, and also at his relationship with God. He weaves interviews with other childless Jewish men, whether single or married, gay or straight, into the narrative. (November)

Erica Brown presents an informed blend of spiritual guidance and practical know-how leavened with stories in “Take Your Soul to Work: 365 Meditations on Every Day Leadership” (Simon & Schuster). (December)