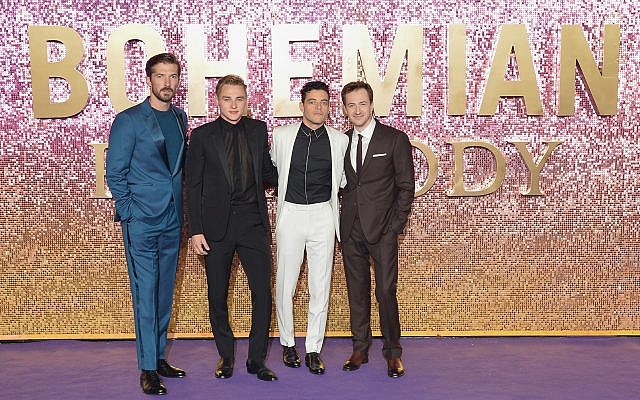 The long-awaited biopic “Bohemian Rhapsody” was released in theaters on Nov.2. The movie, directed by Bryan Singer and Dexter Fletcher, details the journey of the Rock and Roll Hall of Fame inducted band Queen and focuses on the life of the late lead singer Freddie Mercury. Queen, and Mercury specifically, defied stereotypes within rock and roll, as well as the larger pop culture community. Mercury never publicly revealed his sexual orientation, but he began to openly have male partners in the late 1970s and early 1980s. The speculation around Mercury’s personal life added to the airs of mystery surrounding the band.

Rami Malek, who portrays Mercury in the movie, said in an interview with Jimmy Kimmel that he was originally noticed by the producers, Graham King and Dennis O’Sullivan, for his jawline, which held a likeness to Mercury’s. The resemblance of the actors to the actual band members is almost uncanny; Joseph Mazzello was cast as John Deacon, Queen’s guitarist, Gwilym Lee is portrayed Brian May, the band’s keyboardist and Ben Hardy was cast as Roger Taylor, Queen’s drummer. Though each member grows with the band, Mercury’s life was the most conspicuous and became the focus of the film.

The film—now nominated for two Gloden Globes—opens with Queen’s interpretation of the 20th Century Fox Fanfare, which is featured on the film’s soundtrack as well. The album was released by Queen in conjunction with the movie in order to give fans both classic songs as well as newer options, such as recordings from the band’s show at the “Live Aid” Festival in 1985.

The band’s most well-known songs, “Bohemian Rhapsody,” “Somebody to Love,” “We Are the Champions,” “We Will Rock You,” “Another One Bites the Dust,” “Love of My Life,” “Crazy Little Thing Called Love” and more are used to back the plot. The creation of each song is detailed, and the audience is shown how each connects to events in the band’s, and specifically Mercury’s, lives.

The movie broaches topics that were sensitive in the 70s and 80s, and are still prevalent today. These include the acceptance of young adults by their parents, acceptance of homosexuality and stigmas surrounding human immunodeficiency virus (HIV) and acquired immunodeficiency syndrome (AIDS). These issues, though not fully resolved, affected Mercury, and the band as a whole, throughout their career.

Much of the Jewish community was supportive of equal rights for the LGBTQ+ community in the late 1970s. However, the Torah condemns this act in Leviticus 20:13, saying “If a man lies with a man as one lies with a woman, both of them have committed an abomination; they shall surely be put to death; their blood shall be upon them.” One solution to this predicament is the idea that being homosexual is not something one has a choice in; it is just the way a person is. Openly gay people are welcomed into the Reform movement because of this idea.

“Bohemian Rhapsody,” though not a feel-good family movie, leaves viewers with a sense of returning to a fond memory, due to the use of classic and familiar rock music. The band is instantly recognizable, emphasizing the quote from the movie: “every band is not Queen.”

Sloane Warner is a senior at The Weber School in Atlanta. She is a member of Fresh Ink for Teens’ Editorial Board.