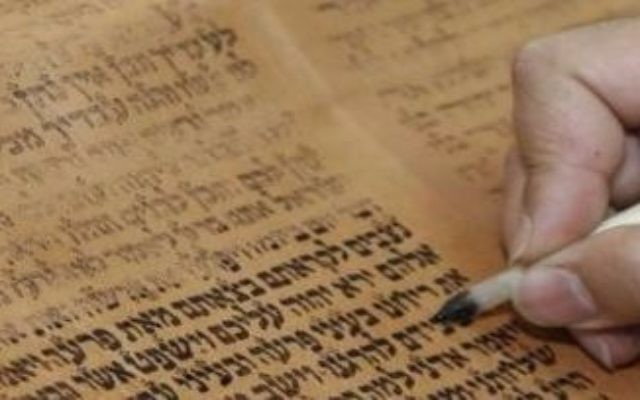 In loving memory of my mother, Judith Kaufman Hurwich a”h

“Language most shows a man: speak that I may see thee. It springs out of the most retired and inmost parts of us, and is the image of the parent of it, the mind. No glass renders a man’s form, or likeness, so true as his speech.”

Ben Jonson, Timber: or, Discoveries Made Upon Men and Matter

“Speak that I may see thee.” The notion of coupling speech and sight, both textually and conceptually, is the quintessence of Sefer Devarim (the Book of Deuteronomy), wherein the benefits of hindsight and foresight underpin Moses’ final testament to the Israelites. And nowhere is this more patent than in the narrative arc one might draw from last week’s Torah portion, Va’etkhanan (“And I besought”), to next week’s, Re’eh (“See”). Acts of speech and sight are employed to similar ends: repetition and reproof.

In Va’etkhanan (Deut. 3), Moses, the solitary man, recounts a poignant exchange with the God he has faithfully served for forty years. His plea flatly rejected, he appears, momentarily, a disabused outsider, segregated from his people. But, in the space of seven verses, the prophet and leader, mediator and lawgiver, is reconstituted, through language, in his repeated exhortations that the Israelites give heed, see, and take utmost care ─

By means of direct reference, allusion and linguistic parallelism, Moses’ discourse in Va’etkhanan repeatedly harks back to the Sin of the Calf in Exodus 32. More than a reminder and reproof to this and future generations of Israelites, it recalls his earlier supplication on their behalf.

“And Moses returned to the Lord and said, ‘Alas, this people is guilty of a great sin in making for themselves a god of gold. Now, if You will forgive their sin [well and good]; but, if not, blot me out of Your book, which you have written.’” (Ex. 32:31-32)

If, as Rashi suggests, Moses would rather be excised from the entire Torah than be deemed unworthy to beg mercy for the Israelites, this bold ultimatum – remarkable in and of itself – is a testament to the moral fiber of the man, who will not curry favor for personal gain. Citing the Zohar, R. Haim Sabato explains that Moses and the Israelites are inextricably bound. His essence is the essence of all. And his words, therefore, denote a kinship, which even God – through His eruptions of anger and His impulse to destroy – fails to acknowledge.

Whether Moses is God’s creation or an exemplar, delivered from the disjointed, mutable here and now to a transcendent, literary dimension of legend, his language – at times, self-conscious and tentative, at others, confrontational and restless – always endeavors to reconcile his devotion to God and the Israelites, particularly when they are at odds. In him, conflicting moods coexist, lending an air of sincerity and authenticity to his character and speech.

Our first glimpse of the man, who emerges from Pharaoh’s court in Exodus 2, reveals his predisposition to empathy and justice.

“Now it came to pass in those days that Moses grew up and went out to his brothers and saw their suffering, and he saw an Egyptian beating a Hebrew, one of his kinsmen.” (Ex. 2:11)

Moses sees and acts. He is the product of compassion and courage – of the women who saved and raised him.

“Speak that I may see thee,” Ben Jonson wrote, articulating the early modern notion that surface masks one’s true identity. It is but a threshold to an inner space, which mediates between the public and private, between depravity and virtue, between concealment and disclosure. And, in this respect, the Torah mirrors the many aspects of humankind ─

“Moses turned and went down from the mountain bearing the two tablets of the Pact, tablets inscribed on both their surfaces: they were inscribed on one side and on the other.” (Ex. 32:15)

The tablets, then, are a physical incarnation – a portable proof text – of God’s law, but the choice to obey is ours.

From admonitions imparted through the benefit of hindsight in Va’etkhanan, this exhortation to see, rather than hear, opens next week’s Torah portion, Re’eh, with a call for discernment. “See” is more than a stark choice between opposites, the Vilna Gaon explains. It is a perpetual, daily choice.

Jewish tradition envisions the universe as a written book. Long before the rise of literacy, the advent of print culture and the Age of Enlightenment, ours was a textual heritage, received and bequeathed through the ages.

As such, “blot me out of Your book” is a choice as well – a choice and a challenge to God’s sovereignty. An instance of the compassion and courage learned by a boy from the defiant women, who, though unnamed, exhibit uncharacteristic agency and a fullness of being. Women who saved the boy, destined to save a nation….

Ben Jonson, Epigrams, To the Reader