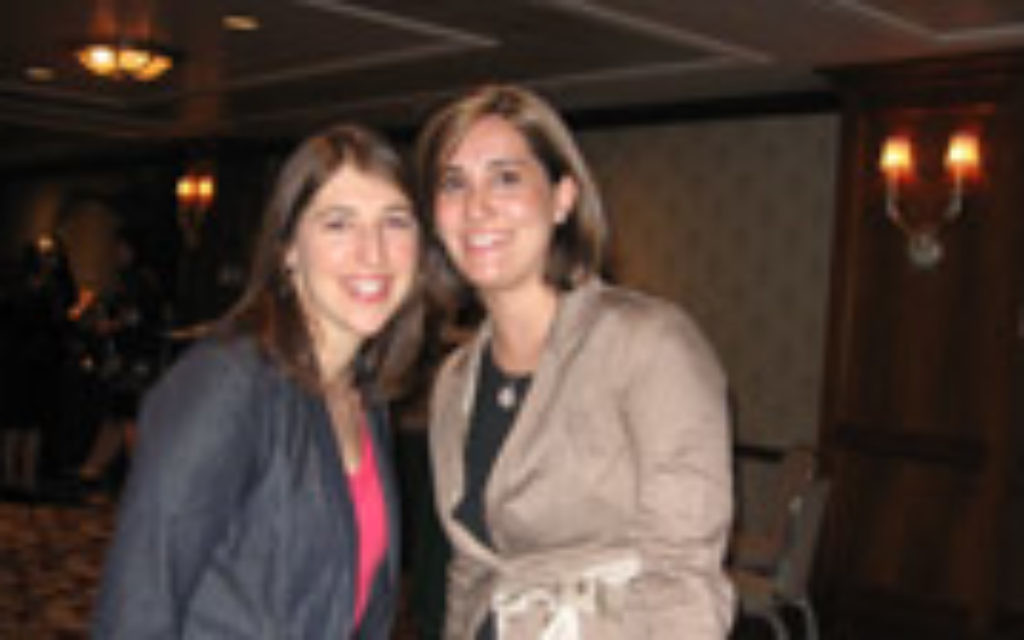 Josephs is referring to Mayim Bialik, the child star of the 1990s sitcom “Blossom” who has recently stepped back into the limelight in her role as Amy Farrah Fowler on “The Big Bang Theory.”

Over the past six years, the two women have become friends as well as study partners. Both are mothers of young children; both became observant in young adulthood. Together, they’ve parsed through the halachot involved in keeping Shabbat, studied the philosophical works of Rabbi Aryeh Kaplan and Rav Soloveitchik, and, these days, they learn the weekly Torah portion.

“She’s my go-to person,” Bialik says of Josephs. “When my grandparents died and I needed to plan a funeral, I turned to her and said, ‘What do I do now?’

We study life; as we study, things come up.”

Now, Bialik is capitalizing on her fame to help Josephs raise funds for “Jew In The City” (www.jewinthecity.com), a nonprofit that produces scripted YouTube videos that aim to break down negative stereotypes about Orthodox Judaism — and demonstrate that Orthodox Jews can be funny, approachable, educated, pro-women and open-minded.

“There is so much negative stuff out there,” Josephs says. “There needs to be someone saying, ‘I like being Jewish, I’m not repressed, I chose this life.’”

“Jew In The City” is largely a one-woman show. “There are very few women in kiruv (outreach),” says Josephs, whose husband is an attorney. “Every kiruv woman out there is connected to a kiruv man; this is the last frontier for women.”

The videos are “the more public version of what Allison has tried to do for me privately,” Bialik says. “She introduced me to the concept of traditional Judaism and let me decide what works for me; I don’t need to live life exactly the way she does.”

Bialik, who was raised Reform, said that she grew up with many misconceptions, such as the belief that her Orthodox cousins “thought they were better than us.”

On May 8, the actress will deliver a talk in Teaneck, N.J., in which she describes her journey from Hollywood star to observant Jew and how she maintains her religious beliefs and observance while on the set of “The Big Bang Theory.” She’ll also mingle with the crowd during a private hors d’oeuvres-and-wine reception held before the talk, which will be open only to sponsors of the event (those donating at least $180).

“What’s neat about this event is that I’m crafting a talk just for this about [Josephs] and our relationship, and how that has reflected on my life personally, professionally and religiously,” Bialik told The Jewish Week. “I can’t really talk about this stuff in Entertainment Weekly.”

This isn’t the first time Bialik has helped Josephs publicize the Jew In The City project. In the past, she has guest starred in one of Josephs’ videos. Her old character, Blossom Russo, asks, “Is it true? Are women really looked down upon in religious Judaism?”

“Obviously, she wants to capitalize as much as she can on things that bring attention [to Jew In The City],” Bialik says. “If I can help, I’m happy to.”

The two met six years ago through Partners In Torah, a nonprofit organization that pairs Jewish adults of all backgrounds with a mentor for free, over-the-phone Jewish learning. At the time, Josephs was working for the organization, doing intake interviews of college students, most of whom had just returned from Birthright Israel trips. Her job was to figure out what made them tick Jewishly and to match them with suitable learning partners.

When Bialik approached Partners In Torah seeking a study partner, Josephs was on vacation — which worked out well since the program doesn’t allow staff members to match themselves with people they’ve interviewed.

Thankfully, the only other person in the organization who knew who Bialik was answered the call.

“Anyone else in the organization would have been too old or too frum to recognize the name,” Josephs says. Josephs and Bialik were soon paired as study partners.

To say that Josephs was thrilled would be an understatement. “I grew up watching her, like every other girl my age,” she says. “I even had a Blossom hat.”

A while back, Josephs had tried to reach out to Bialik to arrange a study partner for her through Partners In Torah, but ran into a dead end. “If I am ever at the point in doubting my belief in God, I think back to this story,” Josephs says. “There has to be a God in the universe.”

At the time, Bialik was pursuing a doctorate in neuroscience, after completing an undergraduate degree in the same subject at University of California Los Angeles, where she also minored in Hebrew and Judaic studies. “I have a tremendous love for Jewish learning,” she says.

She has since become more observant. “I was the only person fasting on the set of ‘The Big Bang Theory’ on the Fast of Esther,” Bialik quips. She’s been public about her decision not to wear pants. “She’s back in the public eye with a new set of beliefs, and I’m really proud of her,” Josephs says.

A less public observance is Bialik’s adherence to the laws of family purity. “She’s really influenced a lot of women, who said, ‘If Mayim can go to the mikveh, I can too,’” Josephs says, referring to the reaction to Bialik’s speech at a fundraiser for the mikveh in Livingston, N.J. last year.

Recently, Bialik has “blossomed” on the Jewish circuit. In addition to blogging about parenting and her love of the Maccabeats on the new Jewish parenting site Kveller.com, Bialik addressed a packed crowd at The Jewish Federations of North America’s TribeFest in Las Vegas earlier this year.

“My Jewish identity exists alongside my religious observance, and not in place of it,” she told the audience, which responded with several bursts of applause.

“I wasn’t raised religious, and many people aren’t, and that’s still something you can build a foundation on,” she told The Jewish Week. “You’re not a bad Jew if you’re not ‘all the way.’ That was one of the misconceptions I had growing up — that your identity is your observance.”

The fundraiser in Teaneck will be more intimate than Bialik’s other speaking engagements. In addition to building buzz and raising funds for Jew In The City, Josephs hopes that Bialik will encourage Jews, affiliated and nonaffiliated alike, to deepen their connection to their faith. “She’s saying, ‘Give it a try, learn Torah regularly like I do,” Josephs says. “There’s a beautiful heritage right under your nose if you care to explore it. Mayim takes away the scariness and off-puttingness.”

“I definitely appreciate Mayim’s heksher on Jew In The City; it gets it out there more,” she says.

Bialik will be speaking in Teaneck, N.J. on Sunday, May 8 at 8:30 p.m. E-mail MayimInTeaneck@gmail.com for more information.