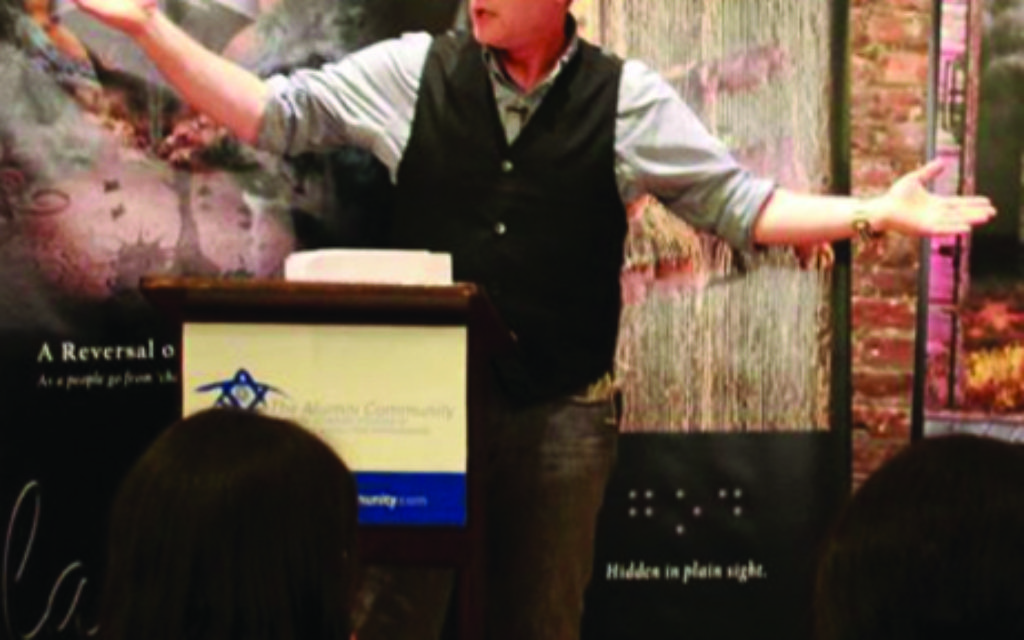 To honor the first yahrzeit of her mother last year, Karen Hochberg decided to bring a scholar-in-residence to the Young Israel of Jamaica Estates, where her husband, Rabbi Shlomo Hochberg, is spiritual leader.

Instead of a prominent speaker, Mrs. Hochberg chose Stan Lebovic, an artist who lives in Baltimore.

Through her work as director of community programming for the New York-based Afikim Foundation, she had learned about Lebovic and about “Black is a Color,” his self-published book of artwork and philosophical essays about God and the Holocaust that appeared in 2011. His gripping drawings, which use Holocaust imagery in unanticipated-and-possibly-upsetting contexts, and his writings, which discuss a benevolent God who allows evil to flourish, were a natural for the shul event in her mother’s memory, Mrs. Hochberg thought.

Over Shabbat, Lebovic (blackisacolor.com) exhibited nearly two dozen of his works. And he explained the philosophy behind them.

His art (such as musical notes in place of barbed wire on a concentration camp fence, or Sukkot etrogim stamped with death camp tattoos) and his words (“When the pain of experience exhausts our words, we must turn to symbols.”) were the first part of an outreach effort Lebovic launched to bring his unique theological perspective on the Shoah to a wider public.

While embarked on current, nationwide campus tour, he is developing a Holocaust mini-semester for high schools and a curriculum for universities’ Judaic Studies departments, based on his art. He is also working on a student handbook, and is completing a Passover Haggadah.

Lebovic will introduce his project to the Greater New York area at Book Day of the Torah Academy of Bergen County, 1600 Queen Ann Road in Teaneck, on Thursday, April 18 at 1:30 p.m.

Common to all Lebovic’s activities is his belief as the child of a Holocaust survivor that a just God allows evil to flourish, and that people cannot explain the dissonance. “Faith is not solving the equation, for the equation has no solution,”Lebovic says. “Rather it is living with the equation. In my art and in my writing I strive to represent a portrait of reality where God exists in the light and in the dark.”

Hence the title of his book. “The black we acknowledge and don’t shy away from will add depth and contrast to all the colors with which we paint our realities.”

Lebovic says his work is in the spirit of Art Spiegelman’s Pulitzer Prize-winning “Maus,” which depicted his Holocaust survivor father’s story in the form of a graphic novel. The primary audience for both is the generations born after the Shoah, the children and grandchildren and great-grandchildren of survivors.

After his speeches at schools, Lebovic says, students often approach him and thank him for showing how one can balance faith and doubt.

Lebovic made a good impression during his scholar-in-residence gig in Jamaica Estates, Karen Hochberg says. Many members of the Young Israel are Holocaust survivors or their children.

Lebovic’s description of his own existential struggles – “He doesn’t give answers.” – provided many congregants “a different understanding of evil and suffering,” Hochberg says. “He was able to verbalize what a lot of people [attempt to do] themselves.”

That Saturday night, members of the congregation bought 40 copies of “Black is a Color.” That’s a high number for a speaker at the shul, Hochberg says. “Usually we sell three or four books.”