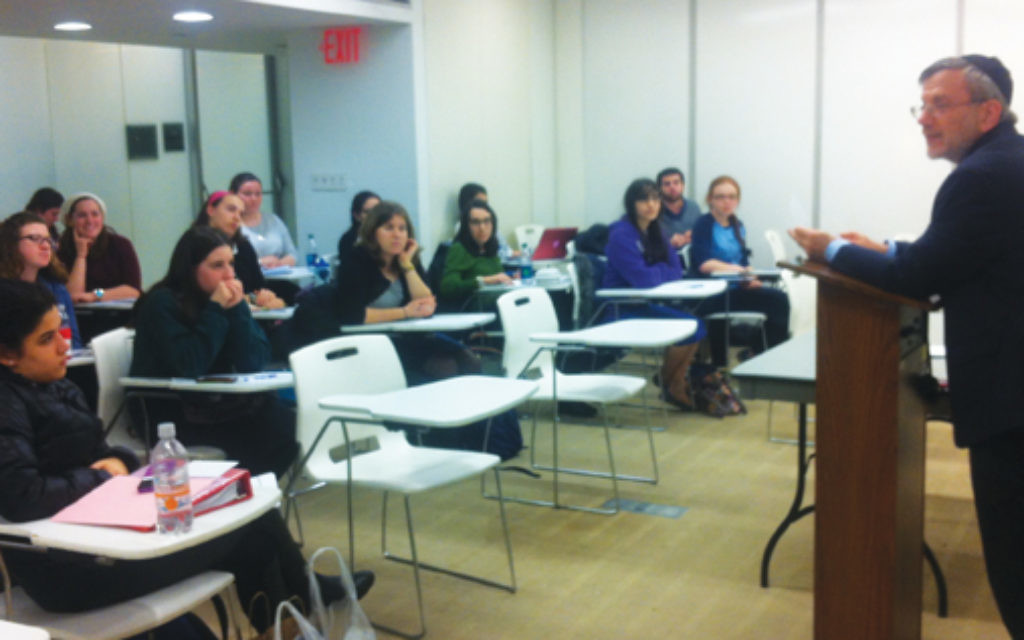 For the Stern College women gathered for a lecture on birth control and Jewish law last week, it wasn’t an easy pill to swallow.

Even in this Modern Orthodox setting in Midtown Manhattan, far from the charedi precincts of Borough Park and Williamsburg, Rabbi Moshe Kahn’s position raised questions.

“No rabbi can know a couple well enough to make this decision,” said the rabbi, a longtime Talmud teacher at Stern, referring to the common practice among Orthodox couples of visiting a rabbi before marriage to get a yea or nay on whether to use birth control.

The custom, he told the nearly three dozen women and sprinkling of men, is infantilizing, unfounded and psychologically damaging. The “fallout” of such rabbinical intervention, he added, could lead to “unwanted children” and “unhappy marriages.”

After his talk, the first public presentation at Stern on birth control and Jewish law since 2006, Rabbi Kahn was peppered with questions, albeit ones written on index cards: “What if the couple has fertility issues?” and “When is too long to wait?”

And then, the “f” word appeared: “Were feminist ideologies influencing his views?”

The questions underscore how delicate the issue of sexual and reproductive choice is — even in the relatively progressive (by Orthodox standards) environs of Stern College for Women. And it comes as more and more Modern Orthodox women seem to be delaying childbirth, trying to negotiate the twin pressures of Jewish tradition and the feminist ideal of personal choice.

“The idea that sex is not just for procreation is inherently a feminist idea,” said senior Sarah Robinson, 22, a co-organizer of the event. She called Rabbi Kahn’s claim that feminism and birth control are unrelated “ironic,” given that female empowerment underlies the entire concept of birth control.

“You can’t really separate between the two,” she said.

But for some, perhaps many Stern women, the point about feminism seems moot. “Choosing not to take the pill is what’s weird,” said another attendee, 20, who wished to remain anonymous due to the private nature of the subject. When one of her friends got pregnant at the age of 20 shortly after getting married, “people were pretty shocked,” she said. “There’s an assumption that people are going to take the pill. I think it’s comforting that you can get married without being ready to have kids right away.”

The 2013 Pew Research Center’s survey on American Jews added a sense of urgency to the birth control conversation. The study found that Jewish adults ages 40-59 report having had an average of 1.9 children, compared with an average of 2.2 children per adult in the same cohort of the general public. Though the Orthodox birthrate remains high at 4.1, overall numbers for Jews fall short even of the replacement rate.

Among Orthodox Jews, birth control is a line in the sand, of sorts, dividing different Orthodox camps. In chasidic and black-hat circles, birth control is more rarely used, and, when it is, must be authorized by a rabbi. On the more liberal end of the Orthodox spectrum, couples use birth control more often, but it is still traditional to ask a rabbi for a heter, or permission, for a host of reasons, ranging from emotional to financial.

“We asked a rabbi if we could use birth control for our first year of marriage because my husband and I were both still in school,” said Ilana W., 22, a Modern Orthodox woman on the conservative side of the continuum who got married last year. The rabbi replied that it wasn’t permissible. “He told us that unless we have severe mental health problems, we have no good reason to push off pregnancy,” she said. “You’re not supposed to delay fulfilling a mitzvah,” she said, referring to the biblical commandment to have children. “Even if you have a convincing case, most rabbis won’t give you a heter,” she said.

But for Modern Orthodox women further on the left, birth control can represent a badge of pride and autonomy.

“Encouraging women to take control of their bodies is so important,” said Avital, who wants to become a yoetzet halacha, a female expert in Jewish law.

In a blog post two years ago entitled “Feminist, Orthodox, Engaged and on the Pill,” Simi Lampert, the Stern graduate who made headlines after refusing to take down an article in a Yeshiva University publication explicitly discussing sex, described feeling “liberated” after taking the pill.

“There’s something psychologically powerful about being on birth control. I suppose it’s about claiming my body as my own. … I’m in control of my cycle, something which for centuries for women — and a decade for me — wasn’t a possibility,” she wrote.

Rabbi Kahn published a heavily researched article on the subject of birth control and Jewish law in 2010. The article was written primarily in response to Rabbi Hershel Schachter, rosh yeshiva at Yeshiva University, who published an article in the 1980s discouraging the use of the birth control pill. It was turned down by two mainstream Orthodox publications. Instead, Yeshivat Chovevei Torah, an institution known for a more liberal brand of Orthodoxy, published the article.

“They were afraid my article would limit the role of rabbanim [rabbis],” said Rabbi Kahn, explaining the two publications’ decision to reject the article.

“Oh, my god, he said that in public? Good for him!” she said, referring to Rabbi Kahn’s defense of birth control and personal autonomy.

Marcus, who works with women across the religious spectrum, said that most Modern Orthodox women use birth control, and her “gut” feeling is that most don’t ask a rabbi.

“We want a world where children are wanted. If a couple’s not making the decision about birth control, that’s no guarantee,” she said.

Marcus laughed off the concern, raised by other Stern students, that the use of birth control might limit family size.

“Most Modern Orthodox couples are going to aim for three or four kids, whether they start at 22 or 29,” she said.

Dr. Michelle Friedman, a psychiatrist specializing in women’s mental health, said that she doesn’t believe Modern Orthodox women’s embrace of birth control is anything new. A study Friedman co-published in 2009 on observant married Jewish women and their sexual lives found that although 90 percent of women reported using birth control, only half of the women surveyed consulted a rabbi about the decision.

“What’s new is not that women are using birth control, but that a new generation of women need to hear about it,” she said. “There’s a new crop of observant, college-aged women who care and want to know more.”

Friedman’s data also suggested that Jewish women do not bring questions about their sexual lives to the scrutiny of their rabbi with the same frequency as other, equally serious matters.

Stern’s Sarah Robinson, who co-organized Rabbi Kahn’s appearance, said she assumes most students at Stern are uninformed about the biology of birth control or its place in Jewish law. Though there is “some discussion in the classroom” about the subject — she mentioned a human sexuality course offered in the psychology department — conversations aren’t accessible to all students. Her priority in organizing the event was to “open up the conversation.”

Jennifer A., 19, a Stern freshman, chose to attend the event because it sounded interesting. Most of her friends are not yet dating and not one of them is married. Still, she was happy to hear a rabbi so openly discuss the psychological damage that could be caused by the premature decision to have children.

“I’m happy I came, and I’m glad they had this event. But I’m not getting married anytime soon,” she said. She paused. “I hope my mom doesn’t read that.”