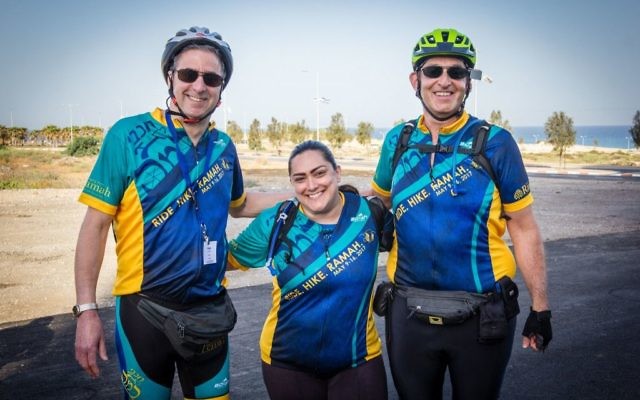 From Wednesday through Friday during the second week of May, bike riders and hikers on the fourth biennial Ramah Israel Bike Ride and Hiking Trip pedaled and hiked through the 108 degree Western Negev sun and the Judean Hills. These riders and hikers from the United States, Canada, and Israel represented the Ramah Camping Movement’s nine overnight camps and five day camps, and were on their way to raising nearly $470,000 for the National Ramah Tikvah Network of programs for campers with intellectual and developmental disabilities. Participants got to know each other as they ascended hills and descended through valleys, shared snacks and meals, and lounged by the pool after a strenuous day.

Something very special happened Shabbat evening that changed the ride and hike experience for everyone. Following Kabbalat Shabbat services overlooking Southern Jerusalem and a sumptuous Shabbat dinner, riders and hikers attended an evening program to learn more about Tikvah, founded in 1970 and now part of all Ramah camps. As director of the National Ramah Tikvah Network, I provided an overview of our programs and shared stories of my 21 years with Tikvah. Ralph Schwartz and Orlee Krass, fellow bike riders and Ramah Tikvah directors, recounted stories of their Tikvah programs at Ramah Wisconsin and Ramah Poconos. Then, four very special people changed the evening—and the entire trip—for everyone.

One by one, Mark, Ben, Jeff, and Ethan shared heartfelt stories of their children’s participation in Tikvah.

“Adam and Eric both got to go to Israel with Ramah on a Tikvah trip. Eric came back and told the story of visiting an Israeli army base where people with disabilities [through the Special in Uniform Program] serve in the IDF. He was amazed and impressed that people like him get to serve in the Israeli army.”

“We are happy that Jacob got to attend camp for so many years—just like his older and younger brothers. Camp is something all of our children share.”

“Sam has friends he met at camp, and he gets together with two of them regularly during the year.”

“We have two sons in Tikvah. Our younger son, Jacob, is mostly non-verbal. We were excited that, when he became bar mitzvah, we would have three adults for a mizuman [the introductory part of Birkat Hamazon, the grace after meals]. During a Friday night dinner right after camp, when we started singing the first paragraph, Jacob blurted out, ‘Rabotai Nivarech.’ We were so touched and amazed. We asked if he learned it at camp and he said no—he was just surrounded by benching (grace after meals) every meal!”

Up until this informal Shabbat gathering, Mark, Ben, Jeff, and Ethan were just fellow riders, having a good time in a special place as they raised money for a good cause. Now, the ride and hike had new meaning for everyone. As one of our special funders, Jay Ruderman of the Ruderman Family Foundation, often notes, “We are all connected to disability. You can’t sit at a table at a simcha where someone is not closely connected to someone with a disability. And we will all know someone with a disability.”

As the riders and hikers got back on their bikes and put on their hiking shoes for two more days of hot, strenuous riding and hiking in and around Jerusalem, Arad, the Dead Sea, and Masada, we can all proudly say that we are connected to disability. We are so proud that the money raised will help families of children with disabilities benefit from an amazing summer in a Jewish summer camp!

Howard Blas was the director of the Tikvah Program at Camp Ramah in New England and is now director of the National Ramah Tikvah Network. Howard also serves as a teacher of Jewish studies and bar/bat mitzvah preparation to students with a range of disabilities and “special circumstances.” He holds masters’ degrees in both social work (Columbia University) and special education (Bank Street College of Education). Howard received the S’fatai Tiftakh Award from Boston Hebrew College’s Center for Jewish Special Education in 2012 and the 2013 Covenant Award for Excellence in Jewish Education. He writes regularly for many Jewish publications.