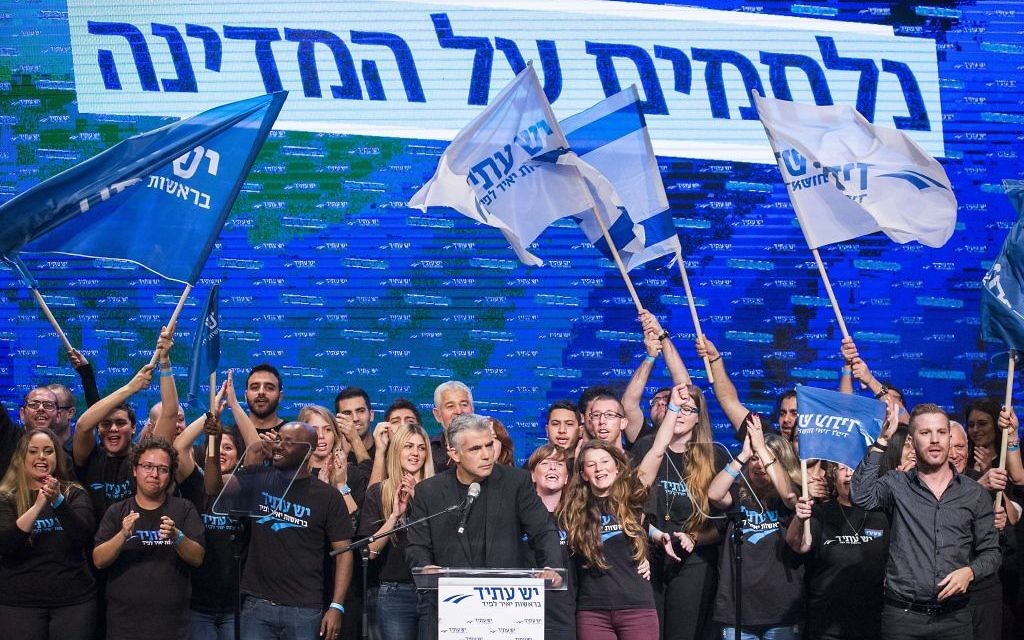 Tel Aviv — The twenty-something volunteer soliciting café goers on a Tel Aviv street introduces herself as Ilanit and wears a T-shirt that says “Just Switch” in Hebrew.

She explains that people should make sure to vote for a new government because Israel needs to change. No, she says, her nonprofit isn’t an initiative of the opposition Labor Party. It’s a grassroots group that wants to send Prime Minister Benjamin Netanyahu packing. Ilanit takes some details from a few people, writes them down and moves on.

Netanyahu’s lawyer David Shimron called it “criminal activity aimed at buying the election through money.” One Power Point slide showed a terrorist in a keffiyeh flashing a “V” sign with the number 15 alongside it. QUESTION INTO JOSH ON THIS.

V15 representatives have rejected the criticism as Netanyahu spin and smear tactics. They argue that the organization is an initiative of a politically minded group of Israeli young media professionals that wants to do grassroots work to support the parliamentary system.

It all started, explained Nimrod Dweck, a V15 founder, with the Facebook post of a friend who once organized for the Israeli chapter of the environmental group Greenpeace. “He said, ‘Let’s do something cool in the elections. Let’s do some [statistical] analysis of some cities, and then mobilize some voters for the center and the left [parties],” he said.

Dweck said that V15 got help from Yuval Diskin, a former Shin Bet chief, and that Lubetsky’s pro-peace nonprofit One Voice offered legal advice and helped build the social network group into a proper campaign organization. One Voice helped to link V15 to 270 Strategies, a U.S. strategic consultancy run by Barack Obama get-out-the-vote alum Jeremy Bird, which was able to successfully use data analysis to boost turnout through field organizing.

U.S. Republican allies of Likud seized on the link to allege that President Obama is intervening in Israel’s election against the prime minister, and also attacked One Voice. Labor’s chairman, Isaac Herzog, who heads the opposition “Zionist Camp” parliament list, denied a link between the campaign and V15.

The allegations against V15 come as multiple corruption scandals swirled around Prime Minister Netanyahu. Late Monday, Israel’s State Comptroller’s office announced that it forwarded to the state’s attorney the results of an inquiry into the expenditures at the prime minister’s residence; the inquiry alleged the pocketing of recycling proceeds by his wife Sara, and raised the question of possible criminal activity.

Israel’s media also alleged that Netanyahu sought to have publication of the inquiries delayed until after the election, and that his office tried to bury a state comptroller report about Netanyahu’s acceptance of outside funding to pay for trips abroad for his family when he was finance minister.

The V15 attacks “are a diversionary tactic of Netanyahu because he’s grappling with comptroller reports on his personal dealings,” said Mitchell Barak, an Israeli-American pollster. “It rallies his supporters around the fact that the [left-leaning] media is out to get him, and he makes it look like Obama is behind this.”

Soon after the attacks on V15, the Israeli press reported that Likud had hired Vincent Harris, a Republican new media strategist who has worked with Sen. Rand Paul. Bloomberg News describes Harris as the inventor of the “Republican Internet.” Harris, who is currently in Israel, confirmed the reports, but declined to comment further.

Eyal Arad, an Israeli campaign strategist, said the Likud focus on V15 “is a risky campaign tactic because it’s focused on process and not a real issue. And Likud also uses American advisers.”

That said, Likud’s polling numbers appear to have been rising in recent weeks. A poll by the Haaretz newspaper gave the ruling party a two-seat advantage over the opposition Labor Party, 25 seats to 23. According to a compilation of recent polls by Project 61, an Israeli survey data cruncher, right-wing parties are projected to get 41 seats, while left-wing parties would get 29 seats and centrist parties 21 seats.

The V15 headquarters are on the second floor of a building in a Tel Aviv commercial district that is home to technology start-ups and financial companies. Amid posters showing Netanyahu’s face whited out with the words “Just Switch,” the cramped office space buzzed this week with youthful energy.

Dweck declined to give a tour of the data operation for fear of divulging campaign secrets. He did say that the organization has signed up 7,000 volunteers to do grassroots recruitment like knocking on doors and arranging parlor meetings.

The V15 team also includes a team of 40 statistical analysts that has volunteered to crunch demographic figures cross-referenced by neighborhood voting patterns. Dweck says the analysis has given the organization a street-level profile of where they should be focusing their efforts.

Contrary to the conventional wisdom about reaching out to potential swing voters or areas that are Likud strongholds, the strategy of V15 is to focus raising voter turnout in the centrist liberal strongholds. As a result, the organization is focusing on some 15 central Israeli cities, and their suburban areas, with a total population of about 1.5 million people.

“I’m a true believer of strengthening the periphery and that the country is too focused in the center. But politically you have to work in the center of Israel,” Dweck said.

With less than two months to go before the March 17 election, “There’s no sense of an election going on — you don’t see signs in the streets,” said Arad. “An action like V15 can energize the base, because it can create a bandwagon effect.”

Dweck said that the goal of the campaign is to raise voter turnout in those strongholds by 3 to 5 percent. That could shift two seats in the Israeli parliament from the right-wing bloc to the center-left bloc, potentially tipping the balance between the parties.

Israel’s campaign has relied heavily on messaging through social media so far, but that could be a mistake, said Barak, the Israeli American pollster.

“Parties have gotten lazy,” said Barak. “They think that fighting their campaigns in YouTube or Facebook is going to get them votes.

V15 brought in Jeremy Bird and 270 Strategies to add professionalism and know-how. They helped streamline the campaign by training field volunteers and calculating the number of hours needed for the outreach.

Israel has thin experience with American-style outreach campaign, said Dweck and other analysts. Though the country has relied on U.S. advisers for strategic messaging, political parties lack the experience in organizing a professional ground game and have usually relied on street-corner activists and salaried party operatives at local branches.

“You don’t need to do big media campaign; you don’t need to buy a lot of adds,” he said. “All you have to do is go door-to-door, and ask people who are you going to support.”