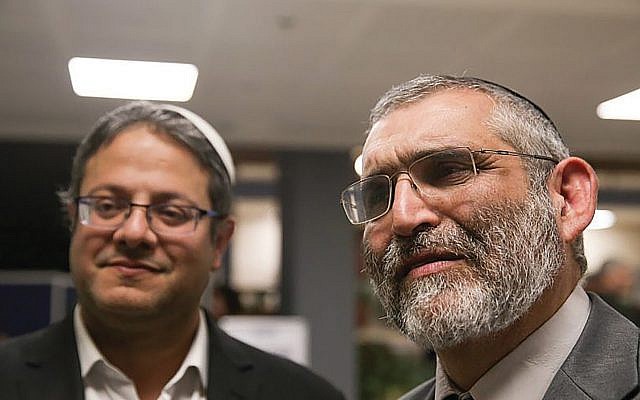 At first blush, the deal may have seemed like a tactical maneuver aimed at shoring up Israel’s right-wing religious constituency ahead of Israel’s April 9 parliamentary election.

The pro-settler Jewish Home party and the National Union party agreed last Thursday to run jointly with a small far-right party dubbed Jewish Power, in order to make sure that votes don’t get lost in case the parties failed to pass the minimum threshold for representation in the Knesset.

But this was no ordinary political agreement and Jewish Power is not an ordinary political party. It is led by disciples of Rabbi Meir Kahane — whose Kach party was deemed too racist to stand for elections in 1988 and was outlawed as a terrorist group in the 1990s — and Prime Minister Benjamin Netanyahu actively pushed the sides into a deal to help his own reelection prospects.

The deal has triggered a political uproar in Israel, become a talking point in the parliamentary campaign and touched off a debate within Israel’s Modern Orthodox National Religious movement over its ideological red lines. Most notably, the move led to unprecedented open criticism by American Jewish groups like AIPAC, the powerful pro-Israel lobby, and the American Jewish Committee.

“We don’t make a practice of intervening [in Israeli politics],” but we felt that we couldn’t be quiet,” Avital Leibovich, the director of the AJC’s Israel office, told Israel’s Army Radio. “When there is a fear that a party based on racist values will enter the government, and will take part in molding the values of the State of Israel — we are horrified.”

Leibovich continued, “[American Jewry] is an important voice. We are talking about a deepening crisis between diaspora Jewry and Israel that didn’t start with our statement, but a long time ago.”

Rabbi Kahane, a Brooklyn native who led marches for Soviet Jewry and promoted Jewish self-defense, moved to Israel in the early 1970s. He called for the expulsion of Arabs from “the land of Israel.” Likud members walked out of the Knesset plenum when he was elected to the parliament in 1984. One follower of Kach, Baruch Goldstein, infamously massacred dozens of Palestinian worshippers at the Tomb of the Patriarchs in 1994, leading to the outlawing of the group.

Among the top politicians of Jewish Power — “Otzma Yehudit” — are Itamar Ben Gvir, who has displayed a portrait of Goldstein in his home, and Bentzi Gopstein, who runs Levahva, a vigilante group that targets Palestinian youths in Jerusalem and intermarried couples. A third, Michael Ben Ari, has previously been elected to parliament.

“The prime minister is making the unbelievable views of racists kosher. This is a moral stain on all of us,” said Yedidia Stern, a law professor at Bar Ilan University and a vice president of the Israel Democracy Institute. “Jewish people after the Shoah should be the last people to allow hint of racism. This is very unfortunate.”

The criticism spanned from the Anti-Defamation League to neoconservative Bloomberg columnist Eli Lake, who wrote that Netanyahu and his coalition “deserve to lose power” for legitimizing “hateful fanatics,” to Conference of President’s Executive Vice President Malcolm Hoenlein, who told the Associated Press that American Jews were concerned and that “politics can’t dictate everything.”

The rift between Israel’s right-wing government and the liberal-leaning American Jewish public has been festering in recent years over egalitarian prayer at the Western Wall, a bill that demotes the status of Israel’s Arab citizens and the country’s handling of tens of thousands of African refugees.

The recent reactions reflect shock and offended sensibilities among broad swaths of American Jewish leadership over the Kahanists and the need to condemn bigotry, said one former U.S. diplomat. The statements were all the more notable because they came in the middle of an election campaign.

“The instinct is always to rally around the flag. And when conflicted — especially in the midst of an election — to maintain a quietist posture, not to stick your nose into ‘internal Israeli affairs,’” said Scott Lasensky, a former senior adviser to the U.S. ambassador to Israel during the Obama administration. “So this open, vocal criticism we’ve seen in recent days is all the more notable.”

However, the criticism from U.S. Jewry wasn’t wall to wall. The National Council of Young Israel, an association of Orthodox synagogues, issued a statement of support for Netanyahu, saying “we understand what Prime Minister Netanyahu did.” The right-wing Zionist Organization of America also stepped up to the Israeli leader’s defense.

Following the condemnations from abroad and at home, Netanyahu pushed back by drawing a moral equivalency that accused Israeli left-wing parties of cultivating alliances with Israeli-Arab politicians who worked to undermine the country.

“Such hypocrisy and double standards from the left,” Netanyahu wrote on Twitter. “A unification of right-wing parties is unacceptable, but acting to get inciters and spies into the Knesset is legitimate. The height of absurdity.”

The move immediately became a line of attack for the newly formed Blue and White party, a merger between former army chief of staff Benny Gantz and Yair Lapid’s centrist Yesh Atid. Boasting three ex-army chiefs, but lacking ideological cohesion, the party is polling ahead of Likud in election surveys. Analysts say it could pose the most formidable challenge to Netanyahu in 15 years.

Yoaz Hendel, a Blue and White candidate for parliament who was a former aide to Netanyahu, said on Twitter that “a Zionist leader isn’t supposed to make an effort to bring the Kahanist movement into the Knesset. No lie about a [parliamentary] bloc with the Arab parties will erase the disgrace of those who lent Kahane a hand.”

Moshe Ya’alon, an ex-defense minister from Likud under Netanyahu, tweeted, “I was embarrassed by the efforts of Netanyahu to put Kahanists in the Israeli Knesset. Netanyahu is ready to sell Jewish values for his own political survival.”

Opposition politicians are petitioning the Supreme Court to block Jewish Power from participating in the election.

The move has also sown a rift among Israel’s national religious community, with many criticizing the move.

Rabbi Benny Lau, a fellow at the Shalom Hartman Institute and a son of former Chief Rabbi Meir Lau, kicked up a controversy when in a Shabbat sermon he likened the Kahane ideology to the racist ideology of Nazi Germany.

“The fact that the Kach movement presents itself as a legitimate authority on biblical traditions wherein they cite brutal battles and wars against historical enemies of the Jewish people as validation for modern-day racism,” wrote Rabbi Yuval Cherlow in a text message.

“We also pride ourselves on the ethos of publicly sanctifying God’s name, to live al kiddush Hashem, an ideal that leads many people of all levels of observance to repel many of the concepts espoused by the Kach movement. Through that perspective, the beliefs of the proponents of the movement can be viewed as wholly out of line with Jewish values.”

Eliaz Cohen, a resident of the settlement of Kfar Etzion and a coexistence activist, was more blunt, calling the organizations led by Kahane’s disciples “the KKK of Israel.”

“My concern is about morality. Since Rabbi Kahane started, this movement has always been beyond the pale,” he said. “Even the most ideological extremists of the right and [the messianic, right-wing movement] Gush Emunim knew how to mark the borders, that they are outside the community and our synagogues. Now, they are giving legitimacy to this racist movement. Calling it a desecration of God is an understatement.”