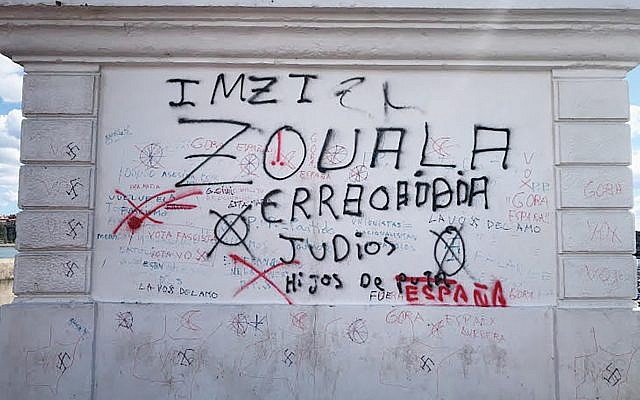 I picked a non-traditional study-abroad program — one based in the Basque Region of Spain, known for its recent terrorism and secessionist motives. As part of the School for International Training’s inaugural “Spain: Policy, Law and Regional Autonomy in Europe” program, I have been living in a homestay and studying at a Jesuit university. Coming to Bilbao, a city with no historical Jewish presence and the closest temple located 250 miles away, my sense of culture shock was of no surprise. I needed a break from living in the beating heart of politics — Washington, D.C. Finally, I naively thought, I can learn about Europe, not the Middle East, and debate Brexit, not Israeli politics. In a way, abroad was my escape. In reality, it has been everything but.

Everyone asked why I didn’t study abroad in Israel — a natural assumption. I convinced myself that it was too easy of an option. I wanted to be pushed, exposed to new studies, and exploring new cultures. As a pro-Israel advocate in D.C., I thought Spain would be a refreshing smaller-scale challenge as a Zionist Jew. In many ways, this challenge has been, again, the same, but different.

I didn’t feel a need to take a picture of the first couple of swastikas I found around the city. Everyone has seen them … those scrawling them are on the fringe, and we are in the 21st century; it’s just graffiti after all.

Spain was not the first place I’ve been told I am the first Jew people have met. Most have usually been pleasantly surprised to learn that I’m Jewish, in D.C. and Bilbao alike. Their initial reactions are always fun, because I can see the stereotypes running through their heads, and their consideration of what is an appropriate reaction. My favorite said so far, in Spanish, has been, “Oh cool! My family loves Adam Levine.” While laughing and agreeing Maroon 5 is a great band, I thought, wow, that wasn’t so bad. 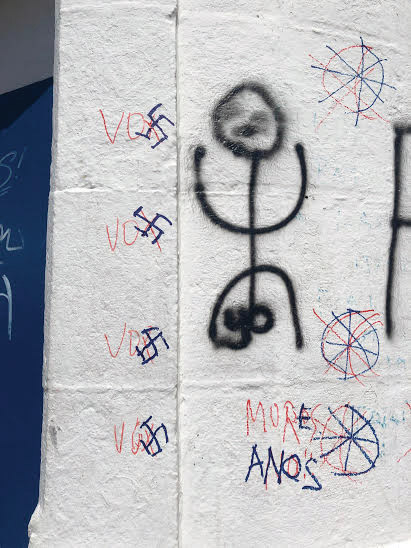 Vox, a new far-right political party in Spain, has been rising in the polls. Graffiti signs I’ve seen often substitute a swastika for the letter X in the party’s name. In Bilbao, Vox is far from topping the polls, but it recently received slightly over 10 percent of the vote in Spanish parliamentary elections. As concerning as any far-right party is, in the context of Spain, I didn’t assume Vox’s embrace of the far-right narrative would imply an instinctive embrace of anti-Semitism. This put to test my Jewish high school’s teaching that anti-Semitism, as all forms of racism, is characterized by baseless hatred. I didn’t want to believe that there could be hatred towards a people they’ve never met. I have been forced to recognize such a reality since.

“I tried to find more information online connecting pro-Vox demonstrations with swastikas or even discussing their anti-Semitic ideology, but found little,” explained Hannah Kaplan, the only other Jewish student on my program and current undergraduate at Rice University. Several modern, democratic, well-developed European countries have not batted an eye to the growing number of swastikas on their streets, hate crimes happening on their corners and fear-mongering published in their newspapers. Like Hannah, I expected hate in the streets, but feared hate in the classrooms. Unfortunately, as she said, “the media in Spain is not highlighting any of these anti-Semitic incidents, and the professors I have encountered here seem to reflect this nonchalance.”

The esteemed professors at Deusto University repeatedly neglected to mention that Jews, like Muslims, were expelled from Spain during the late-15th-century Inquisition. Hunter Kolon, a non-Jewish Southern Methodist University student on my program, also picked up on this telling historical inaccuracy. “Their flippant remarks that although anti-Semitism is rising in Europe, it is not a big political concern,” as she phrased it, is an unforgivable reality. Anti-Semitism is only a problem if you make it a problem, and no one is making enough noise to make it a problem when it so distinctly is.

On a run a few weeks ago, I came across graffiti on a wall that read: “Jews are mother*CKers” and “You should be angry with Jews” written in Euskera (the regional language).

To better understand the Scottish independence movement and the ever-worrying Brexit deal, my program organized a visit to a leading university in Glasgow, where we had a lecture and met the vice president of the student body. A black female born in Austria, we applauded her leadership as a minority.

While describing her campus activism, I patiently waited for my cue to hit the golden buzzer, see sparkly confetti and hear roaring applause surround her podium as she said the magic word: BDS. To my surprise, I held back the drum roll. She didn’t even mouth the word that has haunted so many college students in the United States. Frankly, I was mad at myself for sweating through my shirt. My anxiety was silly and I was paranoid, I thought. Yet again, I was wrong. As she gave us a tour of the campus, I noticed the single pin on her backpack. “Stop arming Israel,” it read. I laughed. She chose not to oppose the arming of the Syrian or Yemen civil wars, China’s Islamophobic treatment of the Uyghur people, Hamas’ oppressive rule in Gaza, Turkey’s jailing of journalists, Russia’s cybercrimes, not to mention Britain’s Labour Party’s growing anti-Semitism. But, of course, she focused on the disarmament of Israel’s defense forces. Take their weapons and force their collapse! Why? Well, I stopped myself before wasting time on such a speculation.

I’ve realized this is the problem we progressive supporters of Israel share: We try time and time again to justify criticism of Israel. We find plenty of reasons to justify the actions of people that cannot find a single reason for Israel’s existence. Turning a blind eye to the swastikas on the corners of Bilbao, the pins in Scotland and the anti-normalization campaigns in the U.S. Anti-Semitism is growing in Spain and Europe at large. I am seeing it with my own eyes through street graffiti and political rhetoric. If Americans feel so inclined, they can rightfully criticize Israeli politics. But if we don’t take it upon ourselves to protect our only home and refuge, then I think we are doing a disservice to future generations. It’s not blind or unconditional support. It’s conscious support for our haven.

Tali Edid is a rising senior at George Washington University.