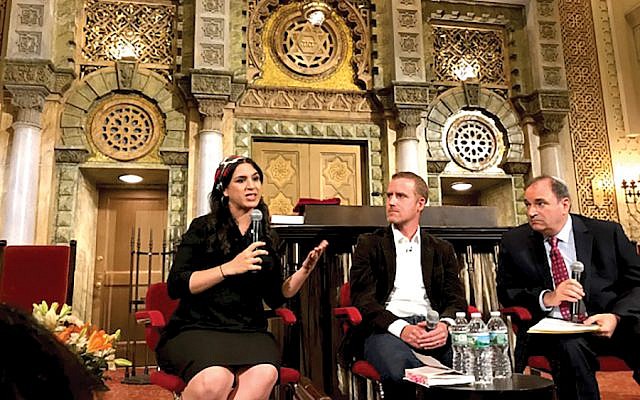 Matti Friedman, the award-winning Israeli journalist and author, says he chose to write his latest book about a small group of Arabic-speaking Jewish spies in pre-1948 Israel for two reasons. It makes for “a great yarn,” he told an audience of more than 400 people at a May 6 forum sponsored by The Jewish Week in partnership with UJA-Federation of New York, Natan and the host Park Avenue Synagogue. On a deeper level, the book highlights the too-often underplayed role of Mizrahim — Jews from Arab and Islamic countries — in the heroic founding of the Jewish state.

Friedman was in conversation with Mijal Bitton, fellow-in-residence at the Shalom Hartman Institute and rosh kehilla of the Downtown Minyan. Their insightful discussion stayed with me long after it was over, reminding me that the community, including this newspaper, should be more attentive to reflecting the fact that not all American Jews are Ashkenazi.

In their conversation, moderated by Rabbi Charles Savenor of Park Avenue Synagogue, both Bitton and Friedman noted that although Mizrahim now make up the majority of Israel’s Jewish population, the state’s Zionist historical narrative is still told primarily through an Ashkenazi lens, from founding father Theodor Herzl, a native of Vienna, to the waves of immigration from Russia and Eastern Europe in the early 20th century to survivors of Nazi Europe just prior to statehood. Only secondary attention is given to the hundreds of thousands who fled discrimination and persecution in the Arab and Islamic world soon after Israel became a state. 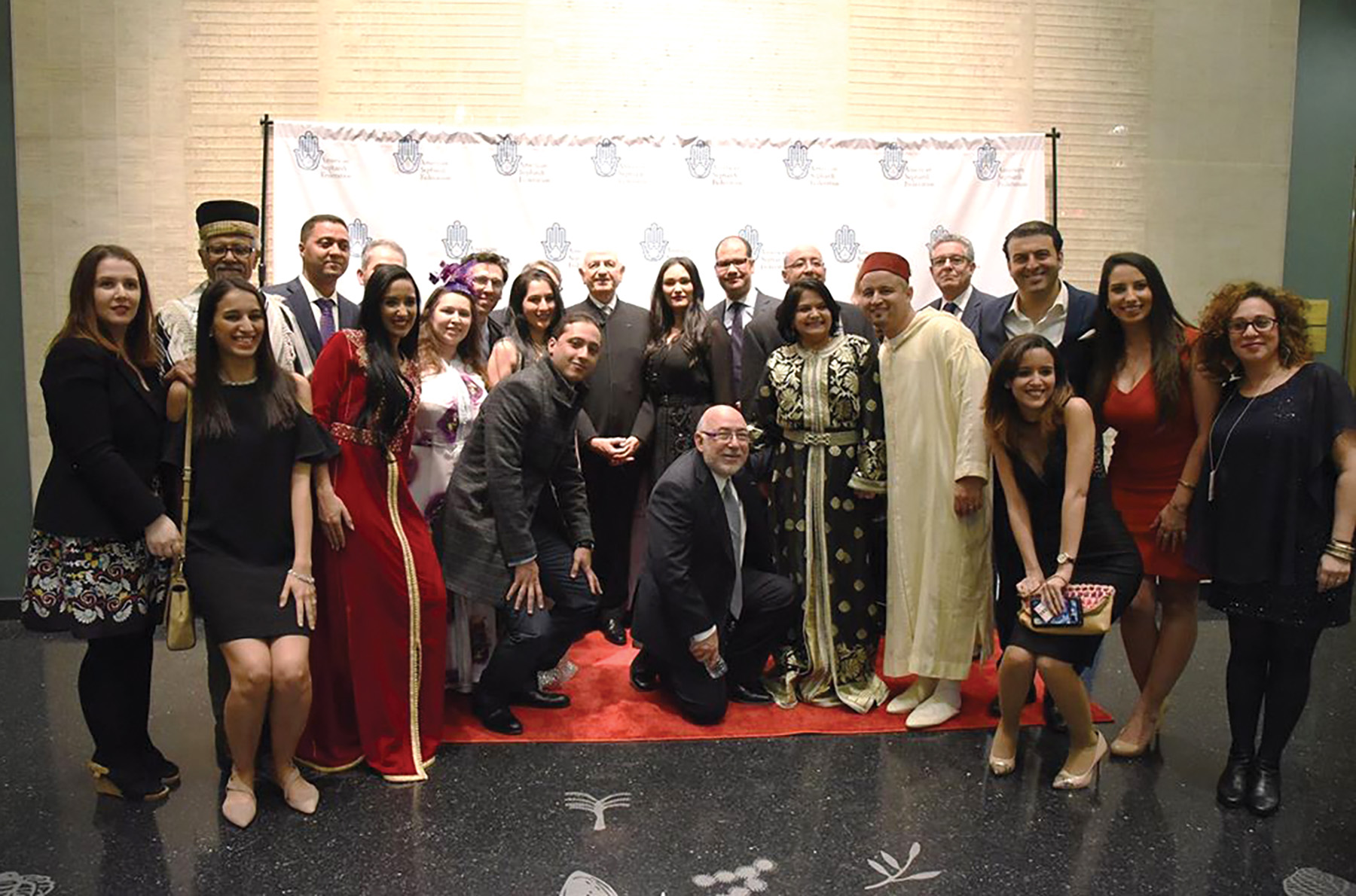 A press conference for the 2017 New York Sephardic Jewish Film Festival. The festival, now in its 22nd year, has helped illuminate the Sephardi/Mizrahi story. Americansephardi.org

Friedman’s highly praised new book, “Spies of No Country: Secret Lives at the Birth of Israel” (Algonquin), focuses on the double identities of four young men in Palestine in the mid-1940s who risked their lives for a country in formation. Or, as he noted in describing the complexity of their lives, they were “Jewish refugees from Arab countries who pretended to be Arab refugees from Jewish communities.”

Recruited to form an Arabic-speaking sector of the nascent Jewish intelligence effort that would become the Mossad, the young men posed as Arabs in Damascus, Beirut and other enemy sites, knowing that one slip of the tongue could mean death.

“Not only were they struggling with multiple identities as spies,” Friedman noted, “but also with being accepted as Israelis” in a society that was 90 percent Ashkenazi at that time.

He explained that after moving to Israel from Canada 24 years ago, when he was 17, he came to realize that the traditional Ashkenazi narrative “doesn’t explain Israel of today,” and he wanted to address the fact that “there are stories that need to be told” about this vital segment of society.

Bitton, whose family is partially Syrian, Moroccan and Spanish, said that reading Friedman’s book was “an emotional experience” for her, “redemptive,” in part because it raises the question: “why has it taken this long” for these stories to be told?

“It’s so important to tell these human stories, as you did,” she said to Friedman.

She noted that there is still an Ashkenazi/Mizrahi gap in Israeli society and that “we celebrate the gains and recognize the flaws” while striving to combat ongoing discrimination.

“As a progressive feminist, I reject the Western attempt to only look at Sephardi communities through Western eyes,” Bitton said. “If we really want diversity, we need to bring in voices that sometimes make us uncomfortable.”

That message resonated with me, and several days later I contacted Bitton, whose doctoral thesis at NYU is on the experience of a contemporary Sephardic community in the U.S. We spoke about the Ashkenazi-Sephardi gap in the U.S. and what can be done to help close it.

She began by noting that the issues are fraught with complexities, even including the terms “Mizrahim,” which generally refers to Israelis originally from the Arab and Muslim world, and “Sephardim,” which she applies to define non-Ashkenazi American Jews who identify as Sephardim, some of whom have roots in the Iberian Peninsula and some from the Middle East and North Africa.

“Part of the challenge is that American Jews know so little” about the narrative and history of the Sephardi and Mizrahi communities, Bitton said. She sometimes wonders if that ignorance about Mizrahim in Israel is willful.

“Why do the American Jews who take seriously their responsibility as Zionists and who ask difficult questions about Israeli policies,” she asked, “not address the discrimination Mizrahim experienced, especially in the early decades of the state?”

Bitton wondered about American Jews who speak with “nostalgia about the ruling Labor Party” under David Ben-Gurion and his successors for the first three decades of the Jewish state without questioning his government’s policies. Those policies encouraged the flood of immigrants from Arab and Muslim countries but treated the new citizens as second-class, housing them in maabarot, primitive tent cities, in periphery towns in disproportionate numbers to other immigrants. Even many historians who portray Ben-Gurion as a brilliant, heroic national leader cite his biased, if not racist, policies toward Mizrahim.

It took until 1977 for the growing Mizrahi population to flex its political muscles in the surprise election of Menachem Begin as prime minister. An Ashkenazi Jew, he nevertheless recognized and tapped into the bitterness and anger of a proud community that felt ignored by the Labor/Ashkenazi elite.

(There are strong parallels here to the surprise 2016 election of Donald Trump, champion of the anti-elite segments in the U.S. that perceived themselves disregarded by those in power.)

Four decades after Begin’s victory, Mizrahi Israelis remain loyal to the Likud and other right-wing parties, now dominant in Israel. Some attribute this political support to bitterness over the early years of statehood under Labor; others suggest that the long history of discrimination under Arab or Muslim rule has made Mizrahim deeply suspicious of peace efforts. It could well be due to a combination of both.

In addition to moral and historical reasons for recognizing the narrative of Mizrahi Israelis, there is a political reason too: Such an account would counter the Arab depiction of Israel as a colonial Western power. Showing solidarity with Mizrahi/Sephardi Jews here and in Israel could help blunt the intersectional left’s critique of Israel. It would put the Jewish community on record recognizing the “second-classness” of minorities here and in Israel.

Bitton suggests that American Zionists have embraced Israel in their own Western image, neglecting to understand or communicate with Mizrahim and Sephardim in a serious way. “It’s a condescending attitude,” she said, reiterating the point she made at The Jewish Week Forum that “there are too few voices in the American Jewish community willing to really talk seriously about these issues.”

Zion Ozeri, an internationally renowned New York-based photographer who was born in Israel of Yemenite parents, has been trying to promote such dialogue here for years. “We should be part of the American Jewish discourse,” he says of the Sephardi community, “but we’re not even at the table.”

He recalled that when AJC created its Muslim-Jewish Advisory Council several years ago, with the goal of advocating for issues of common concern, not one of the several dozen members chosen came from a Mizrahi/Sephardi background. Upset, Ozeri said he arranged a meeting to discuss the situation and was told that Haim Saban, the American-Israeli billionaire who was born in Egypt, had been invited to join but did not respond.

“We would enrich the dialogue, having a history of living in Islamic countries for centuries,” Ozeri said of Sephardic Jews here, but American Jewish leaders “don’t seem to realize the benefits of including our voices and perspectives.”

(In response, the AJC says the council has evolved since its launch in November 2016 and that “several co-chairs and members of the Council’s eight regional affiliates across the country are Sephardic Jews.”)

Ozeri acknowledges that American Sephardi communities tend to be insular, have internal turf issues and often are divided over whether to seek inclusion in mainstream Jewish communal life or keep to themselves.

Both Ozeri and Bitton, despite their frustrations, noted signs of progress, particularly among younger Sephardim here who are more outspoken than their elders and want to be heard. In addition, the new state-of-the-art Moise Safra Center on the Upper East Side is sure to have a major impact on the community and attract Sephardim in particular. It will promote “Jewish values and love for Israel,” according to its website, and welcome all Jews to its cultural events and synagogue, but with a focus on Sephardi traditions.

Those traditions offer much that Ashkenazi Jews can learn from, including an emphasis on family, with great respect for the elderly; community cohesion and loyalty; and traditional religious practice that has no denominational divides and is infused with spirituality though not necessarily a commitment to all of the mitzvot.

I don’t know whether Sephardic and Mizrahi Jews can help make peace with the Arab world they know well (for better or for worse). But it seems clear that a renewed and serious effort is required for all Jews to learn and appreciate more about each other’s past and present to ensure a Jewish future.