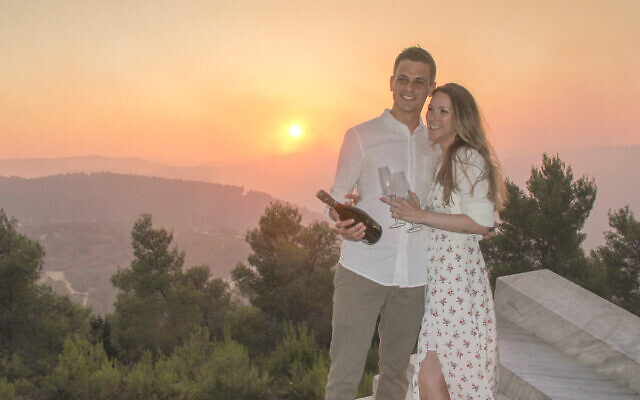 “Date your best friend is the takeaway from our story,” both Amy Landsman and Jared Sapolsky agree.

Adds Jared, “Take your time and marry the right person.”

Their story began at Kennedy Airport, when 40 Birthright participants met up to board their flight to Tel Aviv. It was their first trip to Israel and Amy was traveling with three good friends from Maryland. They noticed Jared almost immediately. “Within 20 seconds, he was part of our group,” Amy recalls.

“And 10 days later, when the program ended, Amy and I were good friends and wanted to hang out together when we returned to New York,” said Jared.

They saw each other a week later and “continued to see each other regularly – either with friends or just the two of us and soon became best friends,” said Amy.

Whether to date your best friend, of course, is a running dilemma in rom-coms and advice columns, as Jenna Burch pointed out in The Washington Post. One of her suggestions: “If you’re not ready for something serious, it might be best not to date a friend.”

“I agree 100%,” said Jared. “That’s why it took us so long to start dating. We needed to wait because our friendship was so important to us both. We never officially talked about it, but we both knew that once we started to date, it would be forever.”

Said Amy, “There is so much I appreciate about Jared. For 12 years, I was very close to my dog and when she got sick and died this past year, Jared was by my side almost the entire time. We rarely left our apartment.”

Amy is from North Potomac, Maryland and moved to New York about nine years ago, where she studied at LIM College. Her entire professional life has centered on food. She started out as a server with Tao Group Hospitality and six years ago became the executive assistant to Chef Chris Santos, a judge on the Food Network’s series “Chopped.” Amy loves cooking, and it’s no surprise that she does the cooking at home.

Jared was raised in Bayside, Queens and graduated from the University at Albany where he studied political communications. He now uses those skills in his job at the American Israel Public Affairs Committee as an associate area director for Manhattan. He is a co-founder of Guardian Self Defense, a nonprofit that teaches Krav Maga.

Jared planned his proposal to Amy at sunset, when their Birthright group arrived at the Yad Kennedy Memorial Lookout in the Jerusalem mountains. Jared bent down on one knee. His cohorts had their cameras ready and immediately relayed FaceTime messages to family in the U.S.

Dr. Leah Hakimian currently researches how Jewish couples meet and marry. In the ’90s she founded two nonprofit Jewish matchmaking programs, and continues to champion the role of community in helping singles meet. She lives in Jerusalem and Great Neck, New York.