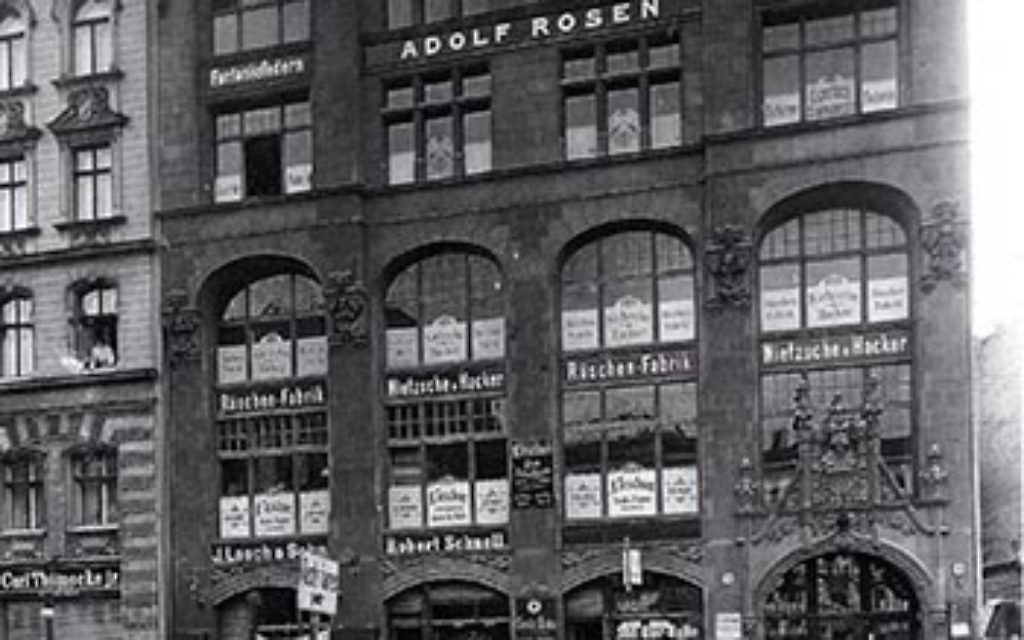 “Stolen Heart,” a small powerful exhibition at Leo Baeck Institute, shows how Jewish building owners in the center of Berlin were robbed during the time of Nazi rule.

Originally shown in Berlin, the exhibition focuses on five families’ real estate in Mitte, Berlin’s mid-town: the Intrator/Berglas families, who owned a textile factory seized in 1937, after which it produced Nazi flags and uniforms, and in 1941 “an order for close to a million” yellow Star of David patches; the Gadiels, who owned a large clothing store; the Freudenbergs, who owned a department store; the Panofskys, partners at a bank; and the Fuchses, who owned a small house that Eugenie Fuchs, an artist, tried unsuccessfully to retain after she had emigrated to Paris. This intimate focus lets the curators show in some detail the machinations by which the Nazis stole real estate from Jews, and the sections move family by family.

The most moving objects in the exhibition are a pair of long gloves and Bally high heels from the Freudenberg family – brought to Palestine in the late ‘30s and forgotten in an attic as the Freudenbergs remade their lives on a kibbutz. Most of the other families whose properties are described did not survive the Nazi period, though relatives escaped.

Much effort has gone into a 3D-printed time-lapse video map detailing the family properties in context with aerial views of the city center from 1933 to present day, designed by C&G Partners. It takes up most of the show’s floor space, and, while meticulous and dynamic, showing through photographic overlays nine periods of central Berlin history, it will be most evocative to those viewers who know Berlin well.

A final panel describes what happened after the war. Mitte was entirely within the part of the city that became East Berlin. From 1949 to 1990, the German Democratic Republic did little by way of restitution to Jewish families. After Germany’s reunification more families went to the courts pressing for restitution. These cases, though, are extremely difficult to conduct – first, because restitution is possible only for buildings that survived the war, though bombing destroyed 90% of Berlin’s center; second, because the destruction of records makes it difficult to prove ownership; and third, because anti-Semitism is not dead in Germany. Even when descendants of the victims of Nazi robbery have won cases for financial compensation of lost property, the amounts they have received have been around 5 – 10% of the properties’ value. Only 15 suits for restitution of surviving buildings have been won.

The recent opening was attended by the descendants of the families, and they were many – about a third of the auditorium at the Center of Jewish History was set aside for their use, and it was full. Harold James, an economic historian at Princeton, described how the Nazis’ intention, during the years when Jews could still emigrate, was not simply to strip them of their property for the sake of gain, but to inflict humiliation, to make Jews appear as people of no worth in their new countries. The presence of the many descendants of these families, highly presentable and proud to be there, gave the lie to this plan. So too did the contribution on the panel discussion afterward from Joanne Intrator, a New York psychiatrist who has successfully fought for restitution of one of her family’s buildings. But as she and Benedikt Goebel, one of the curators, made clear, that fight was a long, hard, expensive and quite anomalous in its success. The devaluing of Jews and their property continues still, and it was hard not to leave the exhibition’s opening without the sense that the war on this front will never end.

“Stolen Heart: The Theft of Jewish Property in Berlin’s Historic Center, 1933-1945” is on view at the Leo Baeck Institute, Center for Jewish History, 15 West 16th Street, Manhattan, through October 2016.

Liz Denlinger curates a collection of rare books and manuscripts at the New York Public Library and is at work on a novel about a boarding school in 1955.