BERLIN — As a light rain fell on a frigid winter morning, a few dozen people gathered at Oranienplatz near the Berlin city center, cleaning supplies in hand. At this grassroots meet-up on International Holocaust Remembrance Day, a mix of English, Hebrew and German could be heard as newcomers gradually joined the group, making introductions and hugging old friends.

After briefly studying some maps of the area, organizers Ben Fisher and Anne Aulinger broke up the collective into several smaller crews, each assigned a patch of territory in the surrounding neighborhood. Their mission: to clean stolpersteine, or “stumbling stones,” commemorative brass cobblestones dedicated to Holocaust victims embedded in the city’s sidewalks.

The community project is now in its second year and relies on social media and word of mouth to bring a diverse group. Participants included Jews, interfaith couples, non-Jewish Germans, and others from around the world, including a doctor from Italy and a Turkish film director.

As volunteers got down on their hands and knees to carefully clean and polish the faded brass plaques, the image of Jews forced by the Nazis to scrub the streets – a common humiliation meted out during the Holocaust – came to this reporter’s mind. 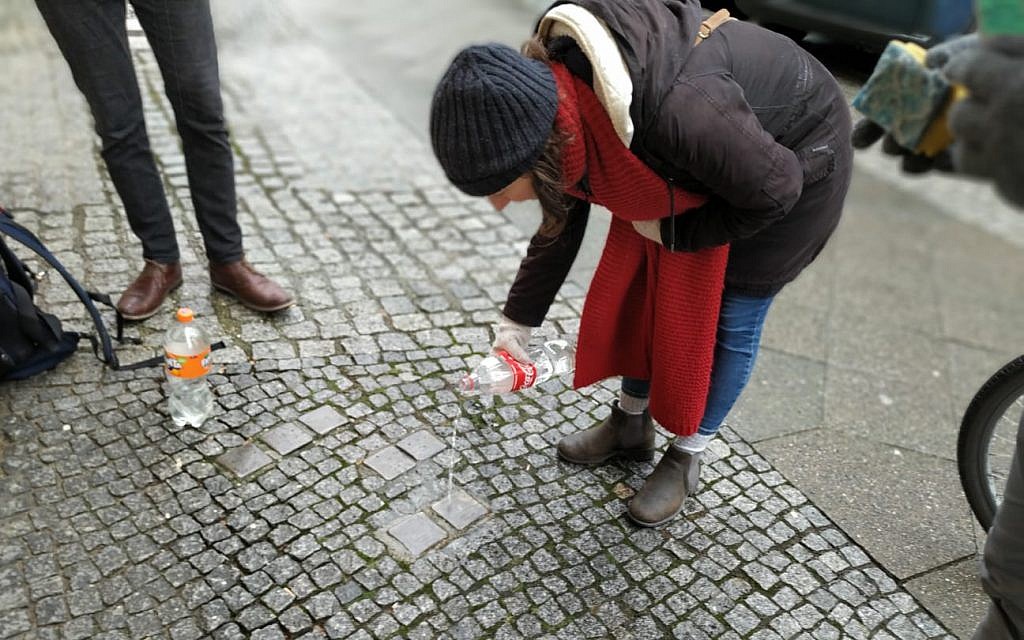 The neighborhood commemoration bore distinct differences from more traditional ceremonies held around Germany – something Fisher and Aulinger, both grassroots activists, said was by design.

“We had the idea of why not do a cleaning in the area where we live, to commemorate, and not to make it a big event with politicians speaking, and all that – just a community thing,” said Aulinger, a German-born political educator who, while not Jewish, has worked to combat racism and anti-Semitism over the last years, including in her work as a fellow at the human rights nonprofit Humanity in Action. 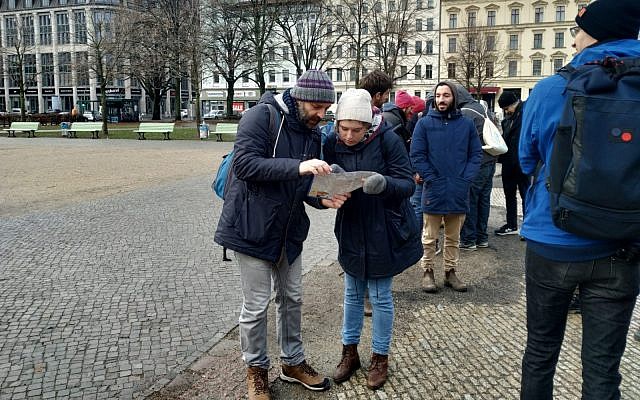 “It’s a really low-key thing to do. The stolpersteine are something I grew up with,” said Aulinger. “When they began to lay them in Germany I was still a child, and I think it’s something I basically took for granted because I’d never realized until some years ago that it’s really the initiative of individual people. The project depends on people themselves to bring it to their town.”

Launched in 1992 by German artist Gunter Demnig, the stolpersteine project currently has over 70,000 stumbling stones in more than 1,200 towns and cities throughout Europe. The small memorials are located on the street outside the last known address the victim voluntarily frequented before being relocated or killed by the Nazis. 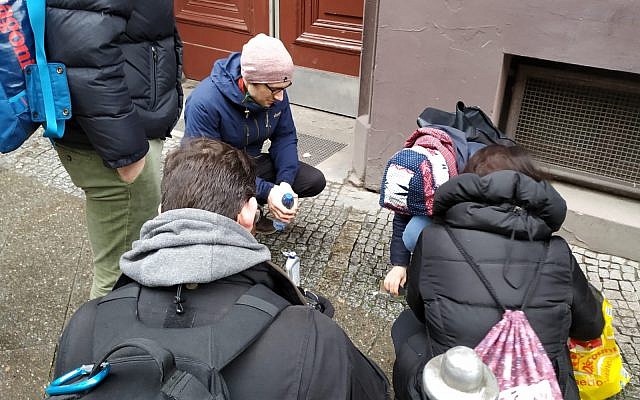 Most of the commemorated are Jews, but stolpersteine are dedicated to all victims of the Nazis, including Roma, homosexuals, and Jehova’s Witnesses. The memorials rely on individual citizens to investigate the history of the victims and apply for a plaque in their honor. The wait to have a new stolpersteine installed is currently up to five years.

“I’ve always been fascinated by the stolpersteine,” said Fisher, an Israeli-born local trade expert and tour guide who has lived in Berlin for the past four years. “When Holocaust Remembrance Day came last year, I said, ‘Let’s do something.’ We didn’t really know what to do, and Anne and I are grassroots kind of people. You can be a member of a party, a union, something, but at the end we like to do stuff. So we invited people though Facebook. It got attention and got bigger and bigger.” 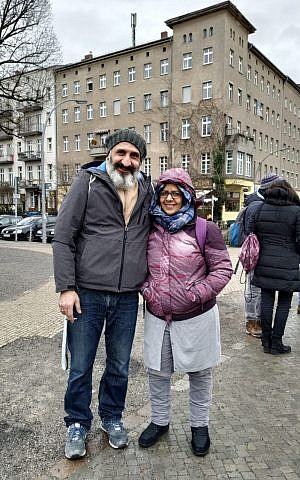 Fisher said that while the group was diverse, it appealed to some more than others – particularly to Israelis and non-Jewish Germans.

“Young Israelis want to have a way to interact with this part of their identity, but would never affiliate themselves with the institutional way of doing that,” Fisher said, noting that it was also a good way to meet new people. “German Jews already have their own institutional way of participating. Israelis are lacking that because they don’t really ‘belong’ here.”

“It’s also an interesting project for non-Jewish Germans. It gets people engaged, it’s a way for young Germans to reach out. If the core, the essence, is positive, good things will happen. You just need to create a platform for people to meet,” Fisher said.

Ibrahim Karaman is a Turkish filmmaker who spent his childhood and much of his adulthood in Berlin. He recently returned here to promote his new series, entitled “Stateless,” about a German citizen raised in Istanbul who discovers his grandfather’s secret Nazi past. The six-part series will premiere at the Berlin Film Festival early next month.

“Today there are stumbling stones on the very streets I grew up on as a child in Kreuzberg,” Karaman said. “When I was a kid, I had no idea about the horrible thing that happened, but now I’m back in Berlin and can commemorate it with new understanding and maturity.”

Part of Karaman’s series was filmed in the neighborhood. “Since this area was also to be cleaned and remembered today, it was especially important to me to come here,” he said.

Israeli anthropologist and former Hebrew University professor Tamar Rapoport, who now lives in Berlin, has researched the stolpersteine for years. The stones are especially notable, she said, because of their biographical information on each individual.

“It might not seem like a lot of information,” she said. “But the date and place of birth and death are the most important moments of a person’s life, and these are listed individually on each separate stone. In fact, the artist was inspired by the quotation from the Talmud that says that a person is only forgotten when their name is forgotten.” 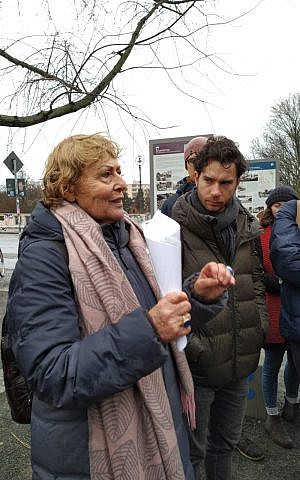 Rapoport, who addressed the group as they regathered at the conclusion of the afternoon’s work, also stressed the importance of community for the foundation and continuation of the stolpersteine memorials.

“This is the biggest commemoration project in the world,” Rapoport said. “And it’s almost entirely driven by volunteers.”

As the concluding ceremony wound down, the organizers asked if anyone had a story to share. Thirty-three-year-old Stefan, who grew up in southern Germany, stepped forward to address the crowd.

Stefan said that despite the huge amount of painful information the family was forced to suddenly process, there was a silver lining: His great-grandfather had two surviving brothers who fled to Haifa in 1939. This past October, Stefan and his family visited their newfound Israeli relatives, who, he noted with pride, number more than 30.

“It was harder than I thought to talk about it,” Stefan later told The Times of Israel. “The personal connection to the incredibly sad and brutal fate of each of those individuals who share your own name is quite overwhelming.” 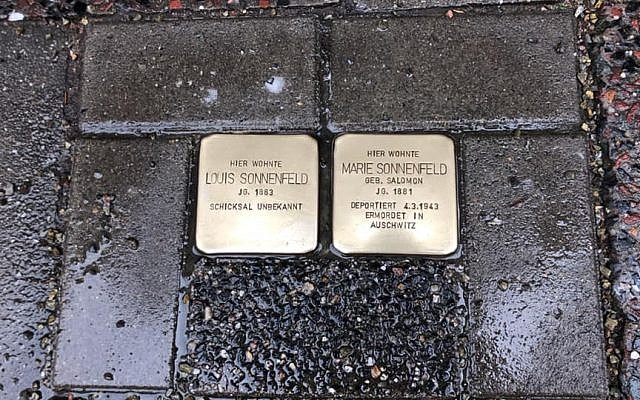 Cleaned and polished stolpersteine in Berlin. (Yotam Cohen) Via The Times of Israel

But, he said, “it was at times a relief to share these experiences. Each Israeli family has such a story about loss to tell.”

For Stefan, polishing the stolpersteine “somehow makes these individuals’ fate visible in the public space again.”

“By cleaning them, you’re caring for them, you’re remembering the person, even if that will be never enough to make up for the loss of that person’s entire life story,” said Stefan.