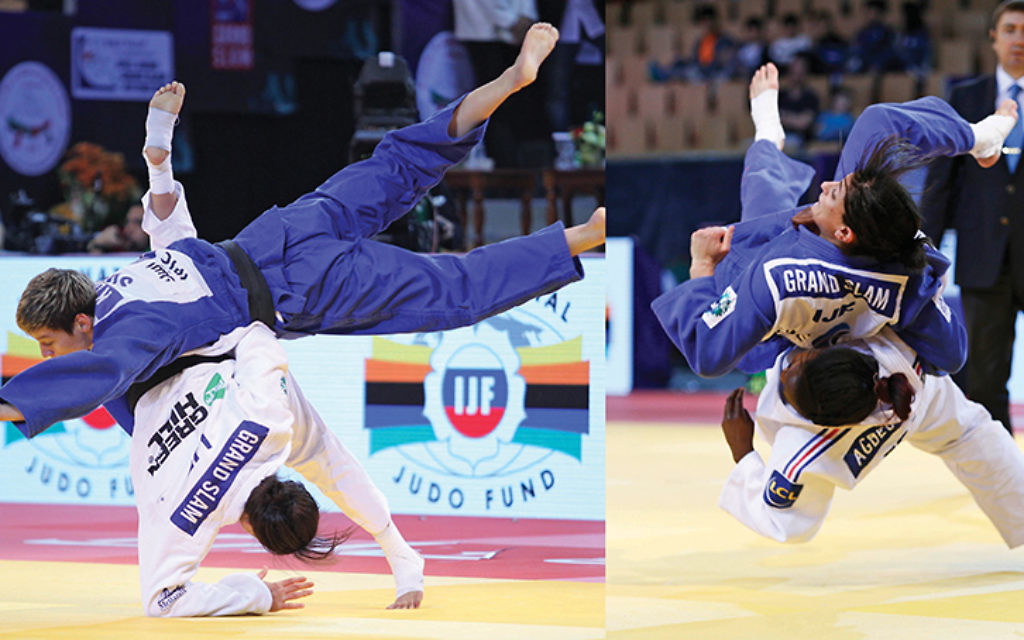 The box score for Israelis who took part in an international judo tournament in Abu Dhabi, capital of the United Arab Emirates, last week: bronze, but no blue-and-white.

Under an agreement reached in the weeks before the Judo Grand Slam competition in the Arab nation, eight representatives of the Israel Judo Federation were allowed to compete without the Israeli flag on their uniforms or the initials ISR next to the athletes’ names on the scoreboard. Instead, the initials of the International Judo Federation appeared.

The Israeli delegation returned with two bronze medals — Yarden Gerbi in the women under 63-kilogram weight class, and European champion Sagi Muki in the men under 73-kilogram grouping, in the white uniforms at top, and at awards ceremonies — and some golden memories.

“Everybody in the venue knew that our athletes were from Israel and I was really moved when I saw the public cheering for our competitors, especially the younger supporters,” Moshe Ponte, president of the Israel Judo Federation, said in a statement on the International Judo Federation website.

He had approved the compromise suggested by Marius Vizer, president of the International Judo Federation, to allow Israelis to participate under the putative cloak of anonymity in the Arab nation that does not recognize Israel politically.

“We really benefited from our time in Abu Dhabi,” Ponte told the Jerusalem Post. “We represent Israel across the world and bring Israel a lot of honor.”

The Grand Slam competition is part of the qualification process for the 2016 Summer Olympics — Israel’s bronze-medal-winners earned 200 points, while gold-medal-winners got 500.

Miri Regev, Israel’s Culture and Sports Minister, however, was critical of the Israelis’ decision to take part in the tournament without being openly identified as Israeli. She said she would call an emergency meeting with heads of local sports associations to help her avoid similar situations in the future. “The banning of the Israeli flag in an international competition of this magnitude is a failure which I will not overlook,” she told the Post. “We will not compromise in this matter.”