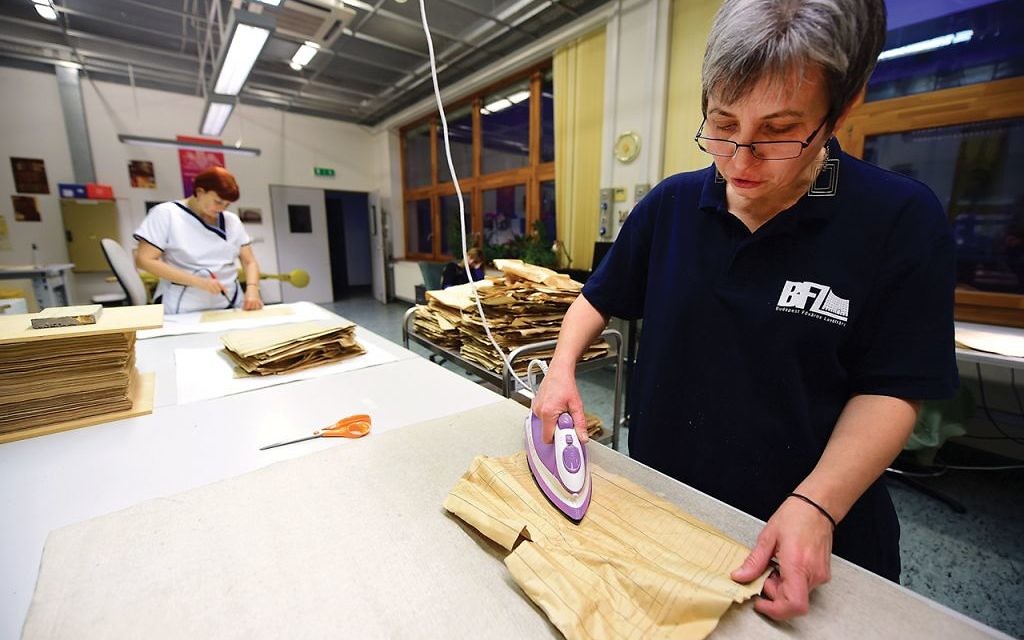 Sometime in early 1944, some Jewish residents of Budapest hid a cache of documents that probably outlived them.

The collection of census forms, which grew out of a Nazi effort to determine the racial background of the city’s apartment buildings, were placed behind a wall, which was then sealed, in a room in the Jewish residents’ own apartment, remained unknown and undisturbed until it was recently discovered.

A Hungarian couple, who now live in that apartment, were renovating one of the rooms. A worker shoved a screwdriver through a crack in the wall, and noticed some handwriting.

“We thought we’d ruined the neighbor’s wallpaper,” Brigitte Berdely, co-owner of the apartment, told AFP. Then she and her husband looked through the crack and saw what the handwriting.

Carefully removing each brick from the wall, they uncovered in a cavity in the wall what turned out to be 135 pounds of dusty census forms, many caked with pieces of plaster, but protected over the years from major fading or deterioration because they were in a watertight, airtight location.

The 6,300 documents, turned over to the Budapest City Archives, recorded the facts of the capital’s Jewish population before the deportation to Nazi death camps and liquidation campaign began in the autumn of 1944. Many Jews died in the Budapest Ghetto or were shot on the banks of the Danube.

Shortly after the May 1944 census was conducted, the occupation Nazi authorities moved some 200,000 Jews into 2,000 “Yellow Star Houses” that were marked with a Magen David painted on the doors.

“The content and scale of the findings is unprecedented,” Istvan Kenyeres, director of the archives, told AFP. “It helps to fill a huge gap in the history of the Holocaust in Budapest.”

If the wartime owners of the Budapest apartment did not claim the documents after the war, it is likely that they were among the Hungarian Jews that died in the Holocaust, most in Auschwitz.

Archives employees are literally ironing the documents, above, to make them easier for researchers to read.

Kenyeres said more documents like the recent treasure trove may exist in Budapest. “People should look behind their walls — you never know what could be there.”