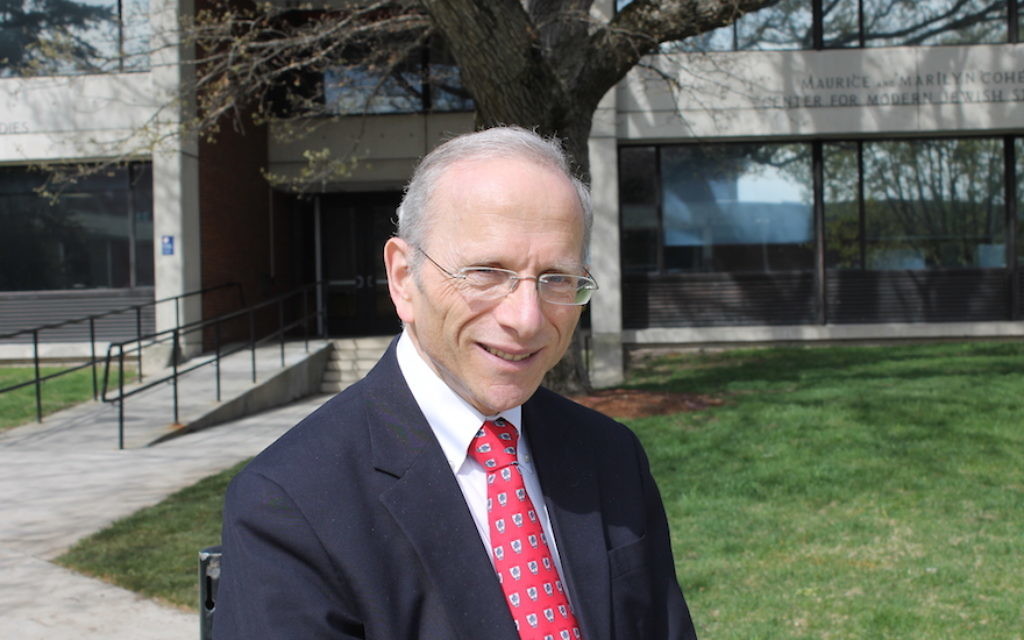 Waltham, Mass. – When Jonathan Sarna was diagnosed with esophageal cancer in 1999 at the age of 44, it changed his life.

Already a highly regarded historian at Brandeis University, Sarna was in the midst of writing his seminal study of American Jewish history when he realized with alarm that he might never finish it.

He underwent chemotherapy, radiation treatment and surgery. Though he didn’t know it at the time, doctors gave him a one-in-five chance of surviving. Then, slowly, the professor began getting better. After a year, Sarna was writing again with renewed focus and a firm deadline: He wanted to finish the book in time for the 2004 celebrations of the 350th anniversary of American Jewish life.

The book, “American Judaism: A History,” came out in March 2004. The organization in charge of the 350th celebrations anointed Sarna its chief historian. He traveled the country delivering lectures, and “American Judaism” won the Jewish Book Council’s Book of the Year award.

“That book was life-changing,” Sarna told JTA in a recent interview in his large, cluttered office at Brandeis.

“I would say my great regret at the time of my illness was that I had not finished ‘American Judaism,’ and I promised myself that if all went well I wouldn’t take on other things until the book was out,” he said.

The book was translated into Hebrew and Chinese, sold more than 30,000 copies and became an indispensable resource on the subject. Today, students at the Reform movement’s Hebrew Union College-Jewish Institute of Religion, the Conservatives’ Jewish Theological Seminary and Orthodoxy’s Yeshiva University don’t study the same edition of the Bible, but they all study “American Judaism,” points out Sarna, who is working on updating the book for a new edition.

“I consider that my most important book. It certainly took me the longest, and it allowed me to put my stamp on the field,” he said. “It sold more books than any other I have done. It does change your life a little bit when you realize that you can talk to a broader audience beyond the academy. In the eyes of many people, I became ‘the American Jewish historian.’ It was a breakthrough.”

Now 61 and several books later, Sarna is something of a rock star in the world of Jewish academia — though neither he nor any of his colleagues would ever use that term to describe the diminutive professor with sparkling blue eyes and a vocal inflection that often bears traces of his parents’ British roots.

Sarna is the chief historian of the National Museum of American Jewish History in Philadelphia, chairs the Hornstein Program for Jewish Professional Leadership at Brandeis and recently concluded a stint as president of the Association for Jewish Studies. He’s on the board of JTA’s parent company, 70 Faces Media, and too many other institutions to count. He commands $5,000 a speech.

Last month Brandeis crowned Sarna, who has taught at the school since 1990, with the title university professor – an exceedingly rare distinction. Brandeis bestows it on faculty whose “renown cuts across disciplinary boundaries” and “who have achieved exceptional scholarly or professional distinction within the academic community.”

Among journalists, Sarna is known as the go-to scholar for erudite, succinct, quotable analysis on American Jewish history. But he’s also a favorite sage for aspiring Jewish academics; more than 30 doctoral dissertations have been written under his direction. That’s partly why he decided to make Brandeis, the Jewish-sponsored, nonsectarian university founded in this Boston suburb in 1948, his professional home.

“I came to Brandeis not only because I thought that Brandeis should be a major center of American Jewish history, but also because I thought I would enjoy teaching a wide span of future Jewish leaders covering all the movements,” Sarna said.

Brandeis also was his undergraduate alma mater and until 1985 the professional home of his father, the late Bible scholar Nahum Sarna.

In recent years, Sarna has become a sought-after commentator on contemporary American Judaism, too. Though he demurs from offering predictions about American Jewry’s future, Sarna draws on his deep scholarship to highlight some of the lesser-noticed trends he believes will play a big role in shaping that future.

Those who talk with certainty about where American Jewry is headed based on current trends, such as declining affiliation rates, should remember that the story of American Jewry has been more cyclical than linear, Sarna cautions. In the 1930s, community leaders watching young Jews becoming communists and leaving synagogues predicted the disappearance of American Jewry, but they failed to foresee the great religious revival of the 1950s.

American Jewry may be in a “religious recession” today, Sarna says, but that’s not necessarily predictive of tomorrow.

Among the other trends Sarna says are worth watching:

“These are changes of enormous significance that desperately need to be thought about,” Sarna says. “Today there is a massive disjunction between how we think of ourselves and how we actually are.”

Even as a kid, Sarna seemed destined for academic greatness. His parents were both British intellectuals who immigrated to America in 1951. His mother, Helen, was a librarian at Hebrew College. His father taught at Philadelphia’s Gratz College and then JTS before settling at Brandeis, where he achieved wide renown. Jonathan, born in 1955, was the family’s first American-born child; he has an older brother, David.

When Sarna chose to focus on American Jewish history, it turned out to be one of the few Jewish subjects his British-trained father knew nothing about. His interest in the subject dates back to his teen years. His senior thesis at Brookline High School in suburban Boston was about the history of American anti-Semitism, and even in his driver’s education course Sarna went historical, writing about Henry Ford’s anti-Semitism for a required car-related essay. He got an A on the paper but failed the road test.

“Henry Ford had the last laugh on that one,” Sarna said wryly.

Sarna’s career has spanned the colonial period to the present, including book-length histories of the Jewish communities of New Haven, Cincinnati and Boston. His most recent books, “Lincoln and the Jews: A History” (co-authored with Benjamin Shapell) and “When General Grant Expelled the Jews,” both won critical acclaim.

The professor takes particular pride in being something of an insider in each of American Jewry’s three main religious denominations. Until the age of 10 he grew up at JTS, the flagship Conservative institution where his father taught. Sarna himself was reared in Orthodox institutions, including a post-high school year at the rigorously Orthodox Mercaz HaRav yeshiva in Jerusalem. And Sarna taught for more than a decade at Reform’s HUC.

Sarna attends an Orthodox shul, but his wife, Ruth Langer, a theology and liturgy professor at Boston College, is a Reform rabbi. The couple have two children: Aaron Sarna works for Google, and Leah Sarna is studying to be an Orthodox clergywoman at Yeshivat Maharat in New York.

“I know the whole spectrum of the American Jewish world as an insider in a way I think few people do,” Sarna told JTA. “That’s given me a breadth of understanding and even sympathy with each community. I think I’m at my best when I help different groups in American Jewish life understand one another.”

His most recent book, too, almost didn’t happen. In May 2014, during a weekend visit to Yale for his daughter’s graduation, Sarna collapsed while walking back from the Hillel center to his hotel and went into cardiac arrest. Because it was Shabbat, he wasn’t carrying a phone.

Fortunately, a cardiologist happened to be driving by and Sarna immediately was taken to nearby Yale-New Haven Hospital. The speed of the emergency response not only saved Sarna’s life but also helped him avoid the irreversible brain damage that often occurs in patients who suffer cardiac arrest. His physicians told Sarna that his heart blockage could be traced back to the radiation treatment he had received for his cancer a decade and a half earlier.

Two years on, Sarna has had to slow down a bit – five or six hours of sleep a night is no longer sufficient, he says ruefully – but his rate of production hardly shows it.

Before he even left the hospital at Yale, Sarna resumed edits on his Lincoln book. This fall, he’ll be going to Jerusalem on sabbatical, where he’ll be at the Israel Institute for Advanced Studies working on his new book about a little-known 19th-century American Jewish female writer and poet.

“This is what I’ve been put on this earth to do,” Sarna said, “to write about and read about the American Jewish experience.”