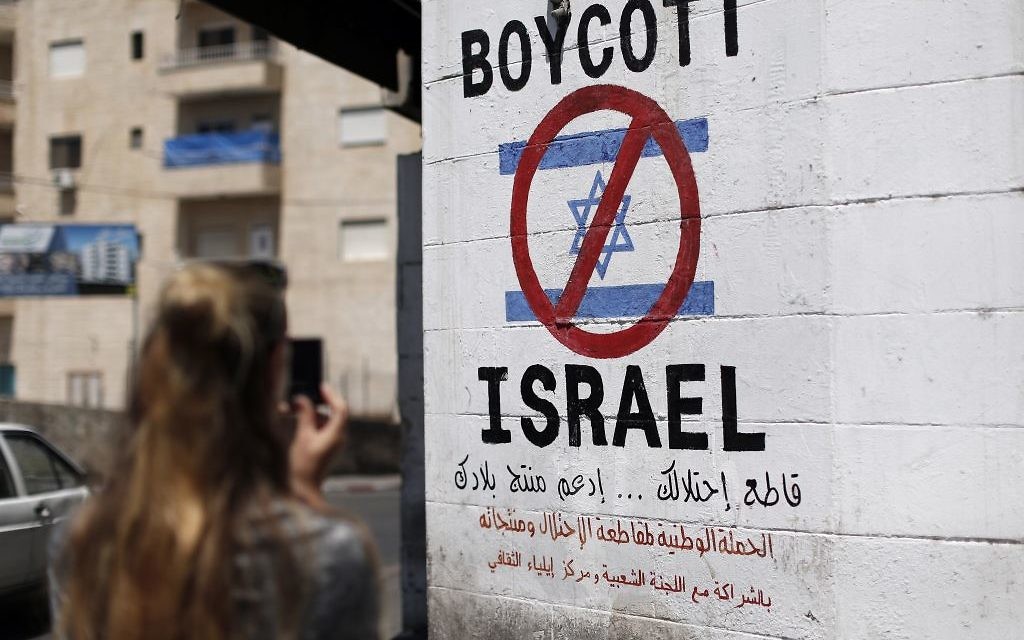 Everyone, it seems, is in the BDS game these days: Sheldon Adelson, the Presbyterian Church, American universities and their students, national Jewish groups — and, not least, Congress and state legislatures.

The hot spot of the Boycott, Divestment and Sanctions movement, of course, is the college campus. BDS has been with us a quarter-century and more, so why the sudden explosion of activism, especially on campuses?

The issue has become a worldwide one, with calls from many quarters to “punish” Israel for its alleged misdeeds by boycotting Israeli products and academics, divesting investments and applying a range of sanctions. BDS became a popular technique early in the second intifada, with pro-Palestinian activists musing, “Hey, it worked with apartheid; maybe it will work with Israel!” Academic sanctions against Israel, especially in the U.K., became commonplace. And in America, where a number of mainline Protestant churches have had boycott and divestment on their agendas since the 1980s, there has been in recent years an uptick in activity.

But the main battleground, in 2015, for BDS has been the campus. For one thing, the campus is the most sensitive, and the most visible, of the BDS arenas. For another, the campus is blessed with the burdens of freedom of expression — whatever that means.

One reason for what’s different in 2015 is that there is a right-wing Likud government in Israel, one that is tailor-made to exacerbate an already hot situation. Closer to home is the emergence on campuses of Students for Justice in Palestine (SJP), which has become a vocal, well-organized, highly effective group on many campuses. SJP has focused much of its activity on attracting uninvolved students to BDS activism. The Anti-Defamation League reports that there are only 29 campuses on which there are unusually active SJP groups, but the number is growing. Almost every campus has some sort of BDS activity.

Yet at the same time, in terms of the impact of BDS activity, anti-Israel activity and anti-Semitism — always a complicated relationship — the overwhelming majority of Jewish students on campus feel, and indeed are, secure. It’s important to note that, with all the BDS activity and activism, not one university has adopted a divestment policy. The pattern was established early on, when, in 2002, then-Harvard University President Lawrence Summers was faced with a serious divestment threat by faculty; he said in effect, “Not on my watch!” and declared that BDS is “anti-Semitic in effect if not intent.”

Summers was delivering an important message: Not all BDS activists are anti-Semitic; some may be — but even those who are not are creating a campus climate that may be conducive to anti-Semitism.

This dynamic, of course, suggests the question of the fine line between “anti-Israel” — that is, legitimate criticism of the government of Israel — and “anti-Semitic.” This threshold question is obviously subjective; some have a very low threshold: any criticism of Israel is anti-Semitism, or at least motivated by hatred of Jews. For others, anything goes.

My sense is that criticism of the policies of the government of the State of Israel — indeed, harsh criticism — is entirely legitimate. (The discussion within Israel, on a range of policies, is sharp and tough.) The point at which criticism of Israel shades into anti-Semitism is when the legitimacy of Israel, of the Zionist enterprise, is questioned.

One approach to fighting BDS, advocated especially by those who dramatically overstate the problem, is through anti-BDS legislation, and there is a momentum building in that direction.

Such legislation is a complicated matter, and falls into two categories. An example on the federal level was a provision in the 2013 trade bill, which provided that, in negotiations on trade with European Union countries, the EU resist boycotts of Israel. Legislation in the states is varied. An Illinois bill, for example, would prohibit investing pension funds in companies that boycott Israel. Other bills would cut off funding to schools that engage in academic boycotts. National Jewish groups, faced with the question of schools losing their funding if they engage in criticism of Israel, have mostly stayed out of this fray.

The larger legal question on campus, yet to be addressed, is whether BDS will create an environment hostile to Jews. This is a federal Title VI question. Title VI of the Civil Rights Act of 1964 prohibits discrimination in federally funded institutions, and almost every university in the land falls under this rubric. Legal analysts predict that there will be a spate of Title VI lawsuits. The hostile-environment issue is the one to watch; the Jewish community’s traditional commitment to freedom of expression will be under challenge.

What ought be done on campus? Most analysts suggest that education is the key, especially education that makes the case that Israel is not an apartheid state. Also important is strengthening the traditional alliances and coalitions in opposition to BDS and other anti-Israel activism.

At bottom, there are many voices in the Jewish community that suggest that it is not BDS that threatens Israel; it is Israeli policies (or lack thereof) in the West Bank that enable those who advocate BDS to have a life.

In the words of a senior Jewish communal professional, “It would be nice if Israel were to do a few things.”

Jerome Chanes, a regular contributor, is the author of four books on Jewish public affairs and history. He is a fellow at the Center for Jewish Studies of the CUNY Graduate Center and teaches in the City University system.