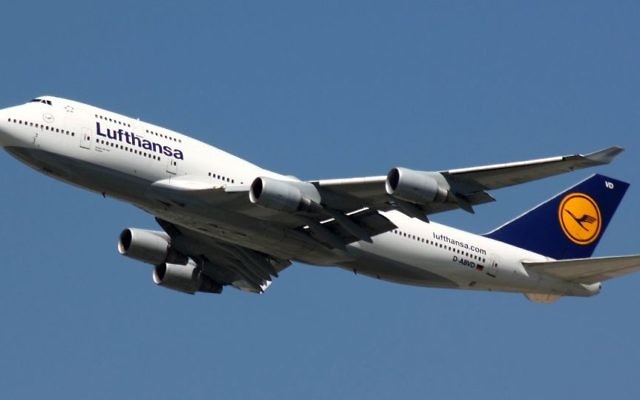 Five members of an interfaith delegation to Israel were prevented from boarding a Lufthansa flight from Washington, D.C., reportedly due to their activism on behalf of the Boycott, Divestment and Sanctions movement. Wikimedia Commons

Five members of an interfaith delegation to Israel were prevented from boarding their flight from Washington, D.C., reportedly due to their activism on behalf of the Boycott, Divestment and Sanctions movement.

The Jewish Voice for Peace organization said in a statement Monday that the delegation tried to check into its Lufthansa flight at Dulles International Airport, only to be told that the Israeli government had ordered the airline not to let the five passengers aboard.

In March, the Israeli parliament, or Knesset, amended the Law of Entry to prevent leaders of the BDS movement from being allowed into Israel. The amendment applies to organizations that take consistent and significant action against Israel through BDS, as well as the leadership and senior activists of those groups.

Lufthansa spokesman Tal Muscal confirmed that the delegation members were not allowed to fly per the Israeli government’s request. Lufthansa was not made aware of the reason for the order.

Muscal said the airline must obey government requests like these to block passengers from boarding flights.

“We don’t know who these people are,” Muscal told JTA. “We have no information as to why the Israeli government does not want them to enter. We simply have to abide by the rules and regulations of every country in which we operate.”

The Israeli Prime Minister’s Office declined to comment on the incident.

Three of the activists were from JVP, including a rabbi. The other two delegation members prevented from boarding the flight were Rick Ufford Chase of the Presbyterian Peace Fellowship in Rockland County, New York, and Shakeel Syed, a national board member with American Muslims for Palestine in Los Angeles.

The other 18 participants with the Interfaith Network for Justice in Palestine delegation arrived Monday morning in Israel and were allowed to enter after several hours of detention and questioning, according to JVP.

JVP states on its website that it supports boycott, divestment and sanctions against Israel.

“Israel denied me the ability to travel there because of my work for justice for Palestinians, even though I’m Jewish and a rabbi,” Rabbi Alissa Wise said in the JVP statement. “I’m heartbroken and outraged. This is yet another demonstration that democracy and tolerance in Israel only extends to those who fall in line with its increasingly repressive policies against Palestinians.

Syed said in the statement that he had his boarding pass in hand when “the Lufthansa representative informed me that they had a direct order from ‘Israeli immigration authorities’ to not allow us to board the plane. Furthermore, they refused to even show us the Israeli order.”

Following the passage of the Entry Law amendment, several groups that promote BDS planned to organize delegations to come to Israel and test the boundaries of the amendment.

An anti-BDS bill making its way through Congress would expand existing law that bans boycotts imposed by foreign governments to include those imposed by international organizations like the European Union and the United Nations.