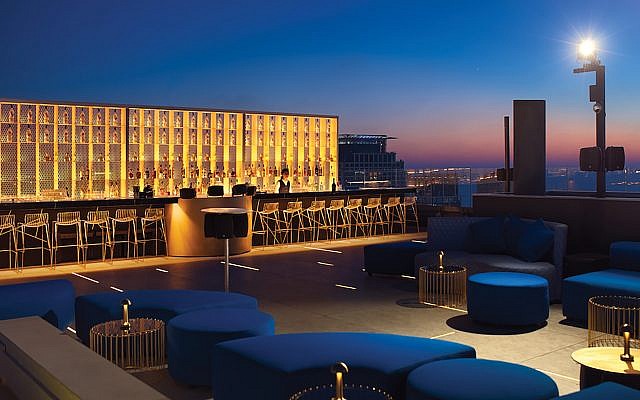 Anyone who has spent time in Tel Aviv knows why it is known as the “White City.” Pale stucco buildings shimmer under the Mideastern sun; modernist angles and oversized shapes form an arresting counterpart to the narrow, ancient lanes of Mediterranean Israel.

Much of Tel Aviv’s architectural DNA comes from the Bauhaus, an early 20th-century German style imported by Jewish architects fleeing the Nazis. This year marks the 100th anniversary of that aesthetic movement; to mark the occasion, the White City Center, a museum and conservation space, will open in a historic building just steps from the Bauhaus Museum.

The White City Center is part of a wave of architecturally significant places — some restored, others brand new — cementing Tel Aviv’s status as the Israeli style capital. Whether you love or hate the boxy Bauhaus look, its centennial is a good opportunity to check out Tel Aviv’s significant buildings, past and present.

Bialik Square is Bauhaus central; the entire plaza, with a lily pond at its center, has been designated a UNESCO World Cultural Heritage Site. On the surrounding lanes, elegant villas are tucked into greenery behind stucco walls, giving the area an exclusive feel removed from the grit and graffiti farther south. 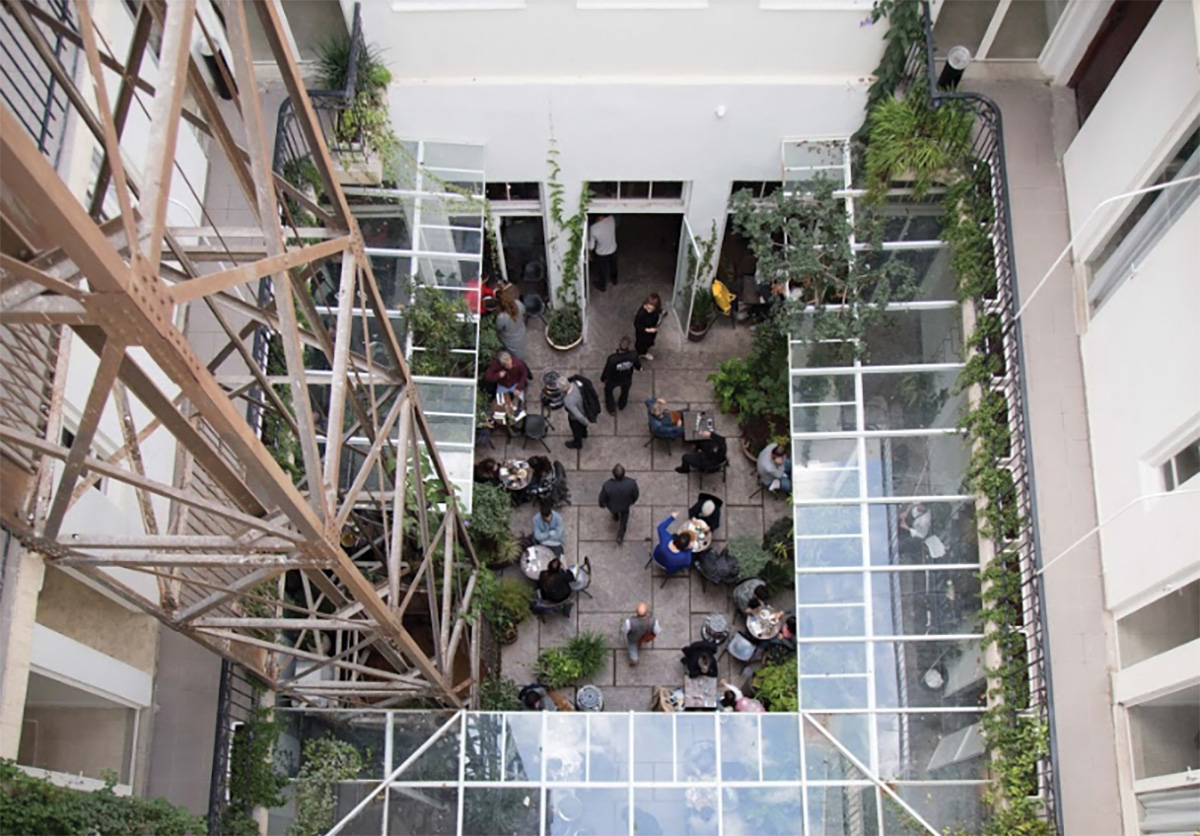 The courtyard at the trendy Herzl16.

On the Square itself is Beit Ha’ir, the historic town hall, now a public cultural center, whose massive white façade hints at both Art Deco and Greek Revivalism. Next door, tall palms echo the verticality of the Bialik House; the home-turned-museum of Israel’s national poet, Hayyim Bialik, boasts elongated arches crowned by a tower.

The Bauhaus Museum itself is modest by comparison — a severe, even minimalist white building across the plaza. Its spiritual “white” cousin is the nearby 1936 Max-Liebling House, designed by architect Dov Karmi with the squared-off carapace and recessed balconies of the Internationalist style; this September, it will re-open as the White City Center.

A few blocks away, a 1972 Brutalist building rises 16 floors over the surrounding cityscape, casting angular shadows along the waterfront. This is the famed Migdalor (“lighthouse”) Building, a postwar landmark that had fallen into neglect before a recent restoration.

Its jewel, and the reason to visit, is the new Lighthouse Hotel, one of the latest boutique offerings from the Brown Hotel group. You may or not be a fan of Brutalist exteriors, but it’s hard to the deny the architectural effectiveness from inside. The Sky Bar, a rooftop lounge, offers a 360-degree panorama of downtown — the Migdalor sits at the corner of Ben Yehuda and Allenby Streets — and sweeping views over the shimmering Mediterranean, a stone’s throw away.

A few minutes’ walk south into Tel Aviv’s financial district, several buildings preserve the Internationalist spirit of one of Israel’s greatest architects, Yehuda Magidovitch. The 1926 Great Synagogue on Allenby Street looks like Lincoln Center on steroids; its façade is an imposing cage of modernist columns.

Around the corner on Rothschild Boulevard, the so-called Russian Embassy House is more residential in feel, having been built for the influential Levin family — but it’s only slightly more modest,  with its oversized scale and pagoda tower. Having served variously as Sotheby’s Tel Aviv auction showroom and the Soviet Union mission, the structure now houses the HESEG scholarship foundation.

A few blocks away, follow the cool kids to one of Tel Aviv’s most happening venues: Disco Tokyo and Herzl 16, at the eponymous address. The hybrid restaurant, bar, and music space recently opened in a renovated Italianate courtyard, hosting live shows and cultural events. The building’s claim to fame is that it was the first in Tel Aviv to house an elevator; now its lure, besides the stylish crowd, is a multistory Italianate courtyard that combines modernist and Mediterranean aesthetics. 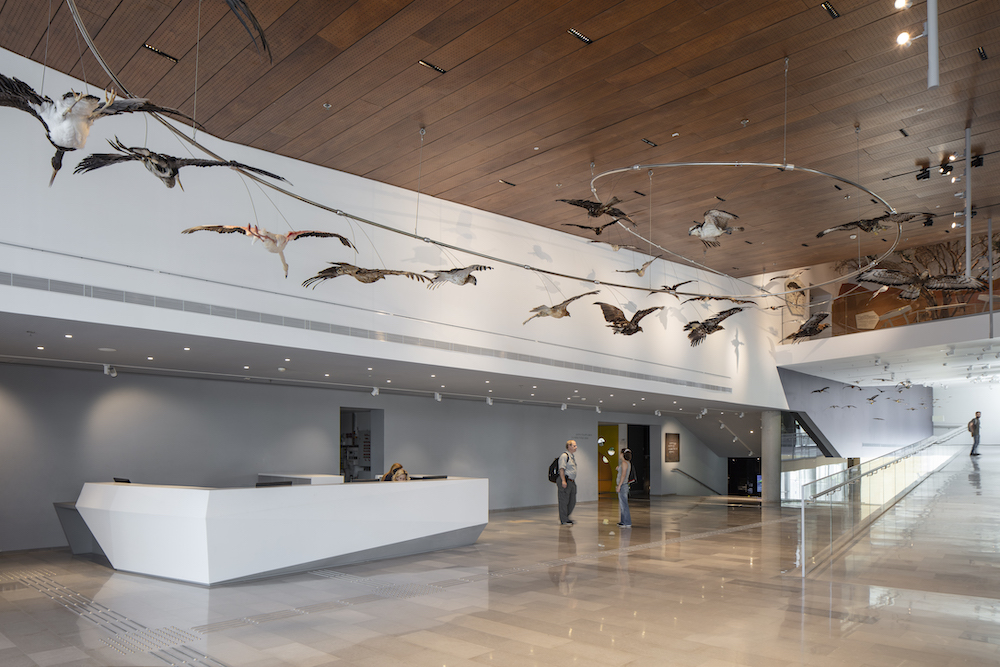 The Steinhardt Museum of Natural History in Tel Aviv. Courtesy

I have written previously about the collections on view at the Steinhardt Museum of Natural History, which opened in Northern Tel Aviv last September adjacent to the Tel Aviv University campus. But the building itself — by Kimmel Eshkolot Architects — is a destination for anyone interested in contemporary design.

The museum’s wooden panel shell, engineered to cutting-edge environmental standards, has been compared to Noah’s Ark not only for its treasure-chest-like form, but also for the staggering diversity of its contents — more than 5.5 million specimens! Inside, visitors explore via ramps, creating a continuous flow and eliminating the need to climb stairs; it’s a subtle but meaningful innovation in large-scale design.

Exterior balconies look out over the university’s botanical gardens, providing another link both physical and metaphorical — between the organic material within, and the natural world outside.