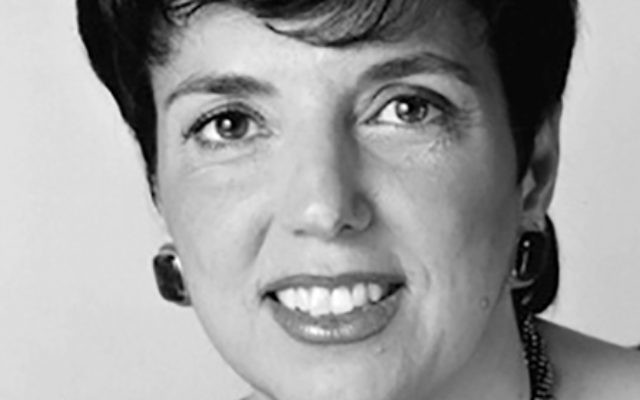 ‘You’re lucky,” quipped Angelika Schindler, founder of the Stumbling Stone Committee in Baden-Baden. “Usually we have the Stumbling Stone Ceremony in October or November, closer to Kristallnacht.”  But this year, 11 new stones, commemorating Nazi victims, were being laid on Sept. 9.

I didn’t feel so lucky. After hiking in the nearby Black Forest for several days, I was ready to relax in the town’s famed Caracalla Thermal Baths to complete my vacation in Germany. But Schindler’s invitation was intriguing.

As I arrived at the first installation, a worker tore up the pavement with a jackhammer. With an Australian outback hat, gold stud earring, and loose-fitting denim shirt, he seemed funky for a municipal employee. The other two with him wore uniforms and fluorescent orange safety vests. “The precision, the care he gives to each stone. He’s the artist,” my sister observed.

He was Gunter Demnig, the German artist who created the stumbling stone in 1995 to memorialize individual victims of Nazi oppression at their last known residence. A small brass plate etched with dates of birth date, deportation and death is fastened atop a small cobblestone, which is embedded in the pavement in front of the victim’s home. To date, 54,000 have been installed, nearly all by Demnig, throughout Germany and other European countries.

Our day began in the hills, outside the former residence of Gertrud Katz, an expansive Alsatian-style home, surrounded by perfectly maintained grounds and a decorative wrought iron fence. Katz, a Jew who had converted to Protestantism, was removed from here in 1944 and deported to Theresienstadt.

After Demnig finished placing the stumbling stone, Katz’s granddaughter spoke. As she recalled her grandmother’s deportation, the Protestant City Church bells rang out, as requested by the Stumbling Stone Committee. The ceremony ended, as all do, with the placement of a rose on the stone.

Today, there are 142 stumbling stones in Baden-Baden. Most are for Jewish victims, including those who had converted but were still defined as Jews by the Nazis. Also included are 12 who were “euthanized,” three persecuted for their political beliefs, and one Jehovah’s Witness.

The victims lived in every neighborhood and worked in nearly every vocation. Whether they were shopkeepers, musicians, hotel owners, servants, seamstresses or housewives, all had been part of the town’s pulse. Their forcible removal from Baden-Baden was akin to a vein being pulled out of a body.

“Almost everybody had a neighbor who suddenly disappeared. So those who say they have heard nothing of this terror are not credible,” Dagman Rumpf, director of Baden-Baden’s archive and a stumbling stone volunteer, told me.

Later, a stone was laid for Friedrich Gross, a member of the Nazi-banned Social Democratic Party who was sent to Dachau and later died in Mauthausen. Just before the ceremony began, an agitated homeowner emerged from Gross’s former home. His scowls, angry tone and gestures needed no translation.

“How do you know Jews lived here? No Jews ever lived here,” he screamed. Schindler answered that Friedrich Gross wasn’t Jewish.  Undeterred, the owner continued: “The stone might attract neo-Nazis who would come to protest. There was no need to remember this history. Didn’t they understand that this could decrease the property’s value?”

“It was sad that Gross’ family had to see that,” said Schindler.

Stones were placed that day for two euthanized victims of the Nazi’s T4 Project that deemed people with mental illnesses, physical and developmental disabilities, chronic psychiatric or neurological disorder, and those with any kind of condition seen as socially deviant such as chronic alcoholism as “life unworthy of life.” Culling the death records of psychiatric hospitals Rumpf has identified more than 120 euthanized victims from Baden-Baden.

Lily Reinbold, a seamstress, was one such victim. Her nephew Bernhard Reinbold delivered a eulogy that both confronted his family’s past and commemorated Lily’s life. All that remained of Lily, whom the family had never discussed, was an old prayer book with her birth date, one photo, and a Nazi death certificate stating she had died from tuberculosis. With psychiatric hospitals opening their records from the Nazi era, Bernhard was able to determine that Lily, suffering from chronic syphilis, had been euthanized.

For Bernhard his aunt’s stumbling stone meant there would be no more “taboos in his family.” He could give his aunt “her name back.” In addition to the rose, he placed Lily’s photo next to her stone.

Despite my initial hesitation I attended all 11 installations.    Stones are embedded high in the hills that ring this town and below in its commercial center. They’ve been placed in front of grand historic homes, modest apartment buildings, on busy streets, and side streets. One was in a vacant lot not far from my hotel.

My attention initially had focused on the individuals being commemorated. I tried to imagine their appearance, work, and the day of their arrest or deportation. Yet as I traveled throughout the town, I realized that just as the stones are embedded in the pavement, these individuals had once been embedded in the life of Baden-Baden.

The 11 installations took close to four hours. But the ceremonies followed 12 months of work by a committee of seven volunteers, all women and all non-Jews.

They begin with identifying those who will be honored. They track down a relative who can deliver the eulogy in person or forward it to the committee. When a relative can’t be found, this task is assumed by a volunteer. In either case, extensive research is required.

The women raise the 120 Euros for each stone. They set a date, notify homeowners and town authorities, and the surface of each site needs to be inspected, to determine if special equipment is required. Sometimes, streets and homes no longer exist. “So we must take out old maps and make the best decision,” volunteer Ursula Hocker said.

“By December we are exhausted,” Rumpf notes. “We take a rest and then we start all over again.”

Charlotte Bonelli is director of AJC Archives and author of “Exit Berlin: How One Woman Saved Her Family from Nazi Germany.”