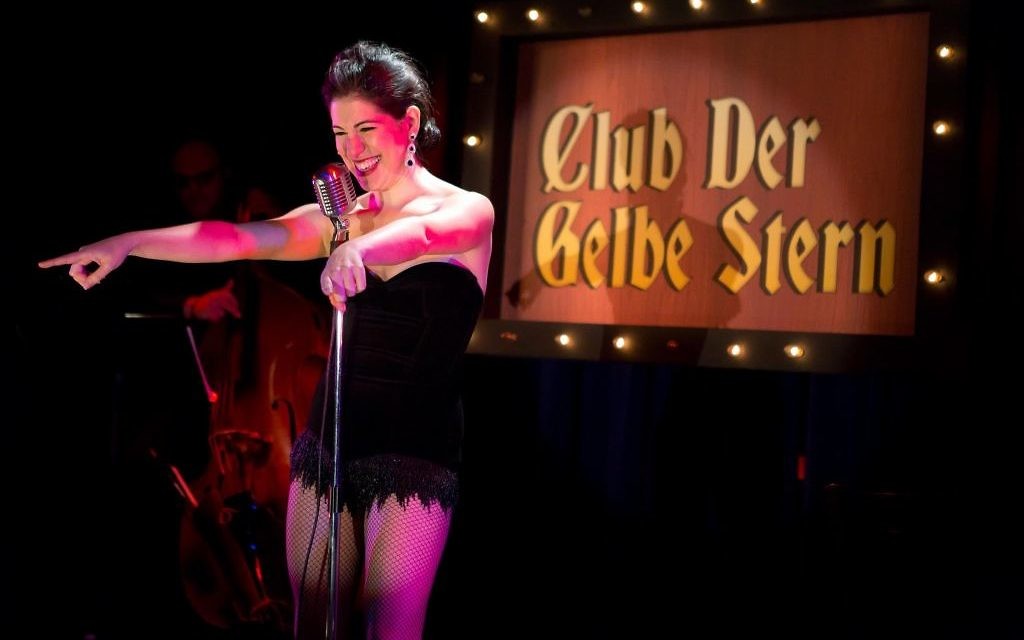 Amidst the clink of cutlery and the gentle murmur of strangers cheerfully bumping elbows in the Laurie Beechman Theatre on 42nd Street, a striking woman rushes in, checks her face in the mirror—a little bruised, but still strong—and then brazenly takes the stage.

Her name is Alexis Fishman, an Australian-born actress currently living in America, and this is her creation: Club Gelbe Stern, a cabaret on the brink in Berlin; herself the chanteuse Erika Stern—a fearless Jewish provocateur, trying to keep her little world together.

Using German, British and American cabaret music of the 1920’s and 30’s, this musical in one-act has been played to sold out audiences in Sydney and New York, including at last year’s New York Musical Theatre Festival (NYMF), where Fishman was awarded Outstanding Individual Performance at the festival’s excellence awards.

Now, for three nights only, Club Gelbe Stern returns to 42nd Street, and The Jewish Week caught up with its creator Alexis Fishman for a glimpse behind the greasepaint.

JW: How did you come to write this musical? What was the impetus behind it?

I’m the granddaughter of Holocaust survivors: both my mother’s and father’s family were affected by the war. As a child I learnt a great deal about the Holocaust, and as I grew older I felt an increasing desire to really try and understand what they went through. This show is my attempt to do that, to bring myself as close as possible to their experience. If I was living in Berlin in 1933, I might have been doing exactly what my lead character Erika Stern does. It was my way to trying to put myself in my grandparents shoes.

I had been harboring the idea for quite a while and mentioned it to friends in Australia, David and Lisa Campbell, who at the time were running the Adelaide International Cabaret Festival. A little while later I sat down with Lisa for coffee and without me even asking she said the show had been programmed at the upcoming festival. At that point, it had to be written! Nothing like a deadline to get you moving!

JW: How has the New York reception been thus far?

The reception has been great. Both audience members and the press have been overwhelmingly positive. I’ve had people approach me afterwards, descendants of Holocaust survivors, who were moved to tears. I’ve also had a woman try to set me up with her son. When I politely declined she said “Well, I have two, what about the other one?”

What is gratifying for me is that the show has been through many versions; it’s been constantly reworked since it debuted in Australia. Through the help of many, many wise people, I think we really have something that touches people and gets them thinking.

JW: Do you have a favorite part of the evening?

I enjoy a lot of it, but one of my favorite part is the interaction with the audience, the ad-libbing. I know Erika Stern so well that I’m confident in just allowing my mouth to run off sometimes! And audiences really love it too.

The ending is also particularly memorable to me. When I sing the final number…the story hits me so hard there. It’s really enjoyable to play and offer that to the audience.

JW: What's in the future for Club Gelbe Stern?

I’m happy to be able to revive Club Gelbe Stern for a limited run here in New York, and would love to bring it on tour. It would also be great to take it back to Australia, since it is markedly different from what was presented there a few years ago. I also have more plans for future development, but that’s not something I can talk about yet!

Emily C.A. Snyder is an internationally published and produced playwright, classical stage director, and the Artistic Director of Turn to Flesh Productions. Her original five-act iambic pentameter play, Cupid and Psyche, premiered at The Barrow Group Theatre for Valentine's 2014.