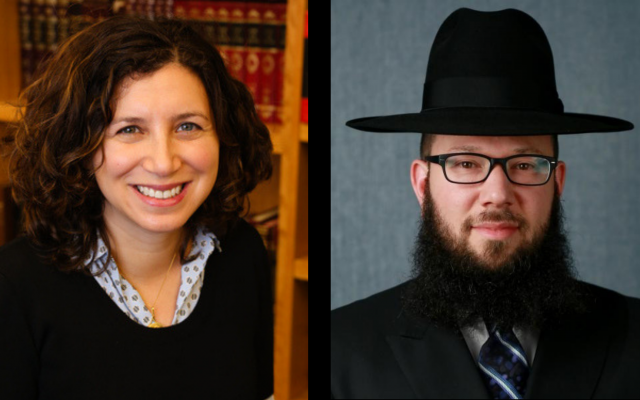 The patriarchy begins in response to human beings’ primal sin. Eve is told that because she ate (and fed her husband) from the Tree of Knowledge, he will now rule over her. (Genesis 3:16) Presumably prior to the sin, Eve and Adam were equal partners, each of them an ezer kenegdo, a helpful counterpoint to each other.

In Bavli Eruvin 54a, Rav Acha bar Yakov suggests that the word, חרות or engraved, which is used to describe the Tablets of the Law in Exodus 32:16 can also be read as חרות, meaning freedom. Rabbi Avraham Schorr, in his work Halekach v’Halebuv (Parshat Shekalim), takes this idea further and suggests that when Israel accepted the Torah at Sinai, they became free from the pall of humans’ original sin and they were restored to an Edenic state. Death was vanquished and God’s immediate presence could once again be felt by humans. When shortly afterwards Israel commits the sin of the golden calf, they are again catapulted back into a world of transgression, impurity and gender inequality.

Purim is identified by the Rabbis of the Talmud as a second Sinai. On Purim, the Jewish people accepted the Torah and God’s covenant anew (Bavli Shabbat 88a). If the original Sinai restored Israel to an Eden-like state, Purim as a Sinai redux should also hold hints of the original spiritual Eden experience.

At first the story of the Purim seems, if anything, to be the opposite of spiritual.  The Book of Esther begins with a party that is all about indulgence and excess. There are descriptions of lavish furnishings, abundant wine, and a culture of כי כן יסד המלך לעשות כרצון איש ואיש. Every man’s desires were to be fulfilled, at the order of the king. After 187 days of hedony, the party abruptly grinds to a halt when Vashti says no.

In a patriarchal system where the men in power assume their right of access to everything, Vashti’s refusal to obey the king is unthinkable.

She must be removed immediately, as Memuchan advises, and missives affirming men’s complete domination over women must be at once distributed throughout the empire. (Memuchan is identified as Haman in Bavli Megillah 12b.) A short while later, another person in the Megillah dares to say no. This time it is a man, Mordechai, who refuses to bow to Haman. As Haman himself admits to his entourage (Esther 5:11-13), he has riches and power and status beyond anyone’s dreams. Yet, none of it matters to Haman as long as Mordechai refuses to acquiesce to his domination.

The Rabbis of the Talmud connect Haman with the sin of the Tree of Knowledge (Bavli Chullin 139b). Adam and Eve had access to all trees except the Tree of Knowledge. Haman had power over all of  King Achashverosh’s subjects, except Mordechai. The inability to accept any limits unites the two stories. It is against the backdrop of this unrelenting push to power that Esther finds her voice.

When we are first introduced to Esther in Chapter 2, she is docile and obedient. She goes where she is taken (Esther 2:8,16); she obeys her guardian Mordechai’s every command (Esther 2:10,20); she asks for nothing of her own, only accepting whatever is given to her (Esther 2:15).

She is the ideal woman of the patriarchy, a blank canvas onto whom powerful men can project their desires (Bavli Megillah 13a).

In chapter 4, Esther realizes that it is up to her to save her people. She springs into action, rejecting Mordechai’s naive assumption that pleading with the king could be effective if Haman is still in his sphere of influence. Esther orchestrates a master plan, stoking Haman’s arrogance and the king’s jealousy until she has brought about a fundamental shift in power. She commands Mordechai (4:17) and this time it is he who obeys her instructions.

Esther does not dismantle the patriarchy. At the end of the book, the king is still sovereign and Mordechai is his second-in-command. Esther does get to write her own story, a relatively rare occurrence in the Hebrew Bible.

Esther’s power suggests a movement back towards a prelapsarian state in which men and women coexist equally and God interacts with humans freely and in a state of grace.

Throughout the Jewish calendar we are invited to focus on specific aspects of daily living which can elevate our spiritual practice. In the Rama’s gloss on Shulchan Aruch, Orach Chaim 696:8, he explains that celebrating Purim often involved gender bending. Men wore women’s clothing and women donned male garb. By dressing up in this manner we are encouraged to think more flexibly about the interplay of gender and power in our lives. For a day we imagine being other then we are, and this allows us to envision the possibility of a differently ordered society.

On Purim, we strive to attain the spiritual clarity of עד דלא ידע, when we no longer limit the spectrum of preoccupation to the rise and fall of male leadership.

We encourage everyone to experience Purim as an exercise of expanded equality in Jewish life.

Via a temporary return to Eden, we can create a more equitable model for the rest of the year.