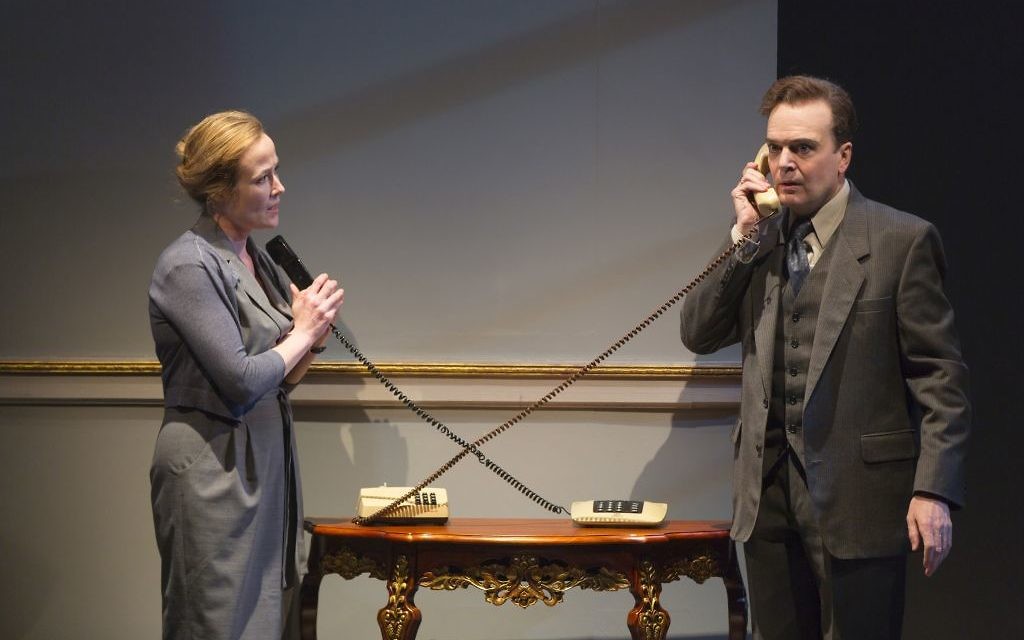 Some of the most important events in our lives happen behind our backs. While violence between the Israelis and Palestinians continues to make headlines, diplomats have said that any negotiations that have a chance of success must be conducted in secret. This is the lesson of the Oslo Accords of the 1990s, which set a framework for peace negotiations between the Israelis and the PLO. J.T. Rogers’ suspenseful, cleverly written new play, “Oslo,” which opened last week at the Mitzi E. Newhouse Theater at Lincoln Center, tells how a pair of married Norwegian diplomats contrived, against the odds, to bring representatives of the two sides together to make historic concessions that led, ultimately to the first agreement between Israel and the Palestine Liberation Organization.

Directed by Bartlett Sher (“Fiddler on the Roof” and “The King and I”), “Oslo” focuses on Mona Juul (Jennifer Ehle) and Terje Rod-Larsen (Jefferson Mays), the Norwegian envoys who, after living in Cairo and touring the Middle East, ended up facilitating the talks after being approached by the PLO. Without telling Mona’s boss, Norway’s Minister of Foreign Affairs Johan Jorgen Holst (T. Ryder Smith), the couple open up a back channel between the Israeli and Palestinian negotiators, which lead to initial meetings at a Norwegian castle between Yair Hirschfeld (Daniel Oreskes), a professor of economics at the University of Haifa, and Ahmed Qurie (Anthony Azizi), the finance minister for the PLO (which was then in exile in Tunis), along with their respective subordinates, Ron Pundak (Daniel Jenkins) and Hassan Asfour (Dariush Kashani).

But the negotiations kick into high gear only when the Israelis grudgingly send in their A team—Uri Savir (Michael Aronov), the swaggering director-general of the Foreign Ministry, and imperturbable Joel Singer (Joseph Siravo), the legal expert for the ministry who practices law in Washington, D.C. Through all their bluster and braggadocio, their trading of insult and invective, and their constant need to one-up each other and claim the higher moral position, the men stumble their way to a truer understanding of what each other needs to make the process work. The periodic outbreak of horrific violence between the Israelis and Palestinians is shown through projections of photos, emphasizing what is at stake in the negotiations.

“Between our people lies a vast ocean; let us be the first to cross and stand upon the other shore.”

Rogers, who is based in Brooklyn, is a prolific playwright best known for “Madagascar,” a prize-winning play about three Americans who each find themselves, at different times, in the same hotel room in Rome. He has a wonderful facility for writing dialogue; the characters in “Oslo” are credible and heart-stirring, as they contemplate the chasm between them. As Qurei says at one point, “Between our people lies a vast ocean; let us be the first to cross and stand upon the other shore.” When Savir and Qurie discover that they each have a daughter named Maya, they bond in an unexpected and moving way.

Sher, who directs the play in a straight-forward and lucid way, is helped by a talented and quite large cast (a couple of whose members double in different roles) which does a creditable job with both the Norwegian and Israeli accents (although Daniel Oreskes’ Shimon Peres made me long for Jackie Mason’s more spot-on rendition of the former prime minister’s distinctively slow and sonorous voice). In any case, though, “Oslo” is more focused on plot than character. Mays, who has starred on Broadway in “I Am My Own Wife” and “A Gentleman’s Guide to Love and Murder,” has little scope for his chameleon-like abilities as the husband and envoy, since his mild-mannered character is constantly required to take a back seat to the real action that is taking place between the Israelis and the Palestinians; the Norwegians may have facilitated the meetings, but they are not the intermediaries, and are not privy to the official discussions.

In a sense, the audience is put in the same position, as so many of the negotiations take place off-stage; we must wait for the doors to open to find out if progress has been made. It is the boundary between the negotiating room and dining room (where the characters are supposed to socialize and develop personal ties, but not discuss business) that is breached during the course of the play, as the characters’ enmities spill out and cry out for resolution that is not just political in nature but emotional as well. When the Oslo Accords are finally signed by Yasir Arafat and Yitzchak Rabin at the White House in 1993, the play reaches its jubilant climax.

In putting the spotlight on a brief period of time in which mutual recognition and even respect were possible, the entertaining and thought-provoking play comes as a much-needed reminder of the potential for peace in the Middle East.

Nevertheless, while “Oslo” has a three-hour running time, it still feels incomplete in terms of providing the political background for the play. The negotiations seem to be taking place in somewhat of a vacuum; the geopolitical context is not always clear. As the real Uri Savir has written in his 1999 book on Oslo, “The Process: 1,100 Days That Changed the Middle East,” it was the break-up of the Soviet Union, the rise of Iran as a regional superpower, and the growth of religious fundamentalism throughout the Arab world that helped to turn the Israeli-Palestinian Conflict into such a powder keg.

The real pathos — or even tragedy — of “Oslo” is how ultimately unsuccessful the accords were, and how they led to the assassination of Rabin, who was killed, during a celebration of the accords, by a radical Israeli, Yigal Amir, who opposed them. But in putting the spotlight on a brief period of time in which mutual recognition and even respect were possible, the entertaining and thought-provoking play comes as a much-needed reminder of the potential for peace in the Middle East.