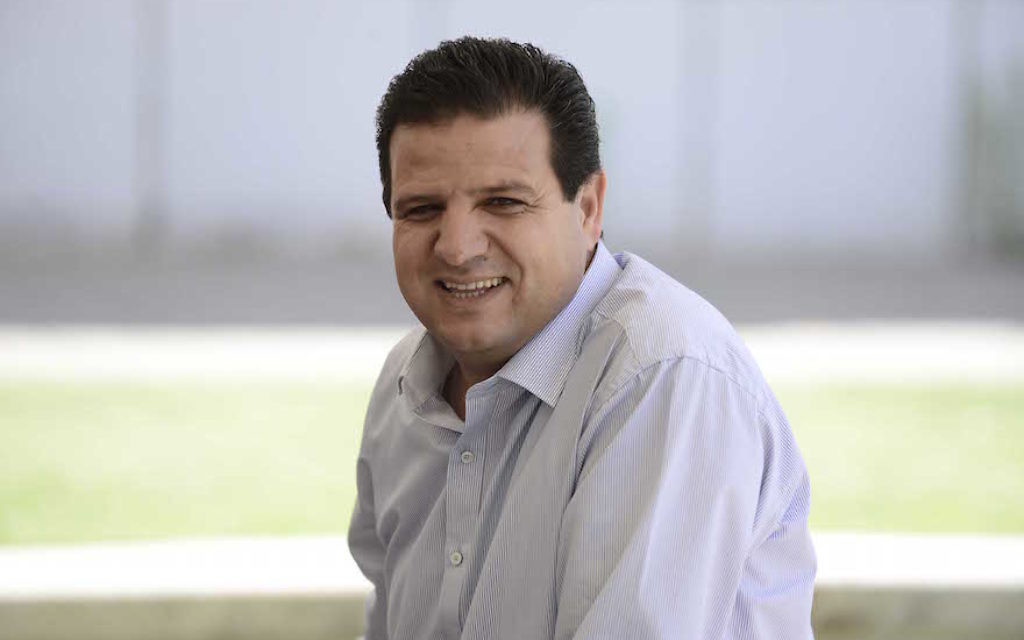 Washington – Ayman Odeh travels the land of his heroes, Martin Luther King Jr. and Malcolm X, but prefers to deliver paeans to their inspiration not in their native English, but in Hebrew and Arabic.

Meeting me here last week in the cafeteria of the Rayburn Building on Capitol Hill, where he has just completed a meeting with another civil rights-era hero, Rep. John Lewis, D-Ga., Odeh ventures gingerly into an interview in English until my pronunciation of an Israeli term gives me away.

“You speak Hebrew?” he asks. His eyes light up, and Hebrew guides us into the familiar zone all strangers seek — in this case, between a Jewish-Israeli and an Arab-Israeli, or as he prefers, an Arab citizen of Israel.

Odeh, 40, is more than just a citizen: He is the first Arab-Israeli to unite four parties into a single list, and his Joint List won 13 seats in the March elections, making it the third largest faction in the Knesset. Foreign Policy magazine named him one of this year’s top 100 global thinkers.

His message, like his affect, his embrace of Hebrew and Arabic, is one of outreach.

[But Odeh refused to meet Thursday with the Conference of Presidents of Major Jewish Organizations because the Jewish Agency and other Zionist groups share the Conference's Manhattan offices. In a statement, Stephen Greenberg, the group's chairman, and Malcolm Hoenlein, its executive vice chairman, noted that the meeting was scheduled after the organization received "several suggestions" that Odeh should be invited.

["We have had leaders of virtually every faction and party in the United States, Israel, from friendly and unfriendly countries, and none ever refused to appear," they said. "For a member of the Knesset to assert that he will not enter a premises because it has an association with Zionist entities, like the Jewish Agency, is disturbing and dismaying. Representatives of a broad spectrum of organizations came to hear him and were rightly upset by his decision not to appear, although he was in the building lobby. A Labor member of the Knesset, who was by chance visiting the Conference, tried to persuade him, but to no avail.

["We now understand the recent demand of the mayor of the Nazareth, Ali Salem, that Odeh leave his city because his presence promotes divisiveness. … The Conference will continue to provide an open forum but will not compromise our principles and yield to such an outrageous demand. We hope MK Odeh will reconsider his stance if he, indeed, wants to advance coexistence in Israel and promote understanding abroad. As a leader, he cannot succumb to the pressures of extremists in his constituency, but should take advantage of such opportunities to provide his perspective, and that of those he represents, to an important and interested audience."]

Odeh wants to bring Arabs and Jews together, and he is enervated by those who would divide them — Israeli Prime Minister Benjamin Netanyahu and, although he is careful in how he frames it, the movement to boycott, divest from and sanction Israel.

“The boycott must be against the occupation in the clearest way,” Odeh tells me, saying he prefers the narrower boycott of products from Israeli settlements. “With a clear agenda, which the end is the end of the occupation.”

That’s a pronounced distinction from the BDS movement’s stated goals, which embrace the “right of return” for the descendants of Palestinian refugees to Israel, a path Israelis believe leads not to two states, which Odeh favors, but a single binational one. He does favor a right of return to their ancestral villages for internally displaced Arab-Israelis.

But before he gets to policy, Odeh wants to get to know his countrymen, wherever they are. In the bustling, buzzy basement of a Capitol Hill office building in Washington, D.C., perhaps the most significant Arab-Israeli politician of this generation sets about making me feel like a landsman. Where are you from? Where is your family? How do you get away with not wearing a tie?

It’s the quintessential question for an Israeli male greeting another while traveling abroad. His staffers roll their eyes.

“He’s a journalist,” one says. “Not a visiting parliamentarian.” Odeh adjusts his tasteful burgundy tie and grimaces.

The schmoozing is replicated, multifold, an hour or so later as he heads into the Palestine Center across town.

“My people are from Haifa,” where Odeh was born and still lives, a shy young woman tells him, and he hugs her. Odeh started his political career straight out of obtaining a law degree in Romania, at 23, running for the Haifa municipal council. He is married to a physician and has three children.

He delivers his talk in Arabic – allowing for slight changes in emphasis, it is essentially the same pitch he delivered to me in Hebrew an hour or so earlier.

Odeh quotes extensively from his American inspirations and embraces the anger of the Palestinians, citing Malcolm X. But he believes the best path to equality is through working together with Jews, referencing King.

In this setting at the Palestine Center, an advocacy group for the Palestinian cause, he is slightly more deferential to the BDS movement, but gets to the same point: Narrow the scope to the occupation.

“I’d like to salute the people who are working on BDS because it puts Israel on the spot in world public opinion,” he says, answering a question from an activist for Jewish Voice for Peace, a non-Zionist group that backs BDS. “This effort, the more it is focused on the central issue of occupation, then it is going in the right direction.”

Notably, he had to be reminded to answer the question on his BDS position, which was included among several proffered to him at once, and when he gets around to it he speaks of BDC, not BDS, until a host’s whisper corrects him. Pressed further by the audience, Odeh finally betrays a flash of anger, wondering at outsiders who would prescribe his politics.

“I tell people who try to tell us to boycott other things, I say, ‘We understand our situation well,’” he says.

My questioning earlier about the particulars of the movement similarly seems to annoy him. I tell him it’s likely to be on the agenda when he meets leaders of U.S. Jewish groups in New York, but he waves away the questions, saying he is unfamiliar with the instances of BDS movement targeting I mention, including SodaStream seltzer machines and Sabra hummus.

Odeh does not deemphasize his Palestinian identity, but wraps it into a broader identity that he wishes his interlocutors would understand is more nuanced and complex.

“We are not just a national minority, we are also natives, and the country that we are citizens of is occupying the people we belong to nationally,” he tells me, repeating the same locution to the Palestine Center crowd. “To give a true answer, we must see the complexity of the issue.”

He does not like the name “the Joint Arab List,” the term sometimes used to describe his faction in the Israeli media. The party he leads, Hadash, the one-time Communist list, has historically had Jewish and Arab members.

To me and at the Palestine Center, Odeh praises the late Israeli Prime Minister Yitzhak Rabin, quoting Rabin’s assassin, Yigal Amir, as saying that the primary reason he killed him was because he relied on the votes of Arab Knesset members.

“The strength of Rabin is that he saw in citizenship such a value, he allowed himself to rely on Arab voters,” Odeh tells me, and he repeats something close to it later. “Rabin started taking them out of the cycle of marginalization.”

It’s telling: With an Israeli Jew, it’s safe to assume a shared affection for Rabin. That’s not the case among pro-Palestinian advocates.

It’s an expression of shared citizenship and history he wishes were reciprocated among Jewish-Israeli leaders. He rattles off annual Israeli confabs that focus on security, on Jewish identity, on economic equality, and he identifies one lacking: a conference that would advance a civil society that embraces all of Israel’s citizens. He plans a march next year from Nazareth to Jerusalem that would celebrate the value of citizenship, and hopes to launch an annual conference on the topic in Haifa.

Odeh is not sensing a love of civil society from the current Israeli leadership, noting Netanyahu’s now notorious appeal to Likud voters on Election Day scaring up an image of “hordes of Arabs” heading to the polls. Scooting past the U.S. Supreme Court in a cab, he mutters “huh, no earth movers,” and then explains his reference to Moti Yogev, the Jewish Home member of Knesset who recently joked that he’d like to upend the Israeli High Court of Justice with bulldozer-like machines.

He does not spare the Zionist left, decrying its talk of the necessity of preserving a Jewish majority.

“If I am part of the demographic problem, when will my turn come?” Odeh says at the Palestine Center.

In his week here, Odeh meets with Congress members, including Lewis and Rep. Keith Ellison, D-Minn., the first Muslim elected to Congress, with senior Obama administration officials at the White House and State Department, and with Jewish officials, although his staff won’t tell me which Jewish leaders — apparently his interlocutors are sensitive about the meeting. There were also meetings here and in New York with Arab-American groups and leaders of progressive think tanks.

What’s his message for American Jews? Odeh hearkens back to the era of King and Malcolm X.

“I call on them the way they stood on the right side in the 1960s, to stand with us now,” he says. “It will be added value for everyone.”