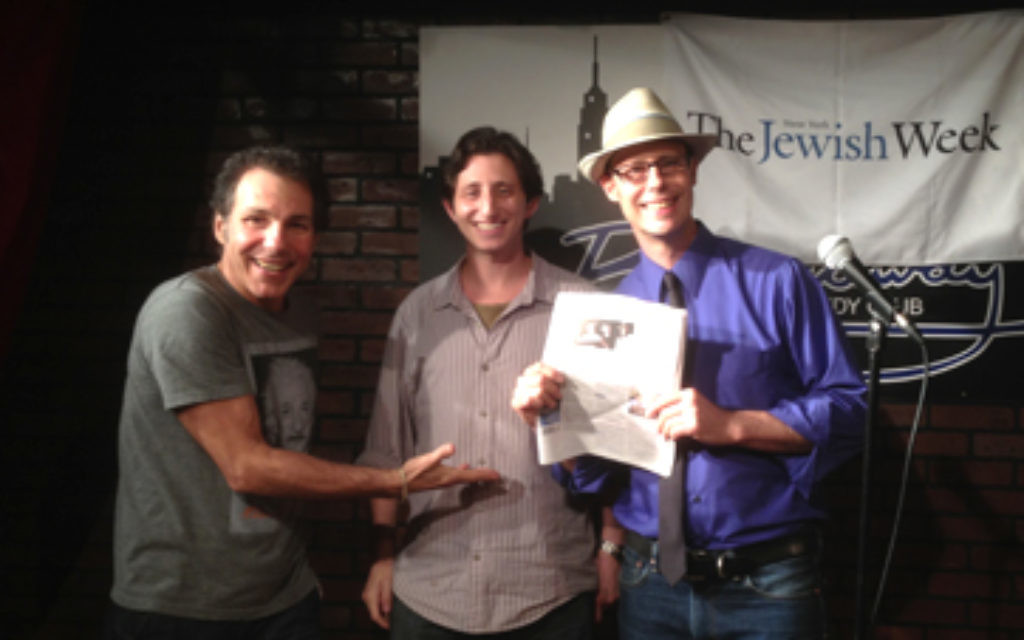 Should Jews be considered white? How would a Modern Orthodox woman teach students in the South Bronx about modesty? What would happen if Anthony Weiner ran for mayor of the Manhattan Mikvah?

Attorney Ronn Blitzer took the title with a fluid and funny set that dealt with race, marriage and fantasy. Jessica Schechter, 25, took second place with an energetic and adorable performance about teaching in the South Bronx.

Blitzer, a 30-year-old Upper West Sider, drew laughs when he talked about how he thought he might get into Yale because since he’s Jewish, he’s a minority. But Jews aren’t a minority, they’re white, a guidance counselor told him. One day, while wearing a T-shirt with Hebrew lettering, a Neo-Nazi yelled that minorities were destroying America — and pointed at him. If only the neo-Nazi was on the admission department for Yale, he thought.

Blitzer scored big when he spoke about being single on the Upper West Side.

Schechter, a teacher who lives on the Upper West Side, said her students wondered why she always wore skirts.

“They were like, ‘Ms. Schechter, you never wear pants. Is something wrong with your legs?’” she said in an accent. “They’re writing about modesty. It’s called ‘Cover Up or I Will Cut You.’”

The diminutive comedian, who studies directing at the Actors Studio at Pace University, joked that walking to shul and suddenly cutting away to change into heels could look like a drug deal.

Two 21-year-old contestants started strongly, and though they didn’t have the polish of Blitzer or Schechter, they provided memorable moments.

Mark Rapaport of Manhattan called himself to the Torah in Hebrew and then joked about Anthony Weiner losing a battle to be mayor of the Manhattan Mikvah.

“Unfortunately he (Weiner) was banned for trying to bring his iPhone into the Shvitzing Room,” Rapaport said.

Eric Weil, a senior at Boston University, channeled some Vince Vaughn-like humor, describing how he’d proposition a Manhattan girl even though he lives in New Jersey.

“Oh so you want to come hang out at my place a little bit,” he began. “Oh it’s not too far. We’ve just gotta walk to the subway, get on the A train to Penn Station for the 12:34 going to Trenton, transfer at Secaucus, get on the main Bergen line … call my sister when we’re close. She’ll pick us up in my mom’s Subaru. We can make out in my parents’ basement till they come downstairs or you come to your senses, you know, whichever comes first.”

Rabbi Bob Alper, 68 did a spot while the judges deliberated. His best line was that the next Harrison Ford action flick will be “Indiana Jones and The Last Prostate.”

The show was hosted by comedian Steve Marshall. The judges were David Goldman, artist representative and developer of shows with Mark Burnett, Magic Johnson and Paula Abdul; actress and image consultant Gloria Nadel; and Kenny Gluck, comedian and producer of “Kosher Komedy,” which brings Jewish comedians to venues across the country.

“Ronn’s humor hit the nerve of the audience,” Goldman said. “The fluidity of his delivery was extremely impressive. With Jessica, going out there and doing the accents was spectacular. One of her biggest strengths is her likeability.”

Gluck said he was impressed by the top two performers.

“Ronn was the whole package,” he said. “He put it all together, looked very comfortable and his timing was right on. Jessica was energetic and she connected very well with the audience.”

The 11 comedians advanced through three preliminary rounds and vied for paid spots and cash prizes.

Kole, who has produced the show for the last 12 years, said he predicts the top two will have bright comedic futures. Blitzer said he got pumped for the show and knew it was time to get real.

“I was in it to win it but my main goal was to have a good set,” said Blitzer, who added that he doesn’t joke while he’s in court.

Blitzer will perform at the premiere of “When Comedy went To School” on July 31 at the JCC in Manhattan, a prize for winning the contest.

Alan Zeitlin writes for NY Blueprint, which is part of The Jewish Week Media Group.