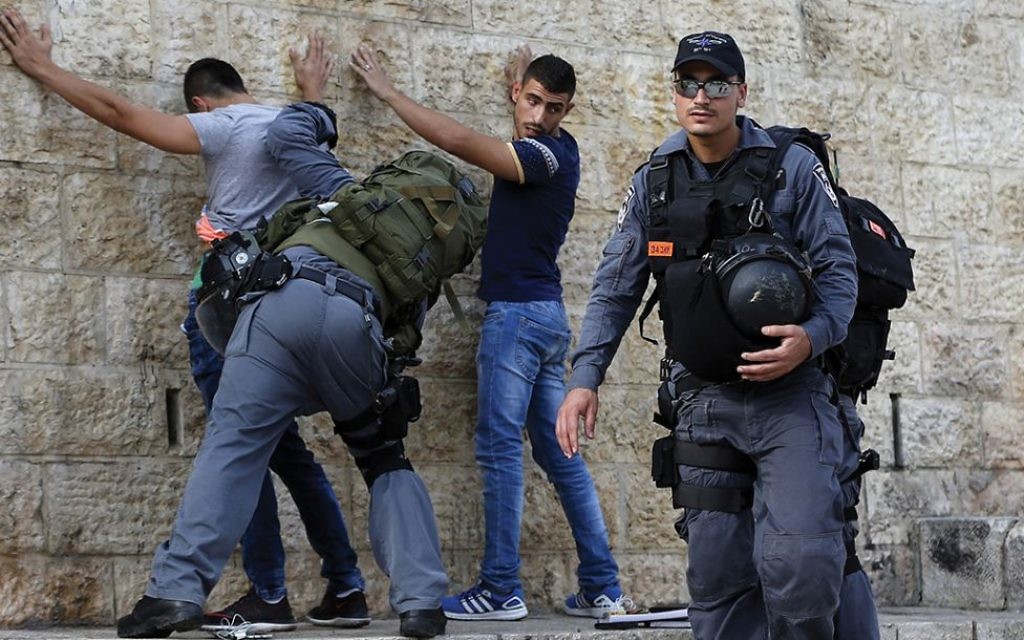 Tel Aviv — A wave of terrorist stabbings has left Israeli Jews feeling vulnerable, the way they did in the days of the Palestinian uprising: they’re buying pepper spray, arming themselves with rolling pins, taking self-defense classes, and escorting their children to class.

But the violence has also spurred fear and anxiety among the country’s one-fifth Arab minority and Jerusalem’s Palestinians, who find themselves under constant suspicion of being a potential assailant by their anxious Jewish counterparts.

In Jerusalem, Palestinian residents say they have kept children home from school out of fear they might get involved in clashes with police, and they are avoiding going to areas of Jewish Jerusalem where they can be exposed to repeated security checks from police. There’s also fear of vigilante violence by citizens.

“If you walk on the street, they’ll say, ‘It’s an Arab,’” said Mohammed Atrash, a truck driver from the Palestinian neighborhood of Sur Baher. “I need to meet a lawyer on Jaffa Street tomorrow. I’m not going by myself. I’m going to get an Israeli friend to take me.”

Arab citizens of Israel say they are feeling the same sense of anxiety when they travel in predominantly Jewish areas. While outwardly religious Jews have been targeted for attacks in Jerusalem, Arab women who wear hijabs are often subjected to discrimination, said Faisel Mahajneh, a former bank manager who lives in Um El Fahm, a small city about 12 miles north of Tel Aviv.

“Think about what it would be like if a Jew was exposed to danger because they are wearing a yarmulke. This is what Arabs experience every day,” he said.

Israel’s Arab minority straddles the line between Palestinians in the territories and Jewish Israelis, walking a tightrope that becomes more tenuous in times of conflict.

It happened in 2000 at the outbreak of the second intifada as well as a year ago during the Gaza war: As Israeli-Palestinian violence escalates, the unrest spills over to roil communities of Israeli Arabs. There are demonstrations with Palestinian flags, isolated incidents of rock throwing, and occasionally Arabs with Israeli citizenship carrying out attacks. Israeli right-wing politicians like Avigdor Lieberman have called for a boycott of Palestinian merchants who participate in solidarity strikes.

Yoav Stern, a former commentator on the Israeli Arab community for Haaretz, said that the number of Arab citizens and residents involved in the attacks is significantly higher than in previous times of tension. The most recent was a Bedouin Arab who attacked Jewish passengers Sunday at Beersheva’s central train station. An IDF soldier was killed and 11 other passengers were injured.

“This has never happened before in this volume,” Stern said.

“Once you have an event like what happened in Beersheva, you think: this can happen tomorrow in Hadera,” he continued.

“It’s not crazy to think it could happen. So the people are nervous and they have a reason to be nervous; this is a situation in which people can get hurt very easily.”

The tension harkens back to the days of the second intifada, when Israeli Jews blamed Israeli Arabs for a wave of riots that swept northern Israel and which left about a dozen Arab citizens dead as well as one Jew. After that, Jews, either out of fear or desire to punish, stopped visiting Arab Israeli cities.

When Israeli Arabs demonstrated against the Gaza war last year, they were accused of supporting Hamas and being a fifth column. Then, as now, they feared speaking Arabic in Jewish neighborhoods and voicing their opinions.

“There is racism on the street,” said Mahajneh, who is an activist in a group — “Neighbors of Peace” — that has been holding Jewish-Arab coexistence demonstrations on main highway junctions in northern Israel in recent weeks to counteract the growing rift. “We feel that it is always escalating. It started years ago with discrimination, then it became blatant racism on the streets, and then it’s reached physical attacks.”

The rise in vigilantism inside Israel has become dangerous and tragic for Jews and Arabs alike. Last week, an Israeli Jew was stabbed because his attacker believed he was an Arab and was looking to take revenge for Palestinian attacks. One Jerusalem journalist wrote on her Facebook page about a group of soldiers who attacked a Palestinian she said was stealing cell phones, treating him as though he were a terrorist. And on Sunday evening, an Eritrean migrant was lynched during a terrorist attack in Beersheva because residents there thought he was an Arab.

“These days aren’t good for anything, definitely not for coexistence in Israel,” said Ronit Heyd, the deputy director at Shatil, the social action arm of the New Israel Fund. There is a feeling of fear on both sides: Jews from attacks by terrorists, Arabs for the feeling of being accused of being a terrorist.”

Amid the fear of attacks, Israeli municipalities are coming under pressure from residents to distance Arab construction and janitorial workers from elementary schools and kindergartens. In the Tel Aviv suburb of Givatayim, the mayor wrote a Facebook post that the municipality is considering replacing dozens of workers from east Jerusalem with Eritrean migrants.

“It’s my obligation to look after the residents of Givatayim and our children,” wrote Mayor Ron Kunik. “I know this is not politically correct.”

A handful of other municipalities have ordered Arab workers to work in the evening hours instead of during the day to reduce proximity to Jewish residents.

“Because of the security situation in the last month, there is a risk. And we shouldn’t take risks with regards to our children,” said Idit, a mother of three from Rehovot in an interview with Israel Radio. “They are the most vulnerable.”

The trend prompted Sikkuy, a nonprofit that promotes integration of Israeli Arabs into the mainstream, to send a letter of protest to the Israeli attorney general.

“The law forbids employers to fire workers based on their ethnicity or racial background. You can’t fire workers just because they are Arabs. You can’t injure their work conditions. It’s a violation of the basic law on human dignity. The law is very clear,” said Gili Rei, a project manager at Sikkuy.

Beyond the violation of employee rights, Rei argued that the separation of Arab workers from Jewish children sends a problematic long-term message to Israeli kids.

“Once the tension is down, what are the kids going to think: ‘They’re not an enemy any more?’” she said. “We can’t argue with fear, at the same time, we can’t let fear govern us. That’s why laws are created to be guiding lights at times of crisis.”