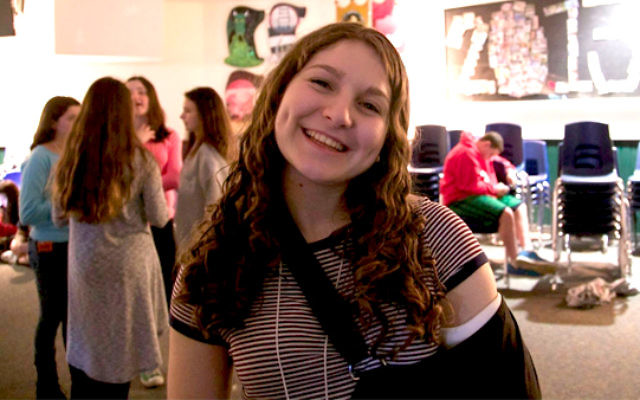 Editor's Note: This article was originally published in September 2015.

Seventy teens were brought to the edge of beautiful Lake Rolyn, which sits so peacefully on the camp grounds. We were Leadership Academy majors on the first day of URJ (Union For Reform Judaism) Kutz Camp in Warwick, N.Y. We were asked to find our own spot around the lake. Once seated and silent, we heard the words that would guide us through our journey this summer: Da lifnei mi attah omed, know before whom you stand.

At Kutz Camp, we discuss and practice this concept — we, as Reform leaders, are continuing in the footsteps of those who led before us. We emphasize that in no way will we brush off the footsteps of the past in order to make room for our own; instead, we preserve the mark that was made by those before us while building and pushing our communities further, creating our own imprints. We understand that in our lifetime, we may not see the changes to this world that we hope our work will bring, but we trust that by embodying this saying, future generations will continue where we left off, just as past generations trusted us.

“Think about the leaders before you who passed through this camp with the same purpose that you have today, and who looked at this lake as a source of inspiration, as a reminder of the generation who came before them, and the generation before that generation and so on,” said our group leader, standing by the lake. It was in that moment that so much became clear to me. Even though I now sit behind a desk at school, I can’t help but feel so grateful to have found the place where I was meant to be this summer. I knew that in the one-month span of Kutz Camp my small, close-knit community would expand not only across North America, but also across generations. As an expansive Jewish community, together, we could perform tikkun olam; together, we could repair the world.

Fast-forward 26 days. We returned to the lake on the last day of the Leadership Academy. Once again, we were told to find our own spot and to sit down quietly. And once again, we heard the words that had become so familiar to us over the course of the month: Da lifnei mi attah omed, know before whom you stand. We were given time to reflect on our summer and on the moments that highlighted this phrase’s significance.

The moment that came to my mind was the night we listened to campers and staff deliver TEDx-style talks. Topics ranged from organizations that educate people about blood cancer to summer camps for children from impoverished families; from discussions on audacious hospitality in our own lives to conversations about facilitating innovative worship in communities. By the end of the night, I was full of awe. Standing on the stage in front of us were my peers and my mentors, eager and ready to inspire those who were, quite literally, standing before them. They shared their messages with the generation they trusted to use leadership to make change, to create movements and to make those movements move. I felt privileged to witness the sparks of inspiration, motivation and persistence that culminated within one room on that one evening at the Kutz Camp.

But it wasn’t just in that moment that our Kutz community exemplified the phrase. Throughout the summer as we became more aware of the racism that still permeates our society; as we discussed and created initiatives to fight gun violence; as we collectively heard the announcement of the legalization of gay marriage; and as we spent four weeks in the presence of determined and eager leaders, the meaning and importance behind this saying felt almost tangible to me. I experienced its truth first-hand. Our generation is continuing the fight for equality for black Americans, one that past generations began in their battle against slavery and segregation. Our generation created our own movements, speaking out against the horrors of gun violence and the injustices against the LGBT community. In doing all of this, we are marking our own footsteps on the path to peace and equality, so that future generations can follow.

Da lifnei mi attah omed. Know before whom you stand. My month at Kutz camp taught me the impact and power behind this simple statement. We are not alone in repairing the world. We have an army behind us and an army ahead of us. We can do anything if we recognize that those who came before us laid a foundation. In the present we must take action and strive for greatness, and hope that those who come after us will continue our legacy.