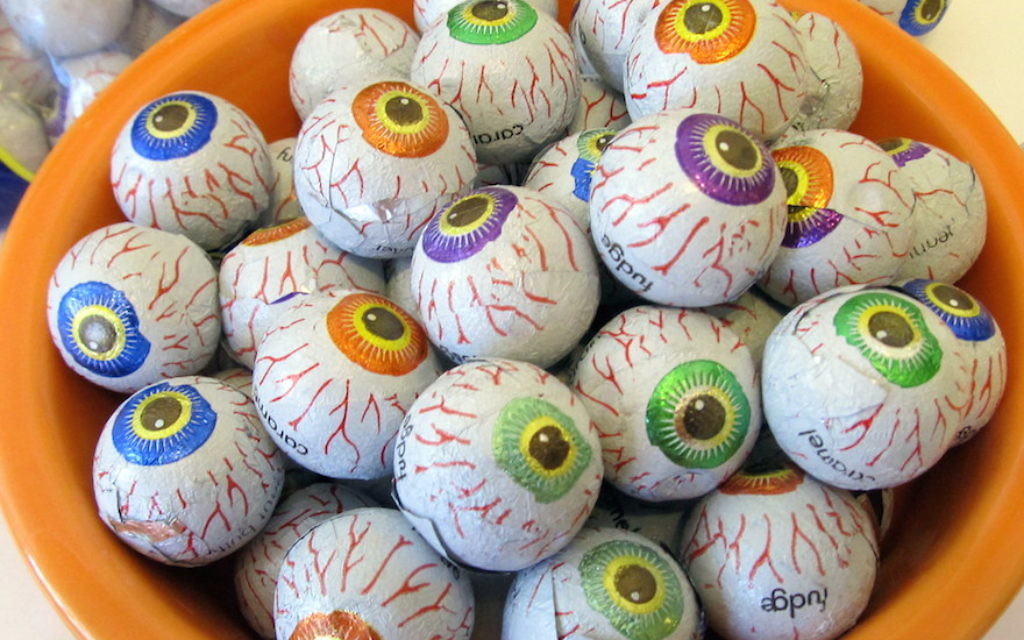 Los Angeles — This Saturday night, after waiting for three stars to become visible in the sky and observing Havdalah, the departing of Shabbat, with candle, wine and spice box, I will prepare to perform another ritual: I will pour gobs of candy into a large bowl to hand out to the sporadic stream of trick-or-treaters who will ring my doorbell.

Call me “orthodox” in my observance of this not-so-Jewish day, but this Halloween, I wanted to make certain that the treats we were handing out to the assorted ghosts, princesses and living dead who rang our bell were kosher.

Why? Kosher creatures are we, and I didn’t want anything unkosher — horror of horrors! — treifing up the house. I also wanted to show our undying (but not unhallowed) support for the companies that produce treats for the $2 billion Halloween candy market that were taking that extra step of making their products accessible to kosher consumers like me.

But during a late-night trip to the supermarket, I was surprised to find that there were almost too many hechshered treats from which to choose: M&M’s, Butterfingers, Dum Dums, Nestle Crunch, Baby Ruth and AirHeads all were kosher certified. Snickers, Three Musketeers, Twizzlers and even my favorite, Almond Joy (which my wife won’t eat because her dietary laws don’t include coconut. Pity; more for me.), were all deemed munchable by a higher source.

Not that I was kvetching, but I wondered: Why was so much of the Halloween candy kosher? After all, most Orthodox Jews, who do keep kosher, don’t celebrate Halloween. That’s because, according to an essay that appears on the Orthodox Union website, its origins are “a combination of Celtic, Roman and Christian holidays. All three are distinctly non-Jewish.”

For me, I see it more as an American holiday, one that I grew up with and enjoyed, and have chosen to integrate it into my Jewish life. But I was never sure if I was in the majority for doing that.

So why the kosher Halloween candy? Was there some religious shift of traditional Jews afoot unknown even to Pew? Were people who kept kosher quietly stocking up on low-priced Halloween candy for use on Hanukkah, or even Purim? Or was it an odd outcome of Halloween falling in the Jewish month of Cheshvan, sometimes called “mar [bitter] Cheshvan” because there are no Jewish holidays, and Jewish folks just needed something sweet to nosh on to keep up their spirits?

Still pondering this imponderable while studying the ingredients printed on a giant bag of Hot Tamales, I felt something staring at me. Looking slowly left, I found the culprit: a bag of candy called Creepy Peepers — round chocolates, each wrapped in a cartoonishly bloodshot eyeball foil wrapper. My own eyes widened as I realized they were kosher.

As I was to discover, all of the Halloween offerings produced by the R.M. Palmer Company of West Reading, Pennsylvania — from their fudge-filled “Mummy Munchies” to my favorite, “Dr. Scab’s Monster Lab Chocolate Body Parts,” a bag of fingers, ears, eyeballs and mouths — are kosher. (Better yet, the “body parts” are dairy.) In fact, Palmer’s entire line of chocolates, including Easter bunnies, are kosher.

From corresponding with the company’s marketing director, John Kerr, I learned that kosher certification is very common in the candy business. Palmer’s O.U. certification, which “requires additional inspections and standards for product quality,” provided “independent reassurance to consumers and retailers” that their “confections are high quality,” an email read.

I bought a bag, and after sampling a few eyeballs, I had to agree.

Speaking with Jorge Farber, the president and CEO of the company, I learned that Madelaine, based in Far Rockaway in the Queens borough of New York City, was established in 1949 by Holocaust survivors. Though gearing up for the busy holiday season, Madelaine was still recovering from Hurricane Sandy in 2012, which reportedly had destroyed its equipment and inventory.

After nearly closing in 2014, the company received $13.2 million in government recovery funds in January. At that time, only about a quarter of its peak season workforce of about 450 had been hired back. Today, as Madelaine brings its new equipment online, Farber said the chocolate maker is hiring more employees.

When I asked why their products were kosher, Farber — whose products are available at “higher quality” candy stores — explained: “There’s sort of a cache about being kosher.”

My basket of kosher candy was quickly filling up, but like a kid out trick or treating, I wondered if I should dare knock on one more door.

The Equal Exchange fair-trade organization sells a Halloween kit that consists of 150 individually wrapped, bite-size milk or dark chocolate bars and an equal number of illustrated information cards. Headlined “Chocolate Can Be Scary,” the cards presented the reasons for choosing fair-trade products: We “pay farmers a fair price for their cacao,” as well as “make improvements in their communities, and help protect the environment.”

With “a Jewish audience in mind, many of our products are kosher,” she added.

Sklar noted that some of what Equal Exchange sells is also distributed additionally through two Jewish organizations: Fair Trade Judaica and T’rua, a human rights organization whose members are rabbis and cantors of all denominations.

Pointing out that most of the chocolate sold in the U.S. is the product of West African “young boys who are used as slave labor,” Sklar, who is Jewish, thought it was important for “Jews to support fair trade,” she said.

As for me, at this last stop for kosher trick-or-treating trail, I had found a Halloween candy that reached a different level of kashrut: It was not only pure in production, but in spirit as well.