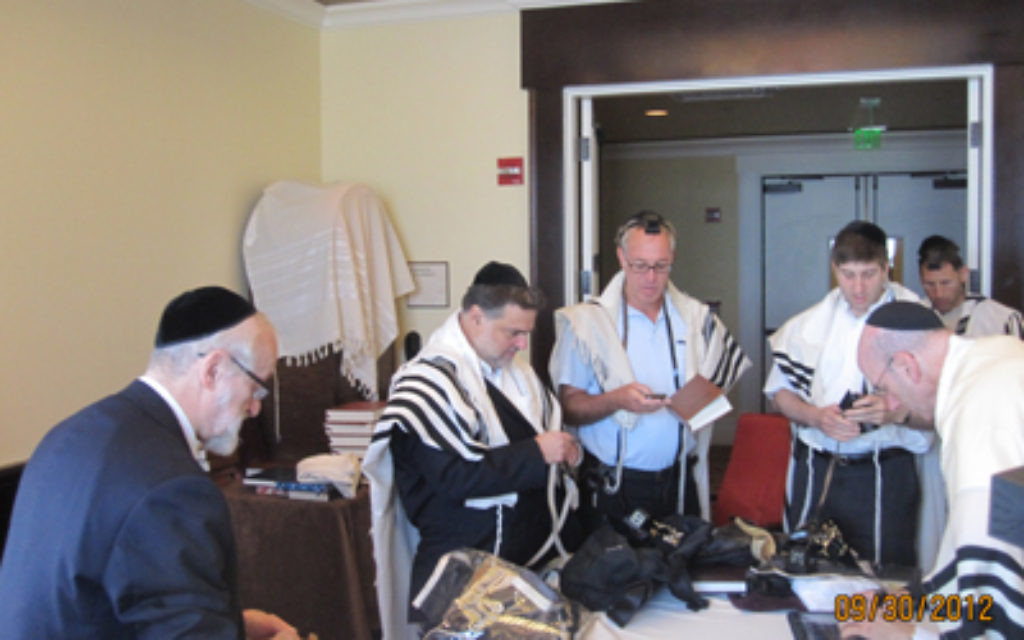 Tampa — Delegates to the Republican National Convention here this week were surprised to see men wear yarmulkes walking through the convention floor and mingling with other delegates.

“People kept coming over to us all night and asking what we were doing here,” said Judah Ribiat. “We said we believe in the principles and values of the Republican Party. One of them asked, ‘How can we get the other 80 percent of Jews to join you?’”

The men — 14 in all — were from Lakewood, N.J., and had come at the invitation of their synagogue president, Dr. Richard Roberts, who three months ago sold his generic drug company, Specialty Pharma Co., for $800 million and has long been a financial supporter of the Republican Party.

“Our mission here is a Kiddush HaShem [the sanctification of God’s name] — it’s not for business interests,” said Roberts, a medical doctor who also has a doctorate in biophysics. “I told everybody that sometimes frum [observant] people need to show others how secularly and ‘with it’ we are. Our mission is to be our frum selves and to let people see what frum Jews are. And the reception has been overwhelmingly positive from many senators, governors and staff people, and from non-Jews who just come up to us to say hello.”

He recalled one non-Jew coming up to him with “eyes wide open and saying, ‘Jewish conservatives?’ He was in shock.” (In fact, there were only eight Jews in the New York delegation.)

One delegate, an ophthalmologist from Detroit, greeted Roberts warmly and said he believes that four years ago he and his wife were “the only Jews at the convention.”

“I told him that as Orthodox Jews we have many of the same values as the Republican Party,” Roberts said, adding that he told someone who handed him a Romney button imprinted with the Star of David that he didn’t need such a button.
“Because we wear yarmulkes, we don’t need buttons for people to identify us as Jews,” he explained.

Because of Roberts’ support of the party and its candidates, the group has had private meetings with a who’s who of the Republican Party. On Monday, they met with Utah Sen. Orrin Hatch. On Wednesday, just hours after New Jersey Gov. Chris Christie delivered the convention’s keynote address, they sat down with Christie and 40 other governors for a lengthy meeting.

Each has credentials to get into the convention. With the help of the local Chabad, they have had the use of a Torah all week and have conducted morning prayers in a hotel in Clearwater Beach, about an hour from the convention center. Roberts said he decided on the trip too late to book closer accommodations. They arranged to have kosher food sent to their hotel each day from kosher caterers in Tampa and Orlando. And each evening at 8 p.m., they hold afternoon and evening services in a private lounge reserved for the Republican Governor’s Association, a group dedicated to electing Republicans to governorships throughout the country. Richards is a member of the RGA’s executive roundtable. And they watch the convention from the floor or from a private skybox reserved for the Republican Governor’s Association.

One of the group, Daniel Lemberg, stressed that they chose to become Republicans “because of a thought process; we’re not just fundamentalists blinding following a leader. Jews, as well as the Republican Party, should be affected by values and should consider whether it’s time to stop following blindly values they had without thinking about them.”

Roberts, 55, who was raised as a Reform Jew in the Philadelphia suburb of Abington Township, is a baal teshuvah, a returnee to the faith who has embraced an observant lifestyle. He said he became frum at the age of 30 and five years later married a woman who grew up frum; they have six children and all were raised attending right-wing yeshivas in Lakewood.
“I always felt a strong nationalistic attachment to the Jewish people, although I knew nothing about the religion,” he said after putting away his tallit and tefillin one morning.

Roberts credits Rabbi Michael Skobac with helping him become a baal teshuvah. He said when their first child turn a year old, he and his wife decided to move from Yardley, Pa., to Lakewood because it had a “more developed frum community with kosher stores, shuls and yeshivas. … My oldest daughter is this year teaching Navi [the prophets] in a frum high school.”

Although he said his parents were at first “reluctant” to see him choose this lifestyle, Roberts said that when he married and started having children “they both appreciated the superior quality of life and the relationships we had in my frum family.”

Because of his success in the pharmaceutical business — his company was the only one to receive Food and Drug Administration approval to develop and market the gout drug colchicine under the Unapproved Drug Initiative — Roberts has given back to the Lakewood community. Four years ago he built a shul, Kolel Ner Avraham. It now has a membership of 130 men and boys who pay no dues; any contributions they make to the synagogue are given to the neighboring shul that had previously existed there. There is a waiting list for membership in his shul.

Roberts’ contributions to politicians over the years got him into some difficulty only once. During the recall election campaign of Wisconsin Gov. Scott Walker — a labor-backed effort to unseat him — Roberts sent him a $50,000 check.

“What I didn’t realize was that five days before the election, Walker had to publish the names of his donors and the amounts they gave. I was the second largest donor. Two days later, I received threatening e-mails from pro-union advocates threatening my company and threatening me and accusing me of being anti-worker. One of the single mothers who joined my company as a secretary and is now in a significant management position was incensed that I was called anti-worker and said the opposite is true. So because of those e-mails, I immediately wired the Walker campaign another $50,000.”

Roberts said Walker called him after winning the election and apologized for the threatening e-mails.

Roberts said he told Walker that although many donors might expect something in return, “all I’m asking for is that he maintain his integrity because that is important for the country. I’m concerned about the future of this country and believe the Democrats are destroying the incentive for people to be productive, which also leads to decay in society.”

This was the first national political convention any of the group ever attended. Larry Mandel said it was “good to be here and good to be seen — frum Jews participating in the political process. I don’t think we’d be here if we didn’t think we’d make a difference.”