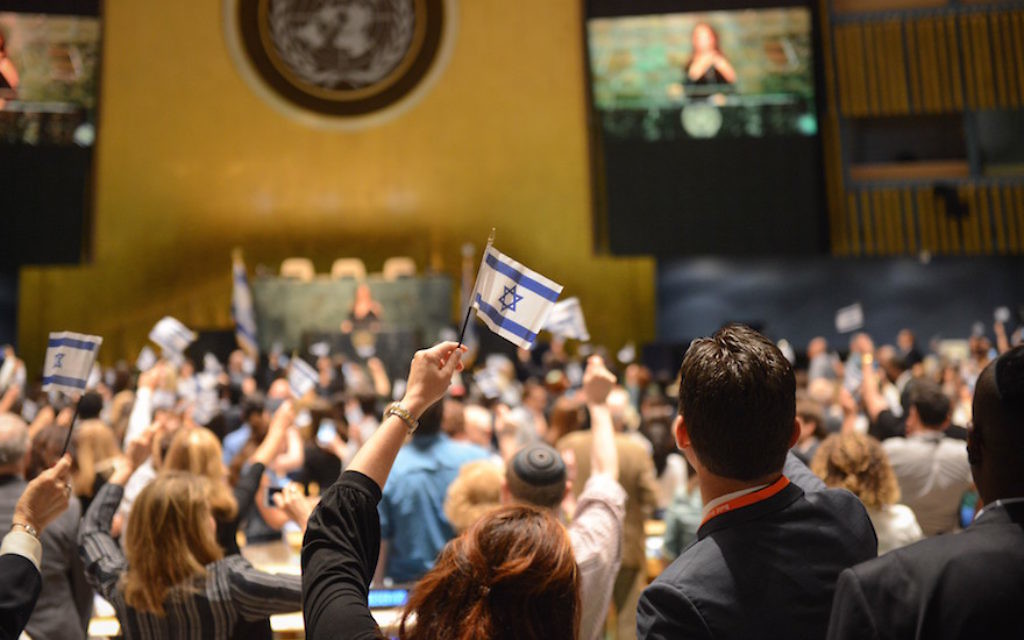 Echoing the government of Israel’s policy of vigorously opposing attempts to isolate the country through boycotts, the World Jewish Congress pledged to make the fight a top priority.

Lauder spoke Tuesday at United Nations headquarters in New York at an event the WJC organized together with Israel’s Foreign Ministry focusing on combating diplomatic attacks and boycotts against the Jewish state.

The WJC “will commit all of our resources, and all of our abilities, to help fight BDS,” Lauder said at the opening plenary in the U.N. General Assembly Hall. More than 1,500 students, dignitaries, public officials and representatives of Jewish organizations took part in the conference, which was one of the largest events organized by Israel on the subject.

Lauder also criticized the United Nations, which he said was now “singling out the only Jewish state for criticism.”

“It is no accident that we chose to look at an equally dishonest campaign against the Jews – the BDS movement – right here at the United Nations,” he said. “BDS is a modern-day anti-Semitism.”

Advocates of the boycott against Israel say it is a legitimate form of nonviolent opposition to Israel’s occupation of lands they view as belonging to the Palestinians, but critics of the effort argue it is aimed at ending Israel’s existence as a Jewish nation state.

In recent months, the legislatures of several U.S. states have passed motions against BDS. The issue is the subject of an intense legal fight across Europe.

BDS is illegal in France according to a 2003 law that prohibits discrimination against a certain nation or its people. On Monday PayPal, the online money transfer service, deactivated the account of BDS France, the French branch of the movement. A PayPal representative told a journalist from Dreuz, a pro-Israel French news site, that PayPal “devotes many efforts to countering abuse toward illegal means of our service.” Shortly after the account became unusable, The Jerusalem Post reported.

Britain’s government said earlier this year that it was formulating similar legislation. In Spain, several courts have declared the BDS movement discriminatory, including a constitutional tribunal that ruled in May that BDS is also anti-constitutional.

But elsewhere in Europe, government officials have defended BDS activists’ right to advocacy. Dutch Foreign Minister Bert Koenders on Thursday said calls for boycotts were protected under freedom of expression, the Reformatorisch Dagblad daily reported. He also said the Dutch government would not revoke the tax-exempt status of nonprofits supporting BDS. The Dutch government, however, opposes boycotting Israel.

“The Dutch line is that the government is opposed to boycotts of Israel but advertising BDS falls under freedom of expression,” Koenders wrote May 19 to a lawmaker who queried his office on the matter. Unlike many other European countries, the Netherlands does not have a law against denying the Holocaust for the same reason.

Separately, Irish Foreign Minister Charles Flanagan said Thursday in parliament that while his government “does not itself support such a policy, it is a legitimate political viewpoint, albeit one regarded in Israel as deeply hostile,” The Jerusalem Post reported.