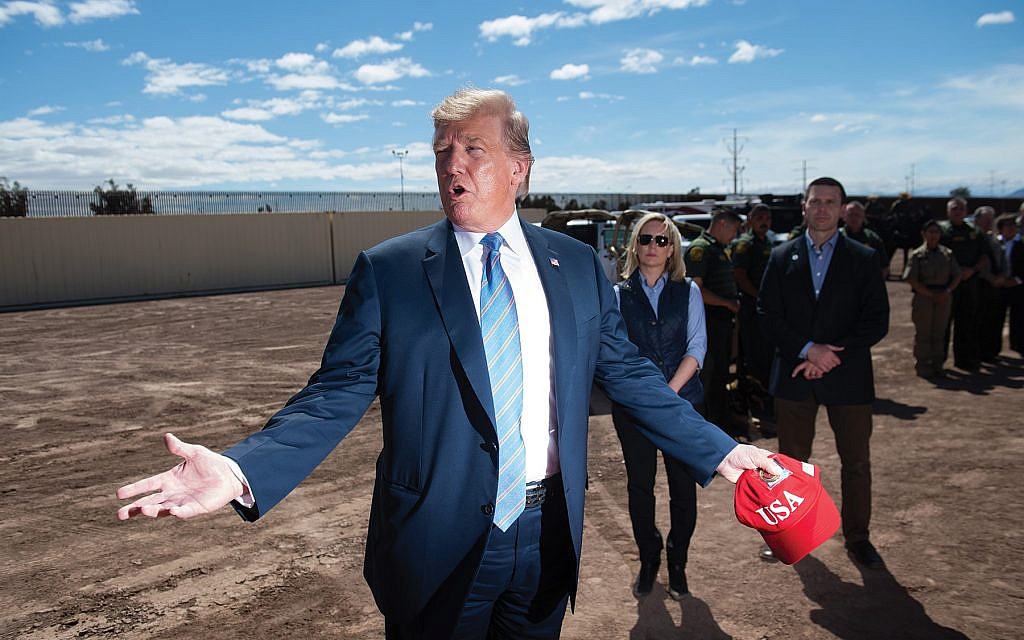 President Trump may well be attending a seder this Passover, given that Ivanka and Jared are observant Jews whose young children attend a Jewish day school in Washington.

I’ve been wondering how the president would respond when those grandchildren tell him they learned in school a key theme of the Haggadah: the mandate to welcome the stranger. Indeed, the president would hear the family recite at the outset of the seder: “This is the bread of affliction our fathers ate in the land of Egypt. Let all who are hungry come in and eat. Let all who are in need, come and join us for the Pesach.”

An inspiring message of hospitality, generosity and empathy.

And since the seder is a night for children to ask questions, the president’s grandchildren may well ask him, “Zeyde (or “Grandpa,” or perhaps “Mr. President”), how does the Haggadah’s message square with your insisting ‘our country is full?’”

Granted, that scenario might not play out quite as I imagine. But the president’s phrase calls to mind an award-winning 1981 German-language film, “The Boat Is Full,” about how, during the Holocaust, the “neutral” government of Switzerland turned down European Jews who sought refuge from the Nazis, insisting “the boat is full.” And the question that can be put to President Trump certainly defines a key contradiction between the message of Passover — and more broadly, an eternal Jewish value rooted in the Torah, with more than three dozen references to welcoming “the stranger” — and the record of a president whose views and actions counter a signature American tradition of opening our shores to those who “yearn to breathe free.”

Since the founding of our country, America has thrived as a nation of immigrants, welcoming those who seek new lives in a land of freedom and opportunity. Most American Jews can reflect at the seder on how their parents, grandparents or great-grandparents came from foreign lands, where Jews were not welcome and were too often persecuted, and sought a better future for their progeny on these shores. Indeed, Donald Trump’s grandfather, Friedrich Trump, emigrated from Bavaria in 1885 and later became a U.S. citizen. And the president’s wife, Melania, came to the U.S. from Yugoslavia (now Slovenia) in search of a better life.

While the president insists that “our country is full,” that we cannot accommodate more immigrants, the data shows that a dwindling birthrate and aging population indicate a shortage of workers in many parts of the country. The border crisis we face is one of attitude, not just numbers. The more the president has sought to portray those seeking asylum as robbers and rapists, the more difficult it has become to find a logical, if not dramatic, political solution to the problem — a solution that welcomes rather than demonizes those who qualify for entry into the U.S.

The Passover seder speaks to us about the transformative power of welcoming others into our midst. It’s not surprising that the seder is the most observed ritual of the year by Jews from around the world. After all, it is celebratory rather than somber, it takes place in the home among family and friends and it combines a powerful story of the triumph of good over evil with that of a family of faith being freed from slavery and becoming a people, on the path to the Promised Land.

One possible explanation is that the simple but powerful act of inviting others to share our meal, humble as it may be, is in itself liberating.

Many of us have heard stories about how even in the depths of the Holocaust, there were those who shared their scraps of food with other concentration camp inmates, giving each of them a momentary sense of social interaction, if not normalcy.

At the seder, there is something humanizing about sharing a meal for both the host and guest, transforming the content — in this case the matzah — from the bread of affliction to a taste of freedom.

The seder ritual has survived for centuries because its message is universal and eternal, and its values still resonate with us today. What questions could be more contemporary than “How should we treat the stranger who seeks comfort? Do we send her away or welcome her in? The Haggadah makes clear, “let all who are hungry come in and eat.”