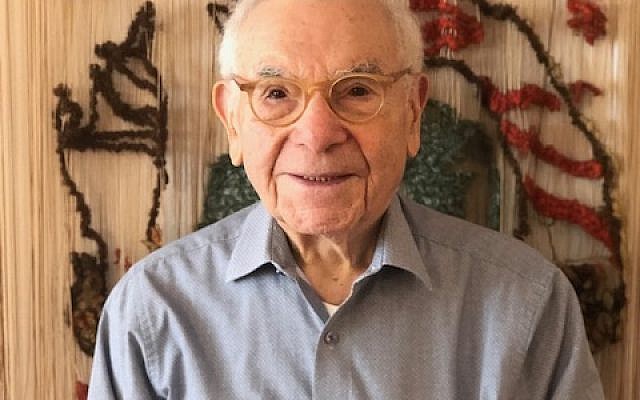 The history of the Celebrate Israel Parade begins with Theodore Comet. In 1965, Comet, then national director of the American Zionist Youth Foundation, dreamed up the idea of staging an expression of public support for Israel on Manhattan streets and uniting different elements of the Jewish community. The first parade, along Riverside Drive, included mostly members of different youth movements — no floats, marching bands, entertainers nor roller skaters, yet.

On Sunday, the 55th anniversary of the parade, Comet — who just celebrated his 95th birthday — will be heading up Fifth Avenue in an open convertible along with a great-grandson as an honorary grand marshal of the parade. Known widely as Ted, he is being honored for founding the parade, and for his many decades of leadership on behalf of Israel and world Jewry. 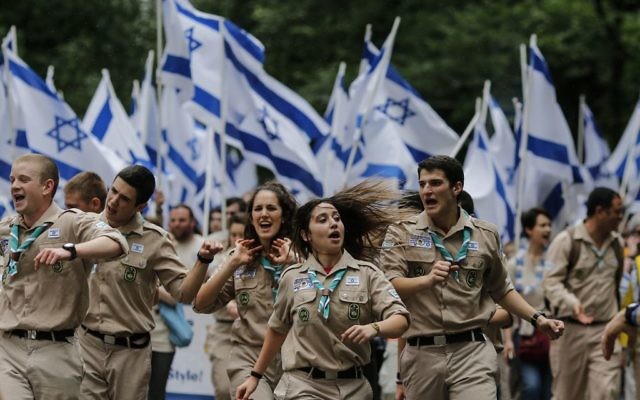 People march the annual Celebrate Israel Parade on June 3, 2018 in New York City. The parade marked the 70th anniversary of the founding of Israel. Getty Images

John Ruskay, executive vice president emeritus of UJA-Federation of New York, first met him in 1965 when Comet organized the first international Jewish youth convention in Jerusalem. Ruskay says, “It was amazing — Ben-Gurion spoke. And that was but the first time I had the opportunity to experience and be awed by what Ted created: the Israel Parade; the Israel dance festival; and the General Assemblies of the l970s, ’80s and ’90s, which were ‘must attend’ — because of the content — for all who cared about global Jewish life. Ted is a creative genius and a total mensch. What a gift to the Jewish world.”

When I met with Comet last week on his 95th birthday, his phone rang repeatedly, with birthday greetings from all over the U.S. and Israel. His apartment in a storied Upper West Side building is gracious, filled with light and art.

Asked questions about himself, he first talks about his late wife Shoshana. They met in 1952 and it was “love at first sight” — they were married for 60 years when she died in 2012. She communicated her trauma of surviving the Holocaust in a series of large weavings that hang in their home. Comet hosts groups to see them, and guides visitors through an interpretive tour, concluding with a video of her speaking in Jerusalem about survival. After completing these textiles at age 40, she went on to complete her high school equivalency degree as well as college and graduate school and became a psychoanalyst.

Comet is trim and walks quickly, with a bounce in his step — he says that he grew up trying to keep up with a much older brother. Ahead of the times, he and his wife taught yoga at the 92nd Street Y for 30 years.

Is he nostalgic for the good old days?

“Absolutely not,” he says.

“It’s a funny thing — it’s a different world, and yet I don’t feel like a stranger to it. I roll with the punches. I try to be open-minded.” 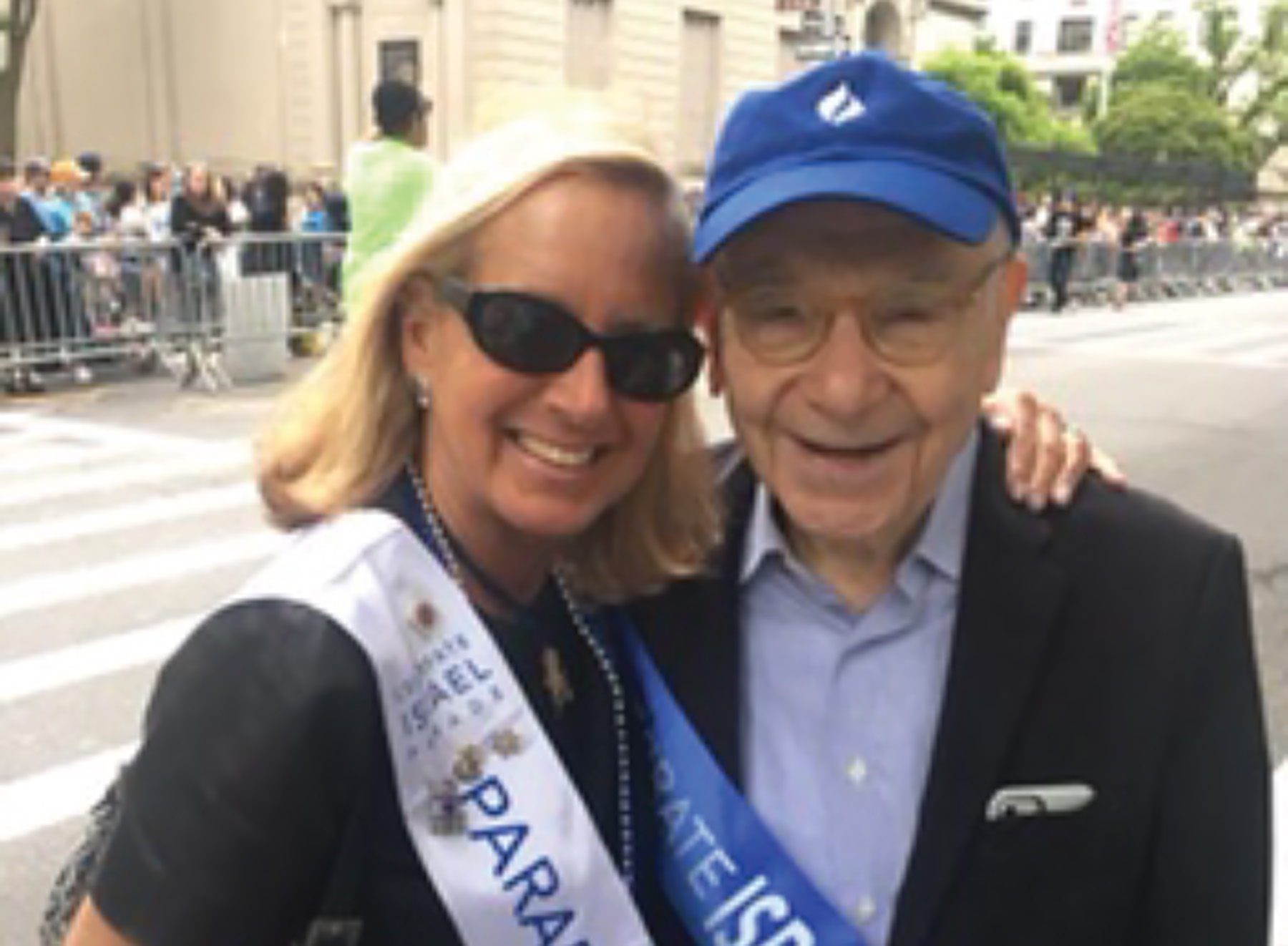 Ted Comet with Judy Kaufthal, co-chair of Celebrate Israel, at a recent parade.
Courtesy of JCRC

Looking back, he says, “I have seen the change in the American Jewish condition from feeling like a stranger in somebody else’s house where we had to watch our manners and walk carefully, to feeling like full partners, with the right to push for your own agenda. That was the major achievement.”

Comet joined the JDC in 1990, at a time when the fall of Communism created new entrée into Jewish communities in the former Soviet Union and Eastern Europe. There were also dramatic rescue operations of Jews from Ethiopia and Sarajevo. During those years, he led many missions to Jewish communities around the world.

Before his work with the JDC, he served for more than 20 years as assistant director of the Council of Jewish Federations (CJF) where, among his other responsibilities, he directed the organization’s international efforts and also directed the annual General Assembly. And prior to that, he was national director of the American Zionist Youth Foundation, where he produced folk dance festivals and the Israel Parade. In 1967, he worked to transform the parade into a demonstration of solidarity with Israel, just days before the Six-Day War.

Comet was long active on behalf of Soviet Jewry, as volunteer coordinator of the American Jewish Conference on Soviet Jewry. After retiring from JDC, he became executive vice president of the World Council of Jewish Communal Service.

While at CJF, he helped transform the annual assemblies of Jewish leaders from business meetings into more intellectual environments, bringing in speakers like Rabbi Yitz Greenberg, Rabbi David Hartman and Leonard Fein, and he heeded the message of the younger generation to be more thoughtful of achieving a sustainable future. 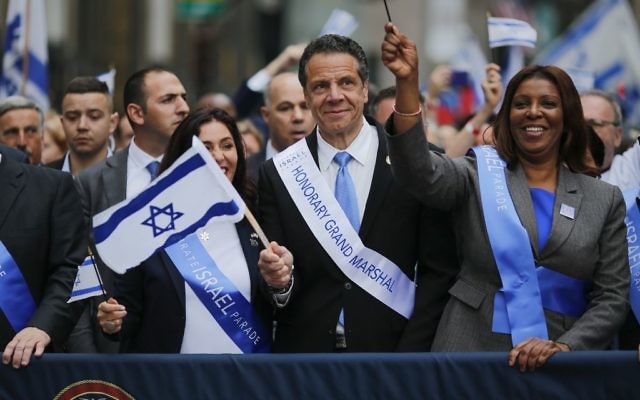 New York Governor Andrew Cuomo marches during the annual Celebrate Israel Parade on June 3, 2018 in New York City. Security will be tight for the parade which marks the 70th anniversary of the founding of Israel. Getty Images

“The challenge was: How do we achieve the creative continuity of the Jewish people,” he says. “That is still a challenge, a perpetual challenge.”

The son of immigrants from Poland, Comet was born in Cleveland, the youngest of seven. He attended public schools there and then moved to New York to enter Yeshiva University. For Comet, “moving to New York changed everything.”

His life direction was inspired by an experience in France, after World War II. In 1946 he went to Versailles to work at a home for orphaned children — many had come there from Auschwitz and other camps, or from hiding in the countryside. This was his first encounter with the JDC, which funded the program. One of the young residents was Elie Wiesel, and they began a lifelong friendship.

While Comet intended to go for one year, he stayed on for a second, and then returned to YU and received a degree in social work.

His connections to Israel run deep, through his work and family. He has a daughter in Boston and a son and extended family in Jerusalem. He is sad to see that these days, Israel plays less of a role in the lives of many young Jews. “I am still sustained by the idealism that initiated all of this,” he says.

A longtime member of The Jewish Center, he describes himself as traditional. Every Friday he meets with his luncheon club at a local kosher café— “You have to be over 90 to join.” When he tells them and others of his many projects — curating the textile exhibit in his home and addressing groups, organizing a traveling exhibit of portraits of Elie Wiesel, serving on several committees at UJA-Federation — they ask where he gets the energy. “That’s where I get the energy from. From involvement.” He adds, “I have so much to learn.”

“To me, retirement means getting a new set of tires, and then going out and do something.”

Judy Kaufthal, co-chair of the Celebrate Israel Parade, praises Comet for his inspired work in founding the Parade, and for his wide-ranging contributions to the Jewish community over many years. “I adore and am in awe of him — he’s such a young 95-year-old.”

Comet says, “Never think of yourself as a finished project, but rather as a work in progress. If you can achieve that, you can retain a sense of wonder and the underpinnings of youthfulness.” He says that the message of his life is resilience.