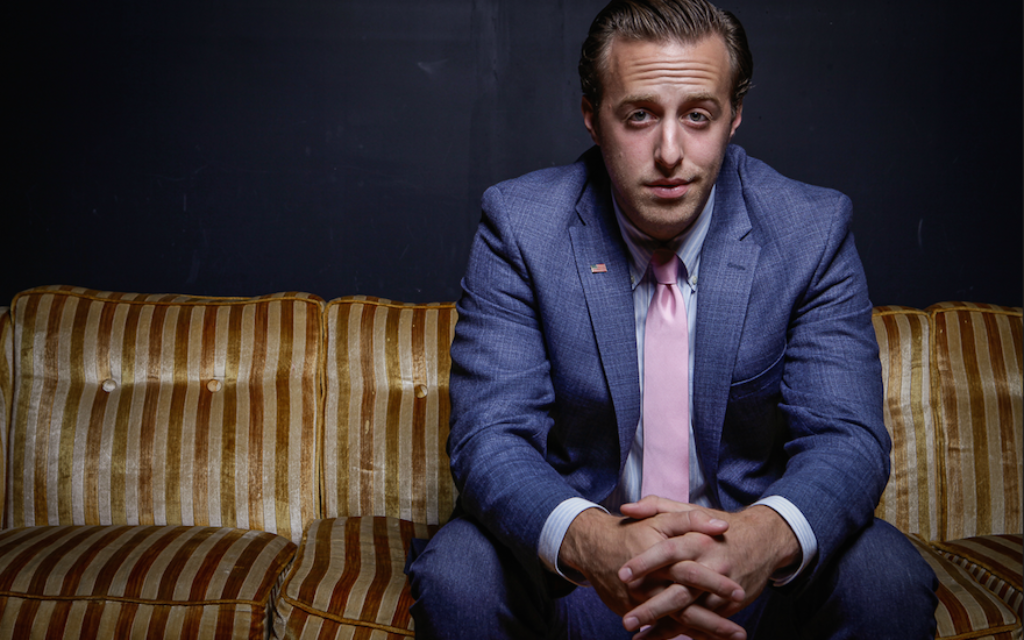 Alex Law is not your typical Jewish 25-year-old Bernie Sanders supporter. Instead of simply posting tweets with the hashtag #feelthebern or attending campaign rallies, the Collingswood, New Jersey, resident is running to be Sanders’ colleague in Congress.

The aptly named Law, who if elected would become the youngest person in Congress — barring the election of the slightly younger Jewish candidate Erin Schrode in California — has drawn attention to the race for the House of Representatives seat in New Jersey’s 1st Congressional District, in the southern end of the state. He left his job as an IBM consultant over a year ago to take on incumbent Donald Norcross, brother of New Jersey Democratic power broker George Norcross. Since then, his attacks on what he terms the Norcross corrupt political “machine” — it has been described as the most dominant political network in the state — have left enough of an impression to garner an endorsement from the Philadelphia Inquirer ahead of the June 7 primary.

Law spoke to JTA between campaign events about his thoughts on a two-state solution, his Jewish deli food preferences and why he doesn’t think his age matters in the upcoming primary election.

JTA: Were you always interested in getting into politics? Or was there something about the opportunity presented by what you’ve called the corruption in this specific race that drew you in?

Law: It was a little bit of both. My family has always been involved in politics. My grandfather was the mayor of the small town that I live in now, Collingswood, New Jersey. My father was on the school board of Voorhees, New Jersey, while I was growing up. So I was always involved in public service. But for this election, I decided to run when I was watching the news and saw our then-congressman Rob Andrews being investigated by “60 Minutes.” I saw the process by which Donald Norcross essentially was appointed to take his seat. And when I started learning more about the Norcross group, the things he stood for, what his family had done in the area, I said I need to do something about it.

Erin Schrode, a fellow 25-year-old running for a representative seat in California, has said that Congress doesn’t have enough young voices. Is that another reason you’re running at 25?

It’s always a good thing to have diversity there, but as for Erin and I, our campaigns are very different. We’ve been running for 18 months, Erin’s been running for two or three months. And we’re running against someone who voted with Republicans more than any other Democrat in the state of New Jersey, who is tied to a tremendous amount of corruption and graft and cronyism. I don’t think the same could be said about Erin’s opponent. For us, the real reason we’re running, it isn’t about diversity, it isn’t about vanity, it isn’t about me. It’s about how do we make sure South Jersey stops getting taken advantage of by our government leaders.

One of the issues mentioned on your campaign site is the two-state solution. You’ve said you have very similar views to Bernie Sanders on this. Do you think, as he does, that the Democratic Party’s stance on the Israeli-Palestinian conflict needs to change?

One thing that is particularly stressful and difficult for Israelis in dealing with this is that Palestinians are the only group of refugees in the world that have maintained refugee status for more than a generation. So typically, if you’re a refugee and you have children and you’re settled in a new country, you eventually become citizens of that country. The Palestinians maintained their refugee status forever. So it’s creating a situation where there’s millions of Palestinians being declared displaced, even though that’s entirely inaccurate and very unfair towards Israel. So there are a lot of challenges … I certainly don’t have the answers, I don’t think anyone does.

You supported the Iran nuclear deal last year. Why were you behind it and how do you think it affects Israel?

What are some of the domestic issues you’re focused on tackling if elected?

Issues that I care a tremendous amount about [include] campaign finance reform, because I think until we prevent our democracy from being bought and sold, it’s going to be very difficult for us to compromise and make real solutions to problems. I care a lot about student loan reform. Right now our government — forget about private banks — our government lends to students at 12 percent while it often lends to banks at less than 1 percent. So what we’re doing is turning our students into profit centers and our banks into charities. That has to change. I talk a lot about environmental issues.

Last year you had trouble getting access to voter data that you claimed every candidate usually sees. Did you ever end up accessing it?

The Democratic Party of New Jersey declined to give me access to NGP VAN, the data that every Democratic candidate gets to use, because we’re running against this establishment machine candidate. And he used his political connections to make sure that did not happen. But we actually ended up going with a third-party solution, L2 data, which in my mind has been a lot better for us.

Bernie Sanders was asked this recently on NBC’s “Today Show,” so you might also enjoy the question: What’s your Jewish deli preference, corned beef or pastrami?

I’ve sort of flip-flopped — as a kid I always ordered corned beef and now as an adult I’ve been more into pastrami.