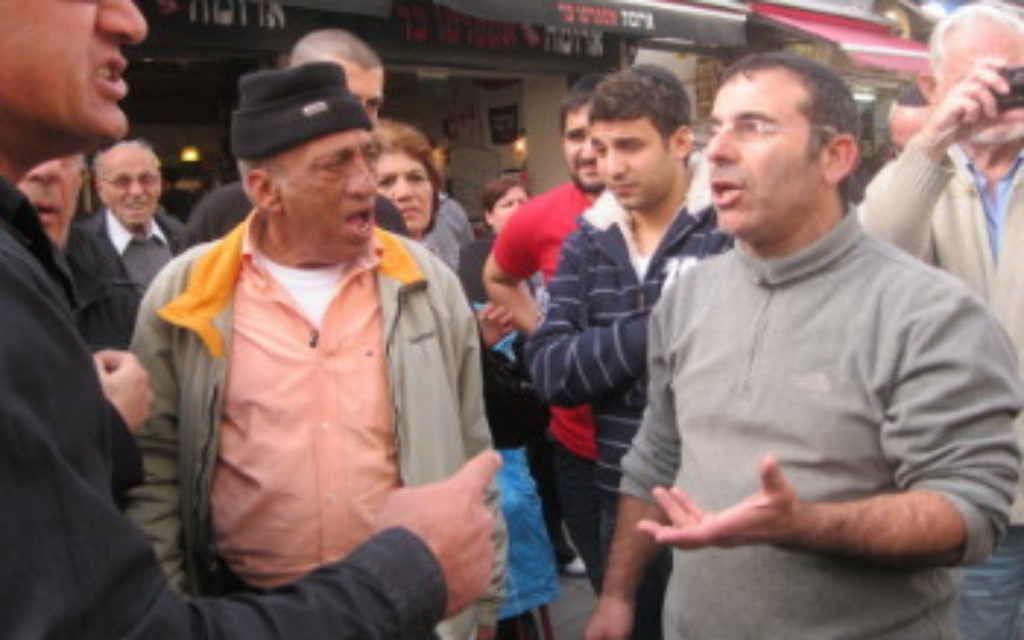 Jerusalem – During this winter of Middle East political discontent, even Israelis are demanding reforms from their government officials.

In contrast to the protesters in Egypt, Tunisia and elsewhere in the region, whose main concerns are an end to oppression, Israelis’ gripes are focused solely on the sky-high price of food, gasoline, water and many other necessities.

On Tuesday afternoon, about 300 people gathered at the edge of Jerusalem’s Mahane Yehuda market to protest against both the rerouting of the city’s bus lines and ever-rising prices. Another, larger protest against the price hikes took place in Tel Aviv later that day.

Last week, the Histadrut, Israel’s largest labor union, threatened to hold a nationwide strike unless the government increased the minimum wage and reduced prices. In a move that surprised many, Prime Minister Benjamin Netanyahu capitulated. Acting quickly, he lowered the government’s tax on gasoline and promised to lower the cost of water and public transportation, and to increase the minimum wage.

While no one in Israel, much less Netanyahu, fears a military or violent popular uprising, the discontent sweeping the Middle East appears to be having some effect on the Israeli public, analysts say.

"Leaders in the Histadrut must have felt the timing was right to do something," said Eitan Alimi, a Hebrew University expert on political protests. "I think the political activism in Egypt and elsewhere is a catalyst, though not a direct cause and effect. It comes from outside and its being capitalized by political agents in our society."

Israelis realize that prices have increased around the world, and that Israel is no exception. What they do object to are astronomical government taxes.

To purchase a new car, an Israeli must shell out an additional 83 percent of the car’s value in purchase tax, plus 23 percent in customs fees and value-added tax. Gasoline, which last week cost $8.50 a gallon, is also subject to sky-high tariffs.

In a bid to discourage the overuse of scarce water resources, the government raised the price of water so much that some bills have doubled, even tripled. Food prices have jumped 5 to 8 percent this year, while fruits and vegetables leaped 20 percent.

"Prices on a lot of items are very high," acknowledged Ze’ev Apter, the owner of a fresh produce kiosk in the Mahane Yehuda market in Jerusalem. "The very hot summer translated into shortages," he said, pointing to a batch of rosy red apples imported from faraway Washington State.

Some of Apter’s usual customers haven’t been around lately.

"The poorer people can’t afford a lot of the produce right now, but the American immigrants, people with enough money, are buying as usual," Apter said.

"The government isn’t doing anything for the weaker segments of the population," Raphael Aharon, a 58-year-old Jerusalemite and community activist, said following the Mahane Yehuda rally.

Aharon, an original member of the Black Panthers, a grass-roots movement of Sephardi Jews that organized sometimes-violent demonstrations demanding equality and better conditions for the poor in the early ’70s, said he and other former Black Panthers had come to the shuk specifically to rail against the price hikes.

"The situation now isn’t new," Aharon said. "After the Six-Day War the municipality built new neighborhoods, and the city prospered. But it forgot to include the residents of Katamonim and other poor neighborhoods in the improvement process."

Today, Aharon said, "everything is incredibly expensive. Young people can’t afford to buy a home. It’s time for the Israeli people to take a cue from the people in Tunis, Egypt and Iran and channel their frustration into action."

Overhearing the conversation, Orit Or, a member of the Chabad stream of Orthodox Judaism, said she feels "something in the air.

"Look what’s going on in the Middle East. In nation after nation people are rising up. This is all part of the master plan the Lubavitcher Rebbe predicted on the way to the coming of the Moshiach," Or said.

Eliezer Jaffe, founder of the Israel Free Loan Association, said Israelis do indeed seem to be having a harder time making ends meet.

"We have a backlog of several hundred applications that would take a million dollars to address," Jaffe said. His organization provides interest-free loans of up to $4,000 to people with a minimum income of $820 a month.

IFLA loans out $1.2 milion per month, and 99 percent of its recipients repay their loans over the course of a few years.

"More people are coming to us. For the most part our clients have jobs but as prices rise it makes it harder, sometimes impossible, for people living on the margins," Jaffe said.

In addition to small business loans, IFLA provides loans for everyday needs, like rent and mortgage payments, medical bills and many other expenses.

"A refrigerator dies, and a family doesn’t have any savings put away. We loan them the money to purchase one," Jaffe explained.

Taking a break while his loan application was being processed, Eliyahu, a working father of twin boys, said he had traveled to Jerusalem from Ramle, a 45-minute drive, because one of his sons has cerebral palsy.

"The first time I was here, I received a loan to buy a specialized walker. This time I need to renovate my bathroom so my son can use the shower," Eliyahu, who declined to provide his last name, said. "Both my wife and I work, but there’s nothing left over for the extras."

The Free Loan Association may be able to loan him up to half of the $8,240 needed for the renovation, Jaffe said.

Mordechai, a haredi father of seven, traveled from a fervently Orthodox community outside Jerusalem because he owes about $5,000 in medical expenses following complicated surgery to remove a tumor, and has a monthly overdraft of more than $3,000.

"I teach and my wife works, but the time I didn’t work following the surgery put us in a hole. So did the six months my wife didn’t get a paycheck from a job she subsequently quit.

"Interest-free loans are a blessing, a very Jewish thing," Mordechai said, noting that the loan he was forced to take to pay his medical bills charges very high interest.

Yona Cohen, IFLA’s director, said some of the people seeking her association’s assistance are in very dire need.

"Today was a hard day," she said, her eyes growing moist. In one case, a woman who underwent a heart transplant prior to moving to Israel – and is therefore not eligible for government disability payments – cannot work and asked for help.

"She told me she can’t put food on the table this Shabbat. She needs help paying her electricity bill," Cohen said.

"Another person, a man who needs a second kidney transplant, came to us as well. He was forced to sell his home.

"Times are tough for a lot of people," Cohen said.