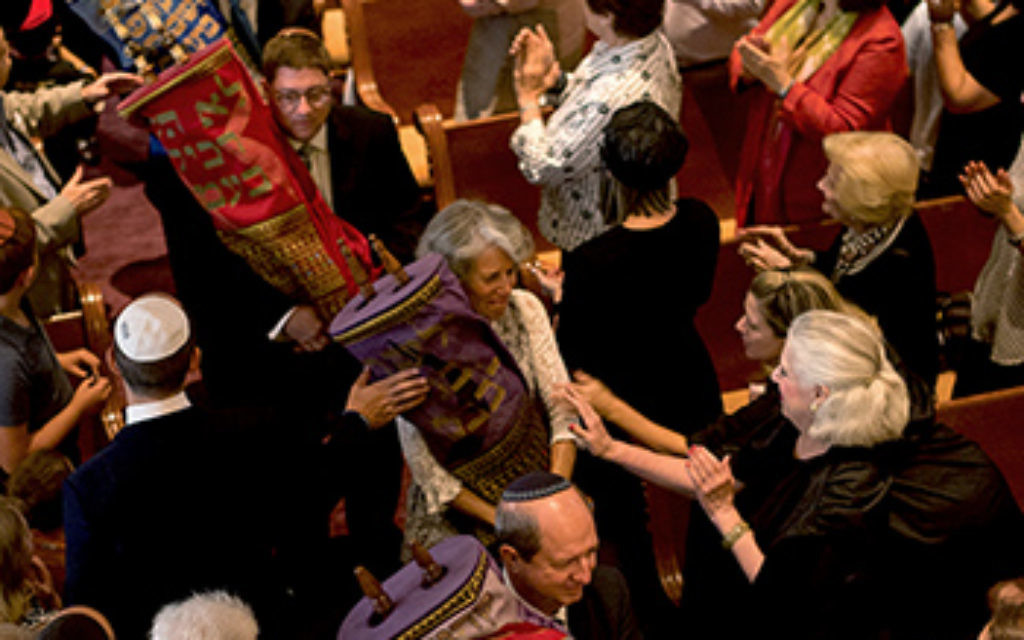 In June of 1958, 26-year-old Rabbi Haskel Lookstein sat on the bima of Congregation Kehilath Jeshurun and delivered his first sermon as the Upper East Side Modern Orthodox congregation’s assistant rabbi.

Sitting in an ornately cushioned wooden chair, the recent graduate of Yeshiva University’s rabbinical school, spoke about “thinking positively” and “having faith in the future.”

Last week, some 57 years after that initial Shabbat sermon, 36 years after he succeeded his father, Rabbi Joseph Lookstein, as the congregation’s senior spiritual leader, four years after a four-alarm fire heavily damaged the building’s interior and consigned the members to a succession of temporary locations for worship services, three days after he joined a joyous dedication ceremony for the rebuilt synagogue on East 85th Street, Rabbi Lookstein took part in his final Rosh HaShanah services at Kehilath Jeshurun as senior rabbi.

Now 83, he will become rabbi emeritus on Jan. 1, and Rabbi Chaim Steinmetz, who has served for 19 years at Congregation Tifereth Beth David Jerusalem near Montreal, will become senior rabbi.

On Rosh HaShanah, Rabbi Lookstein delivered two sermons about developing gratitude, as he had the previous Shabbat. “Gratitude is not a natural quality,” he said. “It’s an acquired characteristic.”

Each sermon lasted 15-20 minutes. “Our attention span is not what it was 58 years ago,” he said this week.

Rabbi Lookstein spoke about his gratitude that “the walls did not collapse” in the fire. Gratitude that the synagogue and the Ramaz Lower School next door, which also had to move to temporary quarters after the 2011 fire, are back in their old spaces. Gratitude “for the miracles that made our restoration possible” and that he “was able to experience it.” Gratitude that the neighborhood’s Jewish community reached out after the fire, that the congregation’s lay leadership donated “thousands of hours of their time” to guide the institutions’ renovations and that membership in the congregation and enrollment in Ramaz both increased in the last four years.

“Neither the shul nor the school missed a beat,” they didn’t miss a prayer service or a class, the rabbi said this week.

“I could never have dreamt how incredibly the community would respond to such adversity,” he said in last week’s dedication ceremony for the rebuilt synagogue and Lower School. “The focus was never on why did this happen to us, but rather on what do we have to do now?

“We called to God out of a dreadfully damaged 110-year-old, beautiful wooden synagogue,” Rabbi Lookstein said. “But when God answered us, He blessed us with essentially the same classic synagogue, but in a brand new, concrete, fire-resistant, code-compliant building.”

“We turned catastrophe into an opportunity,” he said.

Among the 600 people who attended the dedication ceremony were representatives of Temple Emanu-El, which, along with nearby the Park Avenue Synagogue, had offered its worship and classroom space to Kehilath Jeshurun after the fire. “They saved our lives,” Rabbi Lookstein said. On the High Holy Days, when more space was required, services took place in the auditorium of the Metropolitan Museum of Art.

The sanctuary of the reconstructed neoclassical site was designed to look like it had before. The seats including his on the bima — had been removed before the fire for an extensive renovation.

The earlier renovation of the limestone building was to cost $4 million; Rabbi Lookstein declined to say how much the restoration after the fire cost.

The restored synagogue features a new chapel and library in the basement and two additional floors atop the structure, which will be used for Lower School classrooms and a gymnasium.

“Out of the ashes of destruction can come the means of rebuilding,” Rabbi Lookstein likes to say, citing the Talmudic statement “that on the day the Temple [in Jerusalem] was destroyed, the redeemer was born.”

The Lower School will use its increased space for four new classrooms and for a specialty wing that will allow for new classes in science, art and music, said Rabbi Eric Grossman, who became Ramaz’s Head of School this year.

Finishing touches on the renovations will make it too complicated for Kelilath Jeshurun to build a sukkah on the roof as in pre-fire years, Rabbi Lookstein said. Instead, the congregation will put up the holiday hut at the Middle School across the street and plans to serve close to 2,000 meals there.

Rabbi Lookstein said his exact duties in his emeritus position are not determined yet; some teaching, some sermonizing. “I’m not going anywhere,” he said.

Next Tuesday night and Wednesday, Rabbi Lookstein will participate in his last Yom Kippur Service at Kehilath Jeshurun as senior rabbi. He’ll be in “exactly the same seat, only refurbished,” that he has sat in since 1958.

Again, he’ll talk about gratitude. In essence, he said, “It’s the same sermon.”