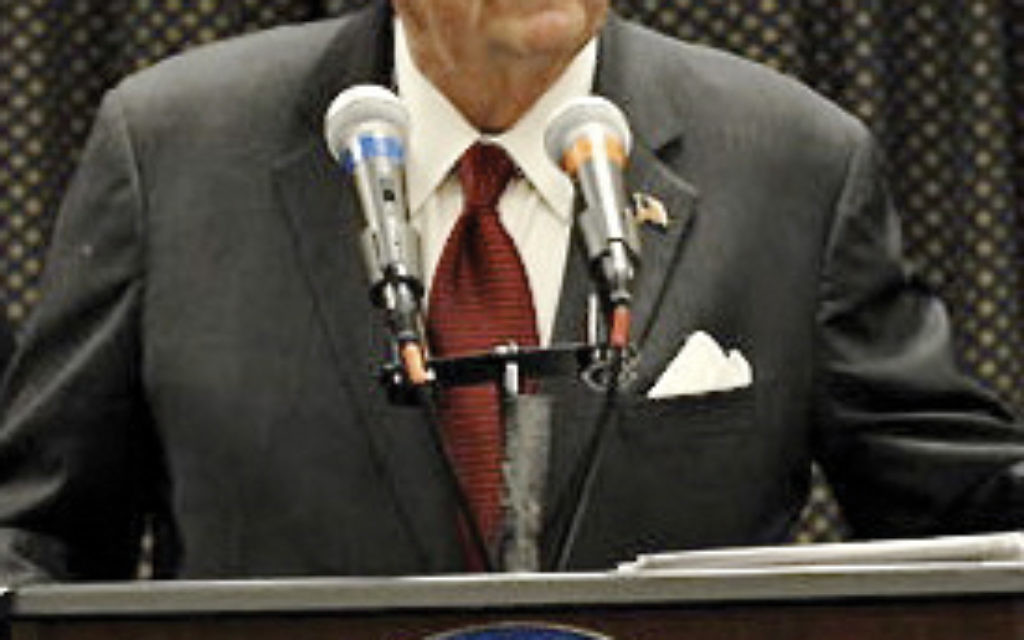 With the Brooklyn district attorney’s case against chasidic sex abuse whistleblower Sam Kellner seemingly falling apart amid mounting evidence that Kellner’s main accuser may have been manipulated and paid to lodge false charges against him, sexual abuse survivors and advocates are taking to the streets to protest the DA’s conduct in the case.

Abuse survivor, advocate and writer Chaim Levin has organized a protest for Thursday outside the Jay Street offices of Brooklyn DA Charles Hynes to support Kellner and, according to Levin’s Facebook post about the protest, “demand that the unfounded charges against [Kellner] be dropped immediately.”

In an interview with The Jewish Week on Tuesday, Levin said that Kellner — who reported his son’s allegations against Baruch Lebovits to police and helped bring forward more alleged Lebovits victims to the DA — is “paying a really big price for what he did and we need to stand up for him.”

“He did more than my parents did,” Levin continued. “He reported a crime. He lost his job, his housing, for a case where they have nothing on him. And we still don’t have any idea about what is happening with Lebovits.” (Lebovits, a cantor and prominent member of the Munkacs chasidic community, was convicted in 2010 and sentenced to 10 to 32 years in jail; his conviction was overturned on a technicality and no new trial date has been set.)

“[The DA] is pointing the finger at the wrong person,” Levin told The Jewish Week, “and it’s time we looked at them in the eye and said ‘enough.’”

Kellner’s case was scheduled to go to trial on Monday, but was adjourned over the objections of Kellner’s attorney, Niall MacGiollabhui, until July 29. In a courtroom packed with Kellner’s family and friends, the prosecutor told the court that the DA was “not ready to proceed to trial” and needed more time to “look into” a man named Zalmen Ashkenazi and his connections to the Lebovits family.

Ashkenazi’s name first surfaced publicly after The Jewish Week obtained a tape recording several months ago in which Kellner’s main accuser, a man the paper has referred to as “Yoel,” told an acquaintance that he was told to “go against” Kellner by a man named Zalmen Ashkenazi, who had also supplied him with an attorney. Zalmen’s brother Berel was a character witness for Lebovits at trial, where it was revealed that he too is an alleged child molester who tried to suppress the testimony of a witness against Lebovits.

On Monday, MacGiollabhui argued in State Supreme Court that the Ashkenazi investigation was “of no relevance” to Kellner’s case as discovery materials turned over to the defense on the eve of trial make it clear that Yoel will not be testifying at trial due to myriad changes and inconsistencies in his story. (The Jewish Week first reported about the discovery materials in an exclusive online story posted Sunday.)

MacGiollabhui asked the court to allow the case to proceed with the remaining core witness against Kellner, Meyer Lebovits (the son of Baruch Lebovits). The attorney argued that Kellner — who has been under indictment for 28 months and was “paraded in front the media with the DA loudly proclaiming his guilt” — deserved his day in court.

After Assistant District Attorney Joseph Alexis indicated that prosecutors would not be ready on July 29 and informed the court that he would be on vacation in August, MacGiollabhui charged that the DA was “trying to spin this case out as far as possible beyond the primary.” Hynes, who is seeking re-election to a seventh term, is facing two challengers in a Sept. 10 primary.

The judge, Ann M. Donnelly, said the issue will be revisited on July 29.

MacGiollabhui received the damaging information about Yoel — as well as other evidence favorable to Kellner’s case — from prosecutors last Friday.

Kellner, a resident of Borough Park, is charged with paying Yoel to fabricate claims of sexual abuse by Baruch Lebovits. Kellner, whose son is also an alleged Lebovits victim — and who brought additional Lebovits victims to the police — is also charged with attempting to extort money from the Lebovits family via emissaries sent to Lebovits’ son Meyer.

The evidence turned over last week includes notes of interviews prosecutors conducted with Yoel over the past two weeks. In the interviews, Yoel made a series of inconsistent statements, including some that directly contradict his grand jury testimony against Kellner.

For example, while Yoel testified to the Kellner grand jury that he knew Lebovits from synagogue, in a July 1 interview with Nicholas Batsidis and Joseph Alexis, two assistant district attorneys, and Rackets Division Chief Michael Vecchione, he claimed that he had “never seen Baruch Lebovits in his life.”

In the same interview, Yoel also denied picking Lebovits out of a photo array, which, along with Yoel’s statements to a detective, led to Lebovits’ arrest. However, five days earlier, on June 26, he told prosecutors that Lebovits “could have molested me. [I] can’t really say.”

During the course of these interviews, Yoel also told prosecutors that the reason he came forward with his allegations against Kellner was because, according to their summary of the conversation, he had become “disenchanted” with Kellner after he failed to pay Yoel “a fee that the two had agreed upon for his false testimony.” However, in the Kellner grand jury, Yoel testified that Kellner gave him approximately $10,000 to testify against Lebovits.

All of the inconsistencies and contradictions in Yoel’s statements seriously undermine the prosecution’s case against Kellner, experts say.

According to former Manhattan prosecutor and defense attorney Mark Bederow, “This witness has self-immolated. First, he swears to a pattern of years-long abuse by Lebovits. Then he reverses course and claims that he lied under oath and that although he knows Lebovits, he fabricated the abuse claims against him because Kellner paid him to do so. Then, on the eve of [Kellner’s] trial, he contradicts both prior sworn statements by bizarrely claiming he has never met Lebovits, but that [Lebovits] ‘may’ have molested him. He then alters his sworn testimony by claiming that he had not been paid by Kellner before perjuring himself at Kellner’s request.

“I don’t see any set of circumstances under which the DA can proceed with Yoel as a witness against Kellner.”

DA spokesman Jerry Schmetterer did not respond to an e-mail seeking comment on whether, in light of these recent disclosures, the DA plans to dismiss the charges against Kellner relating to Yoel.

In his recent interviews with prosecutors, Yoel also acknowledged that community activist Zalmen Ashkenazi — who Yoel initially told prosecutors he did not know — has paid for his flights to and from Israel (where he is currently living) as well as his school fees, apartment and lawyer. He also said that he needs Ashkenazi’s “permission to return to the U.S. when [he is] in Israel.” Credit card and travel records obtained by prosecutors and supplied to Kellner’s defense attorneys confirm that Ashkenazi has paid for several of Yoel’s flights.

The DA also confirmed that Lebovits’ attorney made several unsuccessful attempts to obtain a plea deal on charges related to Yoel, something Kellner’s lawyers see as evidence that Yoel was in fact a victim of Lebovits. As a result, they believe that the DA — who has long been accused of deferring to ultra-Orthodox leaders in order to curry political favor — in essence colluded with Lebovits’ defense attorneys to suborn perjury in presenting Yoel to the grand jury to testify against Kellner.

This new information lends significant weight to suspicions Kellner’s attorneys have harbored all along: that Yoel was intimidated out of testifying against Lebovits at trial and then further manipulated to make false allegations about Kellner in order to hinder the DA’s ability to retry and convict Lebovits. That the DA possessed so much circumstantial evidence to this effect before Kellner’s arrest in 2011 has led them to question how and why their client was ever indicted.

Indeed, the fact that the DA apparently unquestioningly took these allegations against Kellner from Lebovits’ defense attorneys and failed to investigate — until finally forced to do so by the prospect of the truth being revealed at Kellner’s trial — the possibility that Yoel was a victim of intimidation and witness tampering has also convinced Kellner’s attorneys of the need for an independent investigation.

“There is overwhelming evidence of blatant and concerted efforts by Lebovits and his associates to pervert the course of justice and cover up his appalling crimes,” MacGiollabhui, told The Jewish Week.

“What is profoundly disturbing is that none of these efforts would have been successful without the active cooperation of the district attorney,” MacGiollabhui continued.

“Clearly, an outside investigation is now required to ensure that those ultimately responsible are held to account for this travesty of justice.”

The call for an outside investigation comes as DA Hynes’ office is being scrutinized for a number of cases that have fallen apart or resulted in vacated convictions in part because of prosecutors’ failures to meet their legal obligation to turn over information that is favorable to the defense.

The prosecution of Kellner, abuse advocate Chaim Levin has said, could complicate the DA’s ability to pursue sex abuse cases in the haredi community.

In May, Levin told The Jewish Week that he met with sex crimes prosecutors at the DA’s office and they asked him whether he could help them find additional victims of Baruch Lebovits. Levin recounted that he told the prosecutors that given what happened to Kellner, many victims and advocates did not trust the DA’s office and might not come forward with information.

Hella Winston’s reporting on the Sam Kellner case has been funded in part by a grant from the Fund for Investigative Journalism.