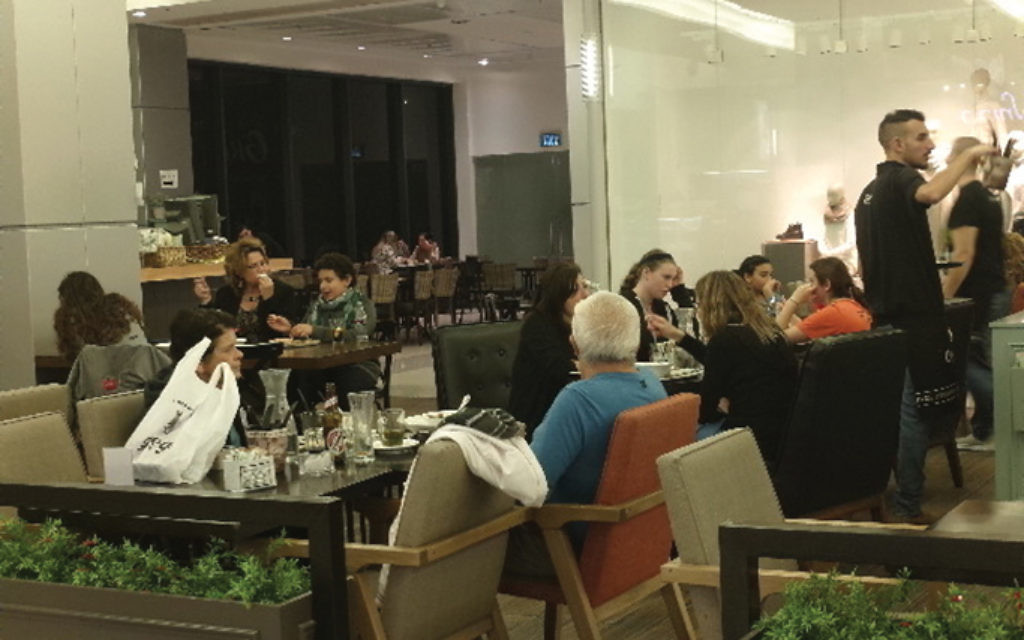 When participants in a UJA-Federation of New York mission entered a Jerusalem restaurant on November 9th for a pre-arranged meal, they found plenty of empty tables.

Other would-be diners had stayed away because of two nearly coinciding terrorist attacks in the city earlier in the day.

“The moment something happens, people don’t go out,” said Amir Sznajderman of the Jewish Agency for Israel, who was accompanying the UJA-Federation mission.

Business at the restaurant dropped by 50 percent in the last month because of the spate of Palestinian knife, gun and car attacks on Israeli civilians and soldiers that terrorized the city.

“The owner said he had been in business 11 years and had never seen such a decline in business in such a short period of time,” Sznajderman said.

That proprietor is one of 70 business owners in Jerusalem who have thus far applied for emergency loan guarantees made available by UJA-Federation of New York. The organization has made such emergency loan guarantees available during prior times of conflict, according to Alisa Kurshan, executive vice president of Community Planning and Agency Resources, but they have been infrequent.

UJA-Federation allocated $200,000 on Oct. 27 to guarantee $1.4 million in emergency bank loans to struggling businesses, according to Eric Goldstein, UJA-Federation’s CEO.

“The wave of terror has significantly reduced revenues for many Jerusalem businesses that rely on foot traffic and walk-in customers,” Goldstein said in a UJA-Federation statement.

After the first wave of Palestinian attacks, Israeli authorities responded with a massive call-up of police and soldiers — deploying them on Jerusalem’s streets, along highways and in residential areas. Customers slowly began returning to Jerusalem stores as attacks in the city ended and moved to other parts of the country.

But on the day of the mission, two Palestinians, aged 12 and 14, stabbed and lightly wounded a 25-year-old Israeli security guard on the light rail in Jerusalem. And a Palestinian terrorist stabbed and lightly injured a man in an attack near the Damascus Gate in the Old City of Jerusalem. Police shot and killed the terrorist, shot and wounded one of the youths and arrested his companion, who had been seized by other passengers.

Following those attacks, Sznajderman, who is director of economic development and loan funds for the Jewish Agency, said the restaurant owner told him that 50 percent of those who had reserved tables for that evening had cancelled.

“It takes time for business to recover, and every time something happens, business drops again,” he said.

Since the wave of Palestinian terror attacks began Oct. 1, there have been about 80 attacks throughout the country that have killed 11 Israelis and wounded about 200.

“Our office is in Jerusalem, I was born and raised in this city — and it was half empty [after the first wave of attacks last month],” Sznajderman said. “We were then approached by businesses in need and so we approached [UJA-Federation of New York] to see if something could be done. Our office has money for loan guarantees, but that money is dedicated to helping establish new businesses and helping others to grow. The businesses coming to us needed working capital loans.”

Michael Lustig, chair of UJA-Federation of New York’s committee Empowering and Promoting Inclusive Communities in Israel got the call.

“I knew anecdotally” about the problem, he said, noting that his sister had sent him a picture of Jerusalem’s normally bustling Mahaneh Yehuda open-air market three weeks ago. “It was a ghost town,” he said. He himself returned last week from Israel after a two-week visit.

After speaking with Sznajderman, Lustig said he immediately consulted with UJA-Federation of New York’s loan approval committee in Jerusalem and his New York-based committee.

“Within 24 hours, the decision was made to do this,” Lustig said. ”We had a crisis and we had to make a quick decision.”

Since then, of the 70 businesses that have filed applications, 20 have been approved to receive about $470,000 in loan guarantees.

Sznajderman said it takes about a week to review each application and that so far about 70 percent of those reviewed have been approved.

“We do it as quickly as possible and actually visit each business,” Sznajderman said. “We check their business plan and their financials and whatever else needs to be checked to make sure we are not giving money to a bad business. … I’ve spoken face-to-face with many businesses and they are showing us a 60 to 65 percent decrease in sales. The economic minister responsible for Jerusalem said that overall business is off 55 percent.

The loans have gone to established businesses — clothing stores, restaurants, tourist activities, wedding halls, candy stores and other stores that youngsters used to flock to after school.

“Kids are not walking the streets anymore,” he said.

Sznajderman stressed that applications are coming “from some very successful and well known businesses in the city. Without working capital they are stuck because they have to pay rent, salaries and pay for supplies — and some banks are not willing to give them credit without additional collateral.” He added that when the Jewish Agency employee handling the loan fund said calls to tell a business owner that the loan guarantees have been approved, she hears “sighs of relief” because they have been “suffocating.”

“We have so many pending applications that we will see within a week whether all of the loan guarantees have been fully utilized,” Sznajderman said. “The bank branch manager has complained that he can’t handle all the business. That’s a good complaint. … I do believe that if there is a need [for additional loan guarantees], New York will again stand up to help.”