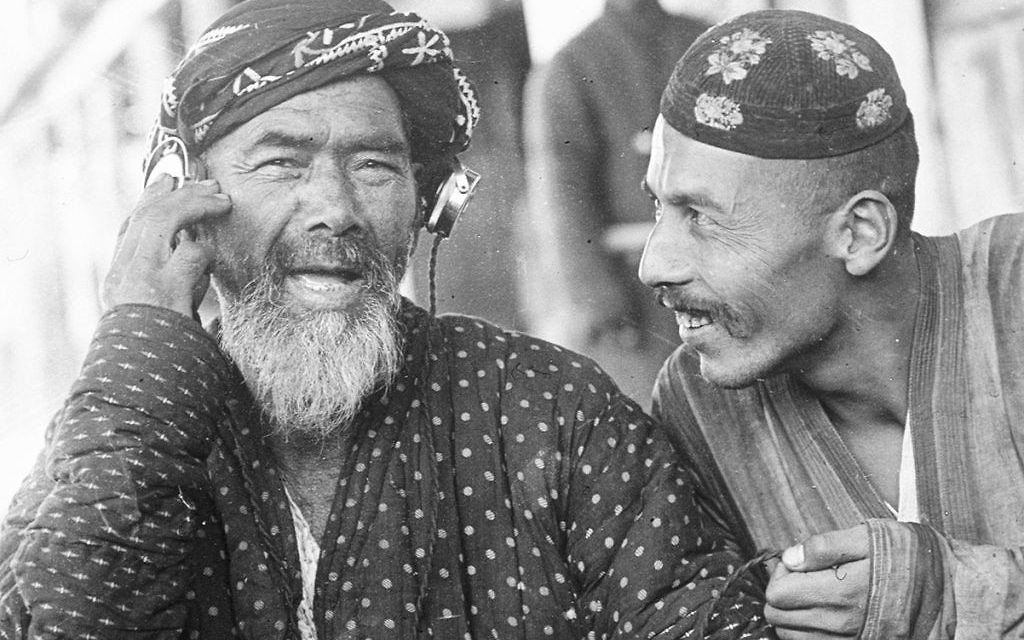 In a corner of one of the galleries at the beginning of The Jewish Museum’s compelling new show “The Power of Pictures: Early Soviet Photography, Early Soviet Films,” an unusual 1934 photo-book with foldouts and overlays stands in a glass case, resting in its intricate red fabric-covered slipcase.

A wall text explains that within a few years of its publication, many of the people photographed in “Ten Years of Soviet Uzbekistan,” the work of photographers Alexander Rodchenko and Varvara Stepanova, had “fallen victim to Stalin’s purges. To avoid a similar fate, owners of the volume, including the artists themselves, were required to erase those figures with ink, cut them out, or throw the book away.”

Next to the powerful black-and-white images on the walls from years following the Russian Revolution — photos with unexpected angles, inventive silhouettes and avant-garde composition, showcasing new technology, cityscapes, portraiture, military prowess and individual strength — the photo-book commands less attention. But the book’s history of artistic freedom capped with artistic control is the dark story shadowing all this creative use of light.

The idea for the exhibition grew out of another Jewish Museum exhibit curated by Susan Tumarkin Goodman, senior curator emerita, “Russian Jewish Artists in a Century of Change, 1890 -1990.” In doing research for that 1997 exhibition, which included photography and other arts, she realized that the majority of Soviet-era photographers were Jewish, and she wanted to further investigate this subject. This show began as an exhibit of Soviet-Jewish photographers, and then was expanded to include masters like Rodchenko. Much of the material in the show is being shown in the U.S. for the first time.

In an interview, Goodman, who curated the current exhibition along with Jens Hoffman, a deputy director of the Museum, explains that “Jews, newly liberated from Czarist era anti-Semitism, came pouring into the cities, especially the new capital of Moscow, from the provinces. They were inspired by the Bolshevik Revolution and wanted to document the new society, in which they could participate. They were drawn to photography and filmmaking, relatively new and open fields that lacked a history of excluding Jews.”

Goodman says that while there were quite a few female artists at the time, there were very few female photographers. “It wasn’t so simple as going out and just taking pictures. They had to penetrate the publishing establishment and get commissions; the field required equipment and a lab to do processing, which they lacked.”

Many of the images are iconic, like Arkady Shaikhet’s “Express” (1939), a fast-moving train emerging through clouds, symbolizing movement into the future, and his “Red Army Marching in the Snow” (1927-’28), with soldiers on skis in two lines, artfully shot from above.

Georgy Zelma and other photographers were sent to document traditional cultures in faraway regions. His “Voice of Moscow” (1929), featuring two Uzbek men in traditional dress listening to a transistor radio, and “Three Generations in Yakutsk” (1929), shot in Siberia, highlight the multiethnic population. A series of expressive portraits by Moisei Nappelbaum include poet Anna Akhmatova (1924), writer (and later Novel laureate) Boris Pasternak (1926) and Stalin (ca. 1934). A Jewish photographer born in poverty in Minsk, Nappelbaum successfully made the transition from working as a photographer of the tsars to photographing Communist leaders and noted figures.

In sections titled “Staging Happiness” and “Physical Culture,” photographers, who were then expected to glorify Soviet life, show their subjects smiling and robust, like Georgy Petrusov’s “Sunbathing” (1935) and Rodchenko’s “A Jump Into Water” (1942-34), both shot from uncommon perspectives.

From beginning to end, the exhibition suggests connections between photography and truth, visual history and what remains, and between art and power.

In one gallery, two Russian speakers turned to me and said, in English, “This is beautiful but so, so sad.” For these Russian-Jewish immigrants now living in Brooklyn, it was difficult to look at these photos without being reminded of the millions of people killed by Stalin in the 1930s.

The exhibition also includes a gallery of film posters in bold style, and screenings of 12 films by Soviet directors of the era, including Sergei Eisenstein, Dziga Vertov, Yakov Protazanov and others in a small theater at the back of the galleries. The films are shown in their entirety, back-to-back, on a weekly schedule. The handsome accompanying volume by Goodman and Hoffman, “The Power of Pictures” (Yale University Press), features an essay by Alexander Lavrentiev, grandson of Rodchenko.