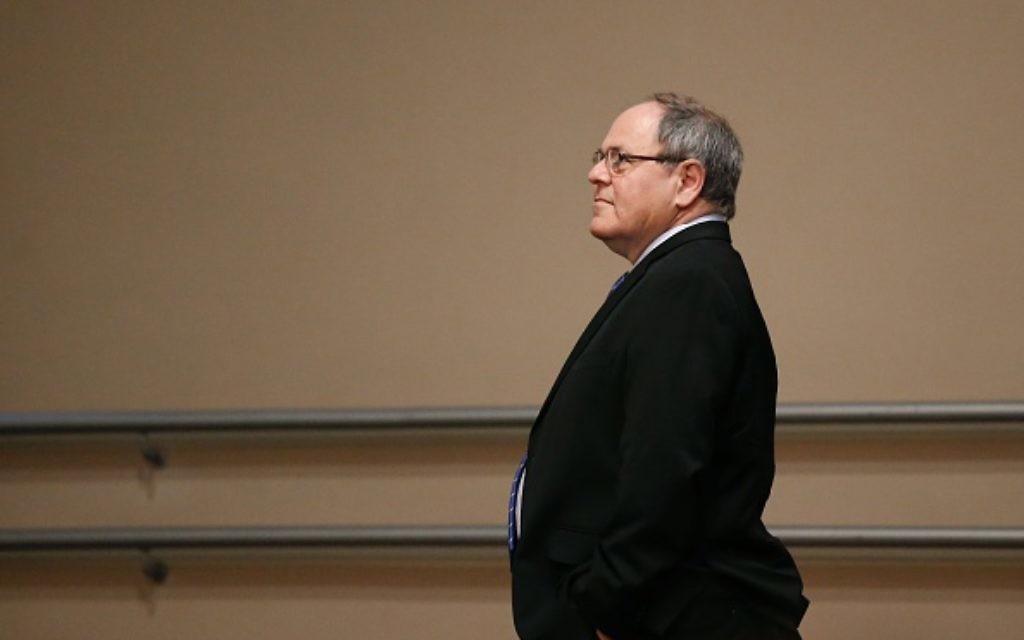 Amb. Danny Dayan walked out of a Bezalel fundraiser in NYC in protest of their criticism of Israel.

Noa Charuvi’s paintings — much like Charuvi herself — have a soft-spoken, thoughtful quality to them. They give off the impression she spent a long time contemplating the subject matter before actually touching her paintbrush to the canvas. Between the years 2009-2014, her subject matter was news clippings of demolished houses in Gaza and the West Bank: the kind of sad, remains-amidst-the-ruins snapshots that are sometimes spliced into Israeli news reports for a few fleeting seconds between interviews. “A big part of those works was about being uninformed,” she told me in a recent phone interview. “The information we have, as citizens, about what’s actually going on is always so limited.”

As an Israeli-American artist whose works are classified as political, I expected Charuvi would have a strong opinion about the recent debacle at the Bezalel Academy of Arts and Design fundraising gala here; Israeli news outlets framed the event either as “President of Bezalel slanders Israel, Israeli consul leaves in protest,” or “President of Bezalel defends freedom of expression, Israeli consul storms out.” But it was nothing as clear cut as that. “Mostly,” Charuvi said, “it was just confusing.”

On Jan. 23, the Friends of Bezalel held its annual gala in support of the institution at the Morgan Library and Museum. Charuvi, a 2005 Bezalel graduate, was an invitee. “The average Gala Event features a fancy dinner and an endless parade of speakers. Not this one,” the event’s press release stated, promising instead “real art, real interactions, real fun.”

“There was a fancy dinner, there were speeches … you know, the usual,” recalled Charuvi, who didn’t receive the press release.

Ambassador Dani Dayan, Israel’s consul general here, was among the first speakers. He praised Bezalel both for its innovative edge and for its role as one of Israel’s longstanding academic institutions in shaping the state’s art and history. Bezalel’s president, Adi Stern, also spoke of the importance of the school to the State of Israel: how the art and design coming out of Bezalel visually represented Israel around the world, and how Bezalel’s new building would revitalize Jerusalem (the academy is being relocated from its remote perch on Mount Scopus to the city center).

But then Stern also remarked on Bezalel’s significance in defending Israelis’ freedom of expression. “As I’m sure you all know, freedom of expression in Israel is under attack,” he said, to a wave of applause, according to Charuvi. “Much like here,” he added, drawing more handclapping.

At this, Dayan reportedly said loudly, “You are wrong.” When Stern continued in the same vein, the ambassador stood up and left. “People were shocked,” Charuvi recalled. “I mean, these are American Jews, they don’t do stuff like ‘get up and leave.’ It’s not in their vocabulary.

Later, she said, “To the people there, Bezalel represented this pure idea — the art of Israel,” she added later. To suddenly face a conflict between the state of Israel and its art, at a fundraising event, “was just confusing, and weird, and a little bit sad … for everyone.”

In an email to The Jewish Week, Dayan wrote: “I have no patience for anyone who raises funds abroad by defaming the state. I have no patience — and I use a diplomatic expression — for those who slander the State of Israel abroad in order to find favor and raise money. I was not going to give it a seal with my presence. Moreover, the moment a cultural event became a political one — as a civil servant I had to leave.”

Since the 2015 elections, Israel’s culture minister, Miri Regev, has made numerous threats to cut state funding for cultural productions and organizations she deems to be disloyal to the state. Most famous of these attempts is the 2018 “Culture Loyalty Bill,” which would have granted the culture ministry authority to cut state funding to theaters, museums, libraries and academic and other institutions that were seen as either negating Israel’s Jewish and democratic character, inciting violence and/or racism, defacing state symbols or mourning Israel’s Independence Day (which Palestinians mark as a day of bereavement). The bill passed in first and second readings in the Knesset but was narrowly defeated in the third.

Were she still a resident of Israel, Charuvi would have cause to worry. As it is, the Israeli consulate is an important professional ally. Now that she spoke to me, though, she’s nervous. “I’m going to a consulate event tomorrow. … I don’t want to alienate anyone, or step on anybody’s toes. I really hope I won’t regret talking about this,” she added.