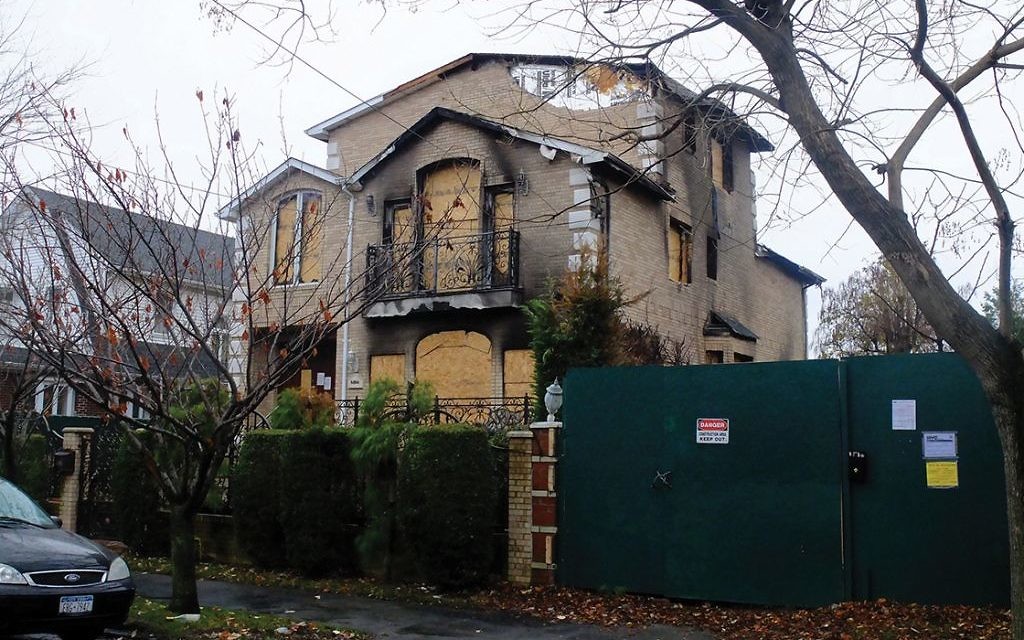 Update as of 12/7/15: Police released a photo of the suspect riding a motorcycle and wearing a scarf over his face, a green helmet and glasses. The image was taken as he sped away from the latest attack, which took place at 12:20 a.m. on Sunday. It was the second attack at 112-35 69th Road, home to Rabbi Zalmon Zvulunov of the Bukharian Jewish Center.

Update as of 12/2/15: After unscrambling a message left behind by the arsonist at the scene of a Nov. 25 fire at a Forest Hills construction site at 108-47 67th Drive, police have the name of a Forest Hills resident, who they suspect is responsible for at least six fires in the area over the past four weeks, according to another police source.

The close-knit Bukharian Jewish community of Forest Hills, Queens, is on edge this week following a string of arson attacks that appears to be targeting homes of Bukharian Jews that are under construction.

Seven fires have ravaged construction sites in the area in recent weeks, prompting an investigation by the NYPD Arson and Explosive Squad and igniting fear among locals.

Though no injuries have been reported, the blazes have spread to neighboring homes on more than one occasion. In the most recent fire, which occurred last Wednesday, the day before Thanksgiving, properties on both sides of the conflagration caught fire, Borukhov said.

The first incident took place on Nov. 8. A surveillance video of the suspect, a man in a dark hoodie, was released last week; the 112th Precinct is promising up to $2,500 for information regarding the arson. Though there have been seven fires, to date cops have only linked four of them to the suspect.

Police said the suspect set fire to combustible material at the sites, rather than relying on an accelerant. DNAinfo.com reported that sources at the NYPD told them investigators found a note, which appeared to be left by the suspect at one of the sites. Cops did not disclose the contents of the note. The police sources also said the suspect scaled a wall “like a ninja” during the Nov. 17 attack, according to the website.

Though NYPD officials said they don’t consider the incidents to be hate crimes, members of the local Bukharian community were not so reserved.

“If seven Jewish homes had been burned in France within a month, there would be much more of an uproar,” said Boris Yuabov, a doctor who has lived in the community with his three children for the past six years. He described standing with his non-Jewish neighbors and watching a site on the corner of his block collapse and burn to the ground.

“We are scared,” Yuabov said. “These fires are started in the dead of night in a neighborhood with many children and elderly individuals. This is a life-threatening situation.”

Allan S., a non-Bukharian member of the Forest Hills Jewish community who preferred to use his first name because he didn't want to be a target of any reprisal, referred to the eerily similar profiles of the torched homes’ owners as the “elephant in the room.”

Evan Bernstein, the Anti-Defamation League’s New York regional director said that while he understands that it’s too early to determine the motive behind the attacks, “the fact that seven separate fires took place in the same vicinity is deeply troubling, and we are confident that law enforcement will investigate these incidents as potential hate crimes.”

In response to the string of fires, about 20 members of the Bukharian Jewish community, as well as several other concerned neighbors, met at the local Bukharian Community Center on Sunday. Councilwoman Karen Koslowitz attended the meeting, though no representatives from police or fire departments attended, according to community members.

Speaking to The Jewish Week, Koslowitz described the events as “alarming” and said she is contacting Mayor Bill de Blasio to raise further awareness about the situation. Koslowitz said she could not comment on whether or not the incidents were targeting members of the Bukharian Jewish community.

“We can’t yet say who did it or what caused him to do it, but the police department is doing everything they possibly can to put these crimes to a speedy end,” she said.

The NYPD similarly declined to comment on whether or not the incidents are targeting the Bukharian community. The department confirmed that the attacks are being called arson and that an investigation is still underway.

Mark Kandkhorov, 29, a member of the Bukharian Jewish community who lives a block away from one of the arson sites, said that it is “obvious these attacks are not a random act.”

“These acts are intentional and designed,” he said, going so far as to compare the incidents to “terrorist attacks.”

“This is not just a Bukharian issue — this is a Jewish issue,” he said.

Meanwhile, in a case that is being investigated as a hate crime, the 52-year-old owner of West Side Judaica on the Upper West Side was beaten up in front of the shop in broad daylight on Monday afternoon. According to reports, the suspect punched the victim in the eye while exclaiming “[Expletive] you Jews. I’ll kill you. I’m a Muslim.” The suspect fled the scene on a razor scooter, police said.