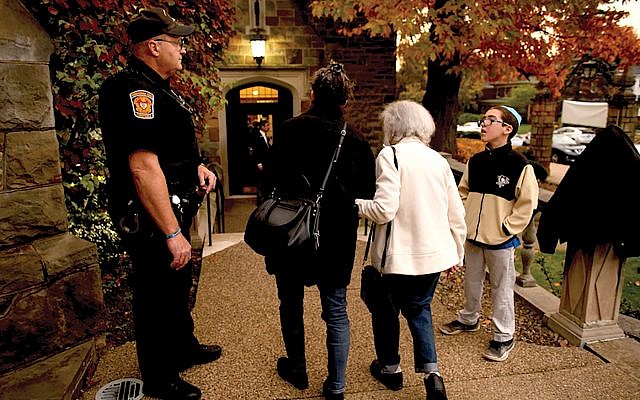 JTA  After a mass shooting in a heavily Jewish area shocked the nation, Rabbi Yakov Saacks felt like his Long Island congregation was at risk.

So the rabbi installed 17 cameras on the synagogue’s exterior that can zoom in to read numbers on license plates, as well as indoor cameras at each entrance. He began covering the windows with Kevlar, at around $800 each, making them shatterproof in case vandals hit them with rocks. And he hired armed security guards to protect the Hebrew school and Shabbat services.

When the sanctuary is especially crowded — on the High Holidays, for example — as many as three guards will patrol the building carrying guns and communicating by radio.

That was after the school shooting in Parkland, Fla., nearly nine months ago. Following the attack last month on a synagogue in Pittsburgh, Saacks said he feels vindicated in beefing up security. And he’s not done. In addition to protecting the rest of his windows, he is planning to install a metal detector at the building entrance as well as a double-door vestibule called a “mantrap.”

“What can we do? What can we do?” said Saacks, whose Chabad synagogue, the Chai Center, occupies an acre and a half in the upscale suburb of Dix Hills. “This doesn’t make me happy. It doesn’t warm your heart. We still try and maintain its openness, but what happened in Pittsburgh can happen anywhere.”

The added measures have changed Saacks’ budget, of course. He estimates that all of the physical protections will cost $150,000 in total. That does not include some of the window and camera costs, which he paid for partly out of a $50,000 grant from New York state. And the armed guards, contracted from a private security company at $40 an hour each, cost about $360 per week.

It’s a cost more synagogues are considering after a gunman entered the Tree of Life Congregation in Pittsburgh two weeks ago and killed 11 worshippers. Since that shooting, the risk of a violent attack has felt all too real for synagogues.

Thomas Ruskin, who runs the CMP Group, a private security company, already provides security for a handful of Jewish institutions in the New York City area. Since the Pittsburgh shooting, he says, dozens more have inquired about his services.

“Part of this has to do with the religious organizations’ budgets,” said Ruskin, a former New York police officer who is Jewish. “They’ve never put money aside or had a fund for just this purpose. … We never really had to worry about this. We always knew there was anti-Semitism, but we never knew someone would come into a shul in an upscale suburban community and shoot people in their backs.”

Ruskin charges $500-$1,000 for a written threat assessment and security recommendations; the price is deducted off the final cost if Ruskin’s team is hired to provide security.

For more than a decade, the federal government has provided funding to help synagogues bolster their security. The Nonprofit Security Grant Program and a related program run by the Department of Homeland Security have provided a total of more than $269 million to secure houses of worship and other institutions.

The money has gone largely to Jewish institutions, according to the Orthodox Union Advocacy Center, which lobbies for the grants. In addition, in October 2017, New York state announced $25 million in grants to help secure private schools and other nonprofits. Rounds of funding awarded this year in Brooklyn and Long Island went largely to Jewish organizations.

Since 2004, Jewish institutions have received resources and guidance from the Secure Community Network, an organization co-founded by the Jewish Federations of North America that oversees the community’s security needs and liaises with law enforcement. Paul Goldenberg, the network’s former chief, said that a close relationship with local law enforcement can help synagogues be prepared when attacks happen.

He cautioned against turning houses of worship into fortresses, noting that many synagogues in Europe have an intense security presence along with tight restrictions on who can enter and exit.

“Security has come with a tremendous cost to the Jewish community, not only here but abroad,” said Goldenberg, now a senior fellow for the Rutgers University Miller Center for Community Protection and Resilience. “Our institutions should not be surrounded by copper tin wire and bars.”

Still, some synagogues are opting for private security on-site. A consortium of 30 Chabad congregations on Long Island hopes to raise $1 million to provide armed guards once a week for a period of three years at an estimated cost of $50 an hour.

Union Temple, a Reform synagogue in Brooklyn, decided to increase its security after it was vandalized with anti-Semitic graffiti this month. It has hired a second security guard and is requiring visitors to sign in and show ID. It is also making its windows shatterproof.

“We want to be warm and welcoming, we don’t want to live in a police state, but that’s the line you have to find,” said Union Temple President Beatrice Hanks. “The parents have been most concerned about this. … They’d rather be slowed down at the drop-off than not have security.”

Other synagogues have opted for volunteer security guards recruited from their own pews. The Community Security Service, a Jewish nonprofit founded in 2007, has trained 4,000 volunteer security guards for synagogues, teaching them how to spot and respond to threats. Jason Friedman, its executive director, estimates that 75 of its trainees are actively guarding their synagogues on any given week. For a synagogue with 500-member units, CSS asks for a suggested donation of $1,800.

Even if synagogues opt for a paid guard, he said, a community member should accompany them in order to help identify congregants and provide a reassuring face at the door for the people who are supposed to be there.

“Everyone in the Jewish community is thinking about security now,” said Friedman, who has also received a flurry of inquiries since the Pittsburgh shooting. “That couldn’t be said a few weeks ago. If their options are a guard or nothing, definitely go with the guard, but you have to give that guard a chance to be successful. That means pairing them with someone from your institution.”

Romemu, a Jewish Renewal congregation in Manhattan, has gone all in on security in the weeks since the Pittsburgh shooting. In addition to increasing the number and hours of its armed guards (the congregation’s executive director, Jeff Cahn, did not want to specify those figures), it has tripled its security budget and plans to apply for the state and federal security grants.

To maintain a friendly exterior, however, the congregation makes sure its security guards dress in business-casual attire, don’t conspicuously show their weapons and greet regulars as an usher would.

“They are not menacing. They are very friendly people,” Cahn said. “They welcome everybody with a hearty ‘Shabbat shalom’ and know everybody’s names. They are part of our family.”

Even without armed guards, Ruskin said, there are basic steps a synagogue should take to secure itself, from locking the doors to having an evacuation plan. If a shooter encounters a locked door — let alone an armed guard — he may decide to go somewhere else, Ruskin said. And building staff should know some basic pieces of information — like the building’s address.

“When you have to call the police, 911, you need to know your address,” he said. “You’d be surprised how many educators, staff, even clergy don’t know the address.”

Synagogues may forgo an armed guard in order to maintain a welcoming atmosphere. Many were put off by President Donald Trump’s initial comments on the shooting at the Pittsburgh synagogue, which did not have a guard.

“If they had an armed guard inside, they might have been able to stop him immediately,” Trump told reporters. “Isn’t it a shame that we even have to think of that, inside of a temple or inside a church? But certainly the results might have been far better.”

Critics charged that Trump was blaming the synagogue to deflect from the gun control debate, although it was the rare synagogue that didn’t start thinking about its security in the days that followed.

Still, some activists say that while having armed security makes some congregants feel safer, it may make others feel under threat.

“Investing in increased police presence and security will militarize our community spaces,” reads a statement by Jews for Racial and Economic Justice, a progressive activist group. “It will make synagogues and Jewish communal spaces less safe for Jews of color, trans Jews, Jews with disabilities, and other beloved members of our communities.”

But those who are hiring the guards see security as a threshold issue.

Rabbi Tuvia Teldon, director of Chabad Lubavitch of Long Island, who is spearheading the $1 million campaign, said that after the Pittsburgh shooting, he wants to make sure one of his affiliate synagogues isn’t next.

“They want to know there’s someone there who’s going to be watching out for them,” he said. “You need to have someone there who’s on the ground. We want to put up a sign in every Chabad house that this is not a soft target. There are armed guards here.”