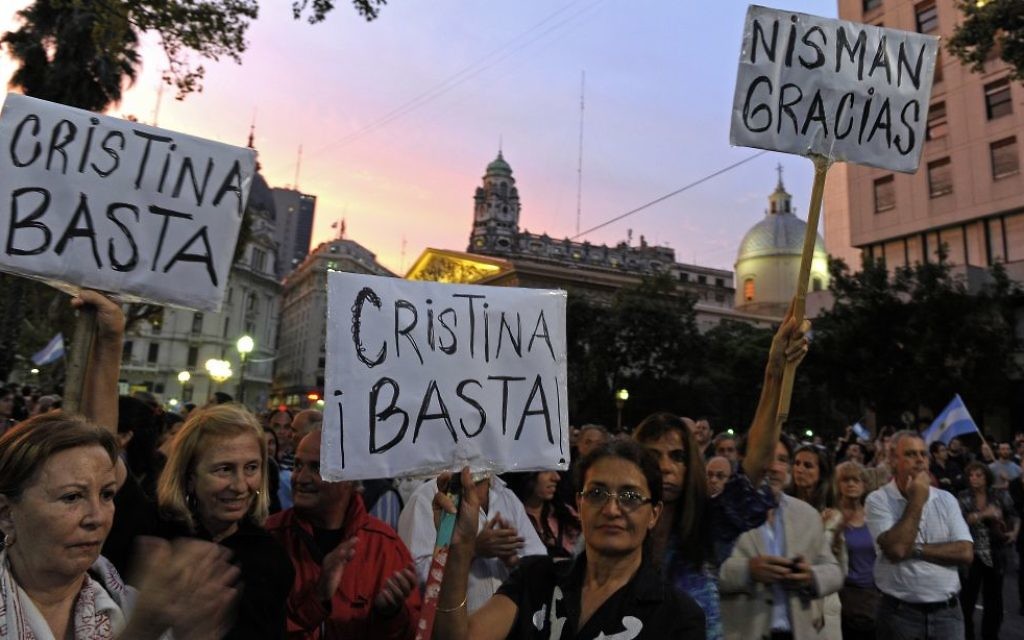 Buenos Aires, Argentina — Argentina should have answers about the death of prosecutor Alberto Nisman by now, the president of the South American nation’s Jewish umbrella organization said.

“We respect the Justice Department’s decisions, but after eight months, at least we should know what happened to the prosecutor,” DAIA President Julio Schlosser said Tuesday night at an event in Buenos Aires marking the 80th year of the organization.

Schlosser also said that “21 years after the AMIA Jewish center bombing we have no one guilty, no one paying for the crime in jail.”

Nisman, who was investigating the 1994 Buenos Aires bombing that killed 85, was found dead in his city apartment in January. The government has yet to issue a ruling on the cause of his shooting death.

The prosecutor had accused Argentina’s current president, Cristina Fernandez de Kirchner, and foreign minister, Hector Timerman, who is Jewish, as well as other politicians of covering up Iranian suspects in the case.

Forensic experts have differed on the cause of Nisman’s death. Many have said it will be difficult to establish one unified version of how Nisman died, with some experts believing it was suicide and others murder.

Fein has not yet released a final ruling.

“I cannot determine for the moment whether it was a suicide or a homicide,” she said on March 6, when she convened the authors of the independent forensic report to examine their evidence.

Some analysts believe that she wants to wait to issue the final ruling after the presidential elections.

At the DAIA event, politicians, foreign ambassadors, NGO representatives, businesspeople and Jewish leaders were among the 1,200 guests who gathered to celebrate an organization that started with 28 groups under its umbrella and now has 125 and 25 local branches. One presidential candidate and representatives of two others for the October elections also were on hand.

“We have here today leaders of the ruling party and also from the opposition and from minor parties. This is an example of the society that we want,” Schlosser said. “This is the Argentina that we will want to leave our children, with people gathering together and sharing.”