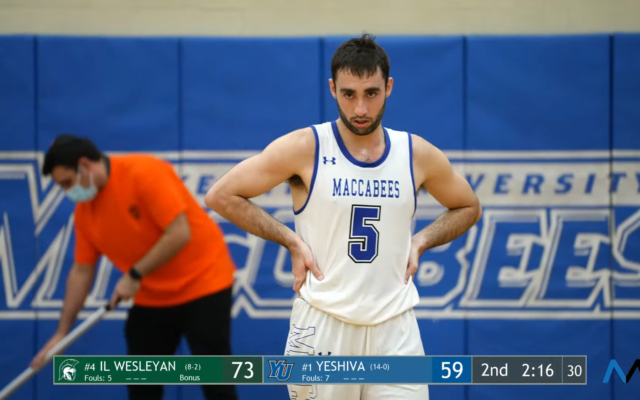 Ethan Lasko of the Yeshiva University Maccabees looks on in the final minutes of the team’s game against Illinois Wesleyan University, Dec. 30, 2021. (Screenshot via MacsLive)

Good Monday morning, New York. Its a new year, New York City has a new mayor, and we have some new reasons for hope: According to The New York Times, “Omicron is so contagious that it will have infected a meaningful share of the population, increasing the amount of Covid immunity and helping defang the virus.” At a high human cost, we should add.

ALL GOOD THINGS: Yeshiva University’s men’s basketball team’s history-making, 50-game winning streak came to an abrupt end Thursday night as the Maccabees suffered a bruising 73-59 loss at home to Illinois Wesleyan University. “The streak is over but the quest for a championship continues,” the Y.U. athletics department tweeted. (JTA)

THE YEAR THAT WAS: Orthodox New Yorkers flee for Florida. Turmoil at an East Side synagogue. Padma Lakshmi makes latkes. These are just some of the most-read New York Jewish Week Stories of 2021.

PROTEST: Around 100 people protested antisemitism at a rally in Bay Ridge, Brooklyn Sunday, following the Dec. 26 attack there on two Jewish college students, including one wearing an Israel Defense Forces sweatshirt. The rally, which drew a small gaggle of counter protesters, was organized by newly elected New York City Councilwoman Inna Vernikov. (Times of Israel)

ON THE JOB: Brad Lander was sworn in Saturday as NYC’s 45th comptroller, pledging to “ensure that City government is budgeting wisely, investing strategically, and operating effectively.” The Jewish Democrat, 52, who takes over from Scott Stringer, is a Brooklyn progressive who recently said he would try to coax Orthodox yeshivas to improve their secular curricula.

ON THE MOVE: The Jewishly affiliated Touro College announced plans to move its main campus to 3 Times Square, a  Midtown skyscraper. Touro says eight floors of the building will be turned into classrooms, science and technology labs, offices and event space, accommodating 2,000 staff and students. Touro, with outposts around the city and elsewhere, plans to move into the new space in January 2023. (New York Post)